ADATA released their third generation XPG DDR3 memory sometime mid last year – the ADATA XPG V3 DDR3 Overclocking Memory. Aside from being a high performance / overclocking memory, one of its main and new features is its detachable and interchangeable aluminum fins. This doesn’t help in terms of performance actually, but it certain ads to eye candy and will give the user an option to match their system’s color. I wasn’t able to review the XPG V2 so I’m not really sure how the V3 differs in terms of performance. The specific model that I have here is the ADATA XPG V3 DDR3 2400MHz 8GB (4GB x2) Memory Kit, (AX3U2400W4G11-DBV-RG) CL 11-13-13-35 with 1.65V rating. Without further delay, let’s take a closer look at the XPG V3 and find out how fast this memory can go. According to the company, they designed the ADATA XPG V3 Series DDR3 DRAM module to meet the needs of PC enthusiast, overclockers and gamers who require outstanding stability. One of its main features is the detachable fins to match your system’s color theme. Unfortunately the removable fins only come in two colors, gold and red. But you can repaint the other one to match your system’s color theme.

ADATA is also using Thermal Conductive Technology (TCT) which makes every chip have contact with the heat sinks directly, ensuring IC and PCB operate in an environment of equal temperature. It also features an 8-layer PCB with 2oz copper that helps to reduce the electric resistance and consume less power, which enhances the integrity of signal transfer.

The ADATA XPG V3 DDR3 series was released a few weeks after the official announcement of the Z97 motherboards. This memory fully supports Intel Z97 platform, as well as XMP 1.3 profile. The highest model is able to reach speeds of up to 3100MHz with a transfer bandwidth of up to 24.8GB/s. Below is a screenshot of the AIDA64 SPD information of the sample I got. 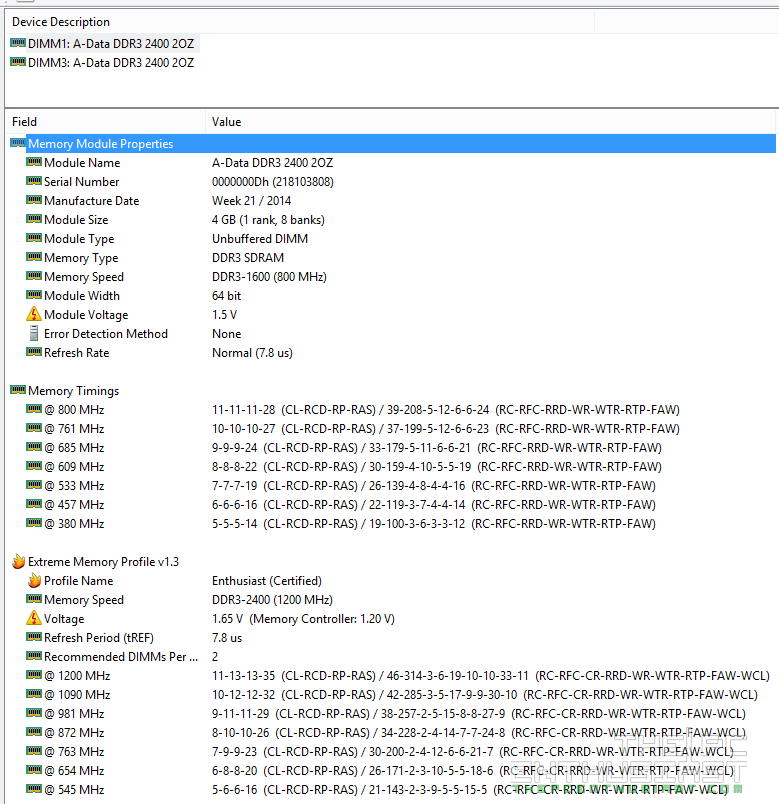 The ADATA XPG V3 8GB DDR3 2400 memory kit comes in a nice and simple packaging. At the back you can see the extra Gold aluminum fins, and below are instructions on how to replace or change the aluminum fins. 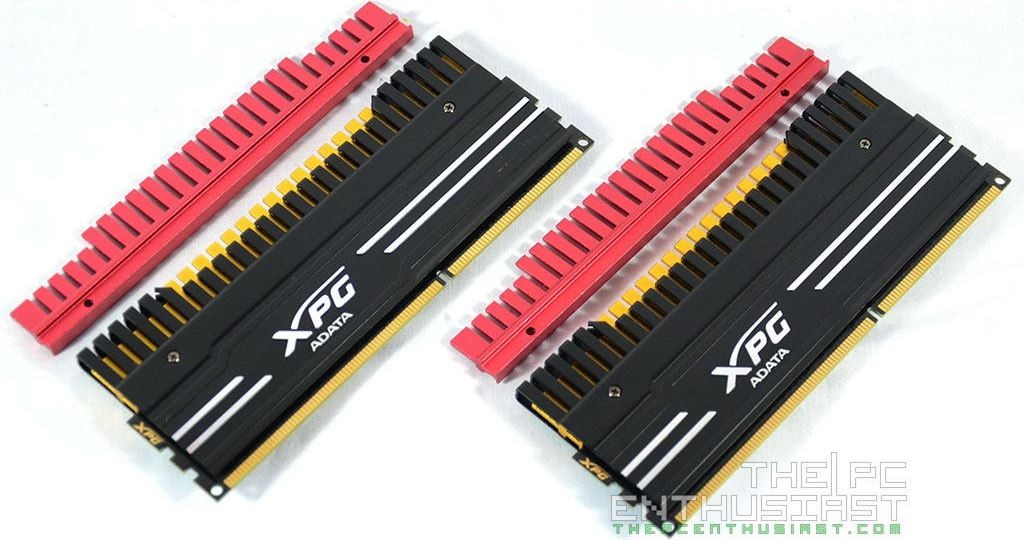 Slide back in the other color and don’t forget to screw it properly. Unfortunately, the package only comes with Red and Gold aluminum fins. You may, however, repaint the other set of fins to match your system’s color. 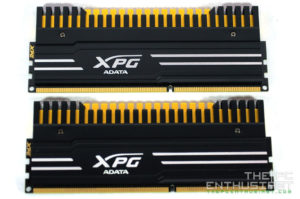 If you own one of Asus’ Z97 motherboard with champagne gold heatsink, it may not match the color of the Asus Z97’s heatsink, since ADATA’s Gold looks more yellowish. Removing all of the heatsink was relatively easy as well. Inside you’ll see a number of SKhynix H5TQ4G83MFR chips. The SK hynix H5TQ4G83MFR “is a 4,294,967,296-bit CMOS Double Data Rate III (DDR3) Synchronous DRAM, ideally suited for the main memory application which requires large memory density and high bandwidth. SK Hynix 4Gb DDR3 SDRAMs offer fully synchronous operations referenced to both rising and falling edges of the clock. While all addresses and control inputs are latched on the rising edges of the CK (falling edges of the CK), Data, Data strobes and Write data masks inputs are sampled on both rising and falling edges of it. The data paths are internally pipelined and 8-bit prefetched to achieve very high bandwidth.”

In testing the ADATA XPG V3 8GB DDR3 2400MHz, I’m using my Asus Maximus VI Impact system powered with an Intel Core i7-4770K clocked at 3.9GHz. I used the XMP Profile to set the memory to run at 2400MHz. If you won’t set the XMP Profile via your motherboard’s BIOS, the memory will run at a much lower speed, in my case it down clocked to 1600MHz. Below are the rest of the system specs: 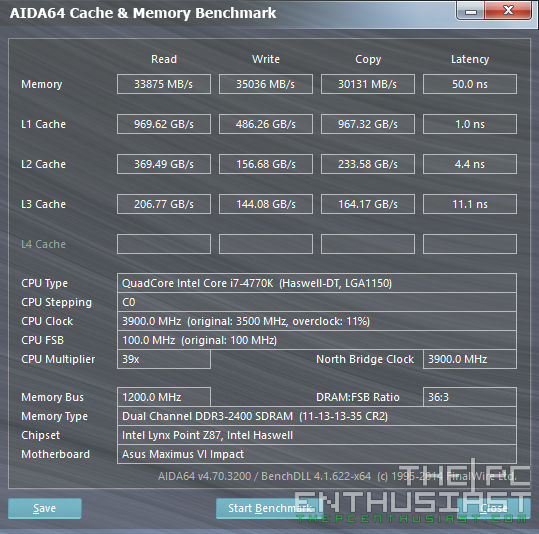 The results above are good but not phenomenal. Like I said earlier I didn’t get the chance to review the ADATA XPG 2 so I don’t have an idea how the 2400 version will perform. For comparison purposes only, below is a table comparing the XPG V3 8GB DDR3 from competing DDR3 memory modules running at 2400MHz as well. Please do note that the AIDA64 Memory Benchmark results below were derived from tests conducted at a different time and/or different system.

When I tried to overclock the ADATA XPG V3, I wasn’t able to push it any further. I also tried to lower the memory timings or tighten them, but it became unstable and won’t boot. I guess the 2400MHz is pretty much its limit. Despite lacking the availability, the ADATA XPG V3 8GB DDR3 2400MHz memory kit is not a bad product. It’s still a good memory kit and the interchangeable / removable aluminum fins is a plus factor. However, it wasn’t really much of an overclocking memory, since it was difficult or at least impossible to overclock it further, or even adjust its memory timings.

When it comes to performance, it’s not the fastest in its class but it doesn’t mean that it’s a slow memory. It still performs great and is somewhat on par with other DDR3 2400MHz. There are other DDR3 2400MHz memory kits that could perform better than the ADATA XPG V3, but may be priced higher. Like I said, based on my experience, real world performance may not be observed despite having a 1,000MB/s to 3,000MB/s performance difference. You’ll only see the difference while benchmarking.

Finally, the ADATA XPG V3 8GB DDR3 2400MHz memory kit is a cool looking memory with its serrated fins, and interchangeable accent. When running at its rated speed 2400MHz CL 11-13-13-35, it was pretty much stable and didn’t give me any problems at all. I can’t give it a solid highly recommended award right now since pricing and availability is pretty much vague. If the price isn’t far from its competitors or better yet more affordable, this could be a good option. For now a recommended award will have to suffice. Or you might want to consider getting the ADATA XPG V2 DDR3 instead.