AMD officially announces the Radeon RX 470 and RX 460, the little brothers of the Radeon RX 480. We know that a cut down version of the RX 480 (Polaris 10) and a smaller version Polaris 11 will come out later, but AMD decided to focus on the launching of the RX 480 first. By now, we have a much better idea what the new Polaris architecture is all about and the capabilities of the new RX 400 series graphics cards. The NDA for the RX 470 and RX 460 is now lifted and we can finally share to you what to expect on these two entry to mid-range graphics cards. The Radeon RX 470 is basically geared towards 720p and 1080p gaming, and is said to be capable of maintaining 60 FPS with AA enabled. Well that’s what AMD said on their press slides. But depending on the games you play and the graphics settings, that statement may or may not be true. For example, the Radeon RX 480 can’t even reach 60 fps average on Crysis 3 based on our benchmarks. How much more the RX 470 which is a cut down version of the RX 480. I think it’s a case to case basis, but it doesn’t mean AMD is false about their statement.

AMD showed 4 games that can be played with the Radeon RX 470 HD resolution at Ultra settings. Meanwhile, the AMD Radeon RX 460 is the company’s solution for E-Sports gaming, MMORPGs or MOBAs. Currently the top games in this category are DOTA 2, Overwatch, CS: Go and few others. The RX 460 has a slightly different GPU core on it. It’s powered with a Polaris 11 GPU, a smaller version of the Polaris 10. Not a cut down, but a smaller core with 14 compute units and capable of up to 2.2 TFLOPs of compute performance. It has 896 stream processors, 16 ROPs and its core has a clock speed of 1090MHz base / 1200MHz boost. It comes in two memory variants, 2GB or 4GB GDDR5 with 112 Gbps memory bandwidth, 7Gbps effective data rate and runs on a 128-bit memory interface. It has a typical board power of less than 75W. The Polaris 11 GPU will also be used not only for desktop, but in notebooks or laptops as well. In terms of performance, it should be able to offers above 60 FPS on MOBAs or E-Sport games at “high settings”. Below is a slide from the presentation showing the performance improvement of the RX 470 over the previous R7 260X. I wonder how the RX 460 would par against the GeForce GTX 950. Both cards are geared towards the same target market. Hopefully, the RX 460 would compete not only in terms of performance, but in pricing as well. 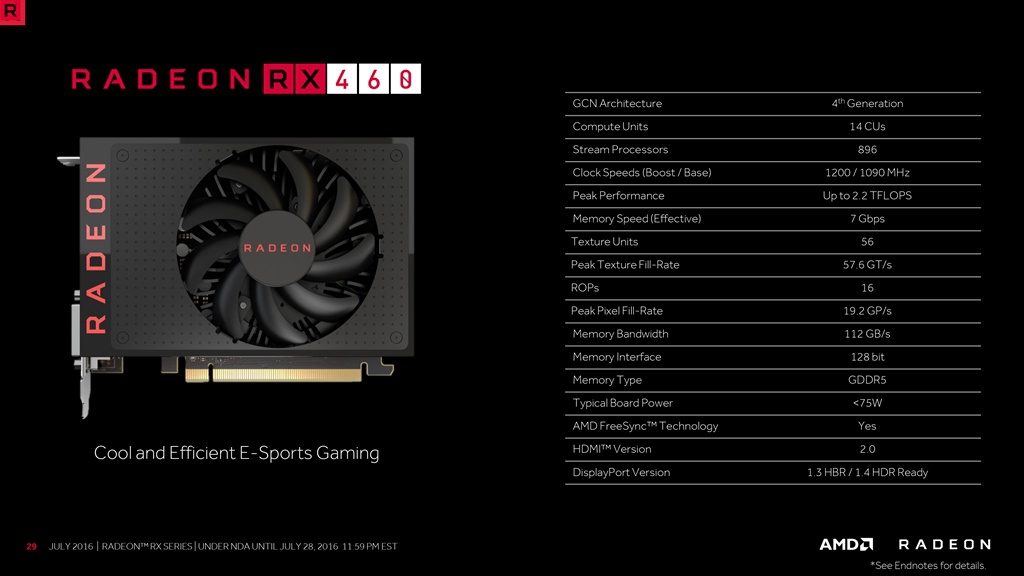 AMD hasn’t disclosed yet the retail prices for both the Radeon RX 470 and RX 460. But the RX 470 should become available by August 4, and the RX 460 by August 8. By then, we should be able to know their respective prices as well.