After AMD officially announced the Radeon R7 265, Asus also announced their Asus R7 265 DirectCU II (R7265-DC2-2GD5) graphics card, featuring Asus’ award winning DirectCU II cooler which is 20% cooler and 3x quieter than reference cooler, Super Alloy and other Asus standards for GPU tweaking that supports overclocking. The Asus R7 265 does not have a factory overclock settings. It has a base clock of 900MHz and boost clock of 925MHz, while its 2GB memory is clocked at 5600MHz. Check out the rest of its features and specifications below. 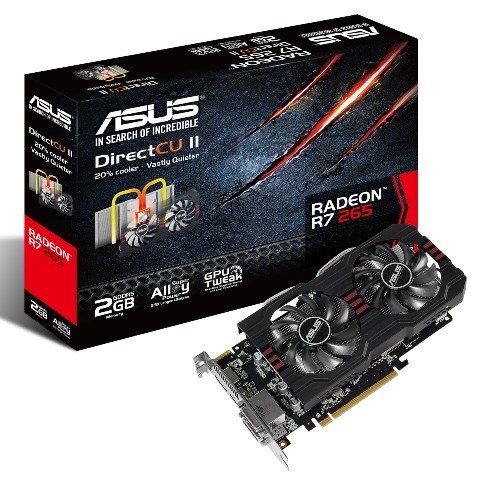 R7 265 DirectCU II has a base clock speed of 900MHz that ramps all the way up to a blistering 925MHz when boosted. The new card also supports resolutions of up to 2560 x 1600 pixels, so gamers can enjoy both fantastic performance and superb visuals. Exclusive DirectCU II technology for super-cooled, ultra-stable performance
The Asus R7 265 DirectCU II has a unique advantage in the shape of DirectCU II, which puts highly-conductive copper cooling pipes in direct contact with a card’s GPU so heat is dissipated quickly and with extreme efficiency.

This innovative engineering enables R7 265 DirectCU II to run the Radeon R7 265 GPU to run up to 20% cooler and three times (3X) quieter than reference, so gamers can enjoy ultra-stable play with very low noise, even at Full HD resolution.

With Super Alloy Power components on board, R7 265 DirectCU II has a lifespan that’s up to up to two-and-a-half times (2.5X) greater than reference. Its heat-defeating properties mean that the card can be overclocked safely to run up to 15% faster, too.

Advanced ASUS overclocking controls and exciting live-streaming technology
The new ASUS R7 265 DirectCU II card has another unique advantage — GPU Tweak. This exclusive ASUS tool that helps users to squeeze every last drop of performance out of the Radeon R7 265 GPU. This includes the ability to control finely GPU and video-memory clock speeds and voltages, cooling-fan speeds and power-consumption thresholds in real time. GPU Tweak means that overclocking is both easy and can be carried out with high confidence.

As well, the GPU Tweak Streaming tool lets users share on-screen action over the internet in real time — so others can watch live as games are played. It’s even possible to add a title to the streaming window along with scrolling text, pictures and webcam images. Asus hasn’t disclosed its MSRP for their R7 265 DirectCU II, but if the AMD Radeon R7 265 is priced starting at $149.99, most probably Asus’ R7 265 will be priced somewhere in between $150 to $200 USD. This card is also expected to become available in the following weeks to come.