One of AMD’s upcoming graphics card is the Radeon R9 390X, which is the direct successor of the R9 290X. Based on previous reports and rumors, it won’t feature the new HMB technology and it will just be a “rebrand” or “refresh” of the previous R9 290X. We are not entirely sure yet if it’s just an improved R9 290X, but expect that it will definitely be faster than its predecessors. All the good stuff and new technology will be featured in the (very) soon to be revealed AMD Radeon R9 Fury and R9 Fury X, which are said to directly compete with NVIDIA’s GeForce GTX 980 Ti and TITAN X. For now, what we have here is a specifications of the upcoming AMD Radeon R9 390X DirectCU II OC (R9390X-DC2OC-8GB5), thanks to PCTuning. Check out more details below. The Asus Radeon R9 390X will features 2816 stream processors, 176 TMUs and 64 ROPs. It will have a higher clock speed of 1070MHz and higher memory capacity of 8GB GDDR5 compared to the R9 290X. The memory is clocked at 6000 MHz effective with 512 bit memory interface. In terms of connectivity options, it will have an HDMI port, a DisplayPort and two DVI ports. It will draw power from two 8-pin PCIE power connector. 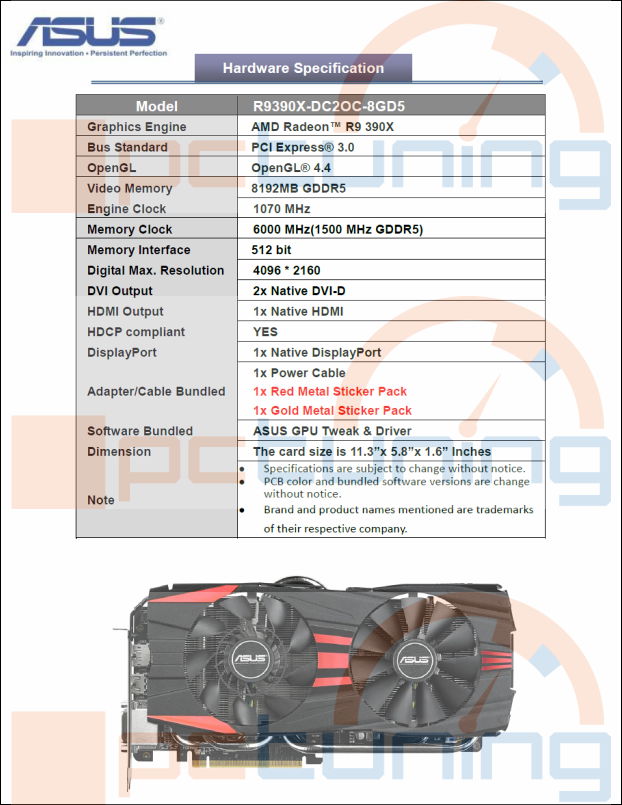 It seems that the R9 390X is no more than a beefed-up R9 290X and will most likely feature an updated version of the Hawaii XT GPU, Grenada. AMD didn’t let its AIB partners to disclose any information or teasers of the upcoming Radeon R9 3900 series graphics cards during Computex 2015. Instead, AMD will have a full reveal at the upcoming E3 Event this coming June 16, 2015. It is also reported to have a retail price of $499 USD, and expect that custom cooled R9 390X, like the Asus R9 390X DirectCU II OC will come with a higher price tag.