Desktop monitors have greatly evolved and improved over the years; from the ancient bulky and heavy CRT monitor, to the almost bezel-free super bright IPS display. Nowadays, monitors do not come only with a wider and larger screen size, but they also produce brighter and more vivid pictures and images which are pleasing to the eyes. Today, let’s take a look at the Asus VX279, a 27-inch monitor featuring an IPS panel, 178° wide viewing angle and many more. The Asus VX279H is also similar with the Asus VX279Q which is currently available in US region. Check out my review below and find out if the Asus VX279 is the right monitor for you. The Asus VX279 is a 27-inch full HD AH-IPS LED display featuring a wide viewing angle in a super thin bezel. It has dual HDMI/MHL ports for multi device connections and MHL device battery charging. Since this is a full HD display, it has a native resolution of 1920×1080 and 16:9 aspect ratio.

It has a maximum brightness level of 250 cd/㎡, that is significantly brighter compared to an LCD display, like the Samsung P2370 that I am using most of the time. The Asus VX279 features Asus’ exclusive VividPixel Technology where it enhances outline, sharpness and color saturation of images and videos to deliver high-quality visual experience.

Splendid Video Intelligence Technology is also present in this monitor. This technology optimizes video performance and image fidelity by enhancing color, brightness, contrast, and sharpness. 6 preset video modes (Scenery, Theater, Game, Night View, sRGB and Standard) can be selected via a hotkey. And let’s not forget the QuickFit Virtual Scale technology that allows you to preview photos and documents on-screen in their actual size prior to printing.

I’ll discuss to you the rest of its features while we take a closer look at the VX279 below. The Asus VX279 sample that I got came in with its retail box, but the accessories where no longer complete. The complete packaging should include the following: VGA cable, Audio cable, Power cord, Power adapter, Quick start guide, HDMI-to-DVI cable (optional), HDMI cable (optional), Warranty Card, MHL cable (optional). The monitor itself is protected by a Styrofoam, but I recommend that you should handle the box with extra care when the monitor is still inside the box, since the Styrofoam is not that thick and the monitor is not fully covered on the front side. The pictures above show the front view of the Asus VX279 with its power turned off and the other one turned on. The VX279’s display features a non-reflective and matte finish, which I think is very helpful specially if the monitor is placed near a window. You can’t see any reflections that would interfere with your viewing. There are two built in speakers in the Asus VX279 that are located at both side. Don’t expect them to be great speakers though, that can be a substitute for your external speakers. The control panel is located on the lower right hand side section of the monitor. There are labeled for your convenience but the buttons are located under the frame. The buttons are also touch sensitive. You don’t have to push them to activate a button. But this feature can have its downside. Unfortunately the labels are not backlit, which I seriously think Asus should consider putting back lights on them. It was hard to navigate the menus at night since you can see the labels at all. Plus, since the buttons are (very) touch-sensitive, I often find myself pressing the wrong button. Well, enough with the minor complains and let’s move on to the rest of its features. Overall, I find the Asus VX279 to have a simple and “classy” design. It doesn’t have a bezel-free design or ultra-thin bezel. But the bezel is just only 0.8mm thin, which is pretty slim, compared to other monitors. I don’t want to think that it’s “frameless”, since it still does have frames, only that they are thinner compared to most monitors out there. This makes it ideal for a multiple setup display, great for Eyefinity or NVIDIA Surround setups. 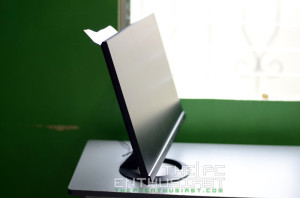 Not only that the Asus VX279 has a thin bezel, the monitor itself is only 17.5mm at its thinnest point, making it very slim and sexy. The monitor is attached to a non-removable “neck” that is connected to a stylish circular stand. You can tilt the monitor downwards and upwards, which I think is great. But you can’t adjust the height of the display, not to mention there are no holes for mounting it as well. You’ll have to place it on top of a box or something if you want the monitor to be a little bit higher. At the back of the Asus VX279, you’ll see two HDMI/MHL ports, a VGA port, headphone and audio port, and the power connector located right in the center, just above its neck. Now let’s take a look at the monitor’s Menu/Functions below.

The Asus VX279 has five main menus – Spendid, Color, Image, Input Select and System Setup. In the Splendid menu this contains preset settings where you can choose from Scenery mode, Standard mode, Theater mode, Game mode, Night View mode, and sRGB mode.  I prefer to use the sRGB mode when working, and the Scenery mode while playing or watching movies.

Meanwhile, if you want further customization go to Color menu where you will have access to brightness, contrast, saturation, color temperature and skin tone. The Image menu lets you adjust the sharpness, aspect control, VividPixel, ASCR, position and focus of the monitor. The Input Select menu lets you choose the source of your input signal. And finally, in the System Setup menu is where you can access the Splendid demo mode, change volume, select GamePlus, Eco Mode, OSD setup and language.

I have been using the Asus VX279 for several weeks and that includes gaming, watching HD movies and using the monitor for work. But to give you a proper demonstration of the monitor’s performance, I used PassMark MonitorTest to run some tests. I took four shots each test using a DSLR camera. I’m not an expert in photography and I was not able to capture the colors 100% exactly the same the way I saw it with my own eyes. So the images below are not 100% accurate in terms of colors or brightness, but more or less that is how the monitor looks when I took the photos. Also, the room didn’t have any other light except the light coming from the monitor itself, and the mouse. Above you see four pictures of the Asus VX279. One is taken directly in front, and the three other are taken from an angle (top, bottom and left side). As you can see, the monitor is very viewable even in different angles thanks to its AH-IPS panel. There were some bleeding but not very noticeable at all. Some people might notice it but generally the display was looking good. Colors were also accurately displayed even when viewed from different angles. I am really impressed with the Asus VX279’s performance. I enjoyed watching movies with this monitor and gaming as well. But I have to comment on the gaming aspect. There are PC gamers out there who are not bothered with the kind of monitor they have. As long as they can play the games with no lags or anything that might interfere with their gaming, then they are okay. But there are gamers who want a fast monitor, that doesn’t produce ghosting or motion blurs, and even flickering or tearing while playing games. Unfortunately guys, this monitor is not immune to those.

The Asus VX279 has 5ms 75Hz response time. It’s fast, but not as fast as a 1ms/144Hz monitor. When I was playing games with the monitor, I observed flickering and tearing specially when V-Sync was not turned on. Motion blurs are also noticeable specially at higher frame rates. But then again, the Asus VX279 is not really a gaming monitor, like the ASUS VG248QE and other VG series. So one can’t really complain if the VX279 is prone to motion blurs or screen tearing. If you want a monitor that is really geared towards gaming, then better get the ASUS VG248QE or the ASUS VG278HE instead.

One thing I also noticed right after using the Asus VX279, texts are not that crisp or fine. I can see that it were somewhat pixelated compared to my 23-inch Samsung P2370. I’m not saying that the P2370 is better than the VX279, heck no. The VX279 is far better than my current monitor. But since it is a 27-inch monitor in a 1920×1080 resolution, it has lesser pixel density or pixel per inch compared to a 23-inch 1080p monitor. Perhaps that could be the reason why pixels where somewhat noticeable in the Asus VX279, specially with texts.

In the US, the Asus VX279Q is now available with an SRP of $299. Remember the price is at the time I posted this review. You might stumble into this review a few weeks or months from now (or even a year or so), and by that time I’m sure prices have already change. Check out the link for updated pricing and availability.

After testing and using the Asus VX279 for several weeks, there’s one thing I want to do, call my friend from Asus and ask him if I can keep the monitor. Why? Because I do not want to go back to my old monitor as my main monitor, really! Unfortunately, I have to return it to them. Watching movies on the 27-inch Asus VX279 was fantastic. We don’t have to position our heads parallel to the display anymore; we can perfectly watch movies/videos at any angle we want. The display was also significantly brighter compared to my old LCD monitors. Editing photos and videos was also a better experience, but it did take a little time for me to adjust regarding the text, though.

I also like the design in general and the thin bezel. But I think Asus can do better than that by making the bezel thinner than 0.8mm. I really can’t complain about the quality of built-in speakers, but I wish Asus would put back lights on the labels for the menu, specially that they are using touch sensitive buttons. You can’t see the labels at all, specially if there are no other lights (except the one coming from the monitor itself). It’s really hard to guess if your finger is positioned beneath the right button that you want to press. And one thing that I didn’t like about this monitor is that it didn’t have VESA mount or wall mounting support, or even a height adjustment.

Well, most of my rants where really not on the display itself, but on the other features or functions which Asus could have incorporated in this monitor. And those are just minor complaints, and serves as room for improvements that we would like to see in their upcoming monitors. Nevertheless, the 27-inch Asus VX279 monitors is a well built and great IPS display monitor. Considering the overall design and the price of the Asus VX279, it deserves the PC Enthusiast’s Highly Recommended Award.