SupremeFX is engineered with effective shielding to prevent electromagnetic interference, preserving the integrity of audio signals for the best quality. It also has a 300-ohm-headphone amplifier to drive some of the very best headphones available for exceptional, immersive gaming audio and music-listening. The illuminated red-line shielding is even customizable, enabling the user to create eye-catching lighting effects.

For a helping hand on the battlefield, Sonic Radar II displays a stealthy overlay that shows what opponents and teammates are up to, all managed via a simple control panel and customizable game list. This allows the player to see the direction and origin of key in-game sounds, and practice enemy-pinpointing skill. It also includes exclusive Audio Enhancement technology to clarify every blast.

The Asus Z170 Pro Gaming has the very latest Intel Gigabit Ethernet (i219-V) integrated to reduce CPU overhead and deliver exceptionally-high TCP and UDP throughput, freeing up more computing power for gaming and gameplay. It also has ASUS-exclusive LANGuard with signal-coupling technology and premium surface-mounted to ensure reliable connections and better throughput, plus electrostatically-guarded and surge-protected components (ESD Guards) for 1.9X-greater tolerance to static electricity and 2.5X-greater protection (up to 15KV) against surges. 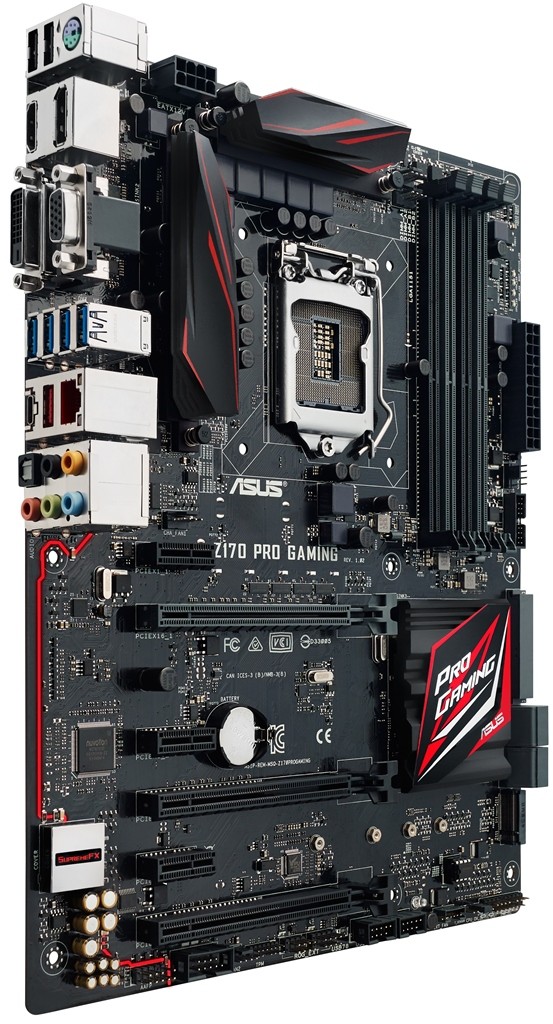 The Asus Z170 Pro Gaming includes Pro Clock technology, a dedicated base-clock (BCLK) generator designed for 6th-generation Intel processors that allows overclocked base-clock frequencies up to 400MHz. This custom solution works in tandem with the ASUS TPU to enhance voltage and base-clock overclocking control. Boot times can be reduced, jitter is lowered and stability is increased under heavy overclocking – providing an exciting new way to boost performance to the extreme.

It also has durable capacitors engineered to resist extreme temperature variations of between -55°C and 105°C – 110% better than the industry standard – and a corrosion-resistant stainless-steel input/output (I/O) panel that lasts three times (3X) longer than ordinary panels. Asus has not disclosed the current retail pricing of the new Z170 Pro Gaming motherboard yet. But it is expected to become available in the following days to come. I’ll try to update this post as soon as the said motherboard will appear on popular online stores.

Aside from the full-sized ATX Pro Gaming, Asus will also be releasing a mini-ITX version of the said motherboard, called the Asus Z170i Pro Gaming. Asus hasn’t released this one yet, but looking at the picture below will give you an idea of what this motherboard is all about.