According to Jackie Hsu, Corporate Vice President and General Manager of Worldwide Sales, ASUS Open Platform Business Group.: “Since its founding in 1989, ASUS has prided itself on the outstanding quality of its motherboards. And today, 25 years later, our approach has seen us grow into the world’s best-selling and most award-winning motherboard brand. Taking into account the feedback and needs of today’s computing public, we’re proud to introduce our comprehensive 9 Series motherboard launch line-up across the ASUS-branded, ROG, TUF and WS Series motherboards. Whether for professional use, gaming, content creation, servers or simple, everyday computing, our motherboards cover every task,” Available in both ATX and mATX form factors, TUF Sabertooth Z97 Mark 1 and Gryphon Z97 Armor Edition motherboards feature TUF Fortifier, Thermal Armor, and Dust Defenders to ensure the ultimate in system durability and stability. The new onboard TUF ICe microchip delivers incredibly precise temperature monitoring and fan control whether adjusting settings manually or through the automatic one-click optimization feature found in Thermal Radar 2. TUF Fortifier uses a thermal pad attached to the motherboard, making the whole backplate a huge heat sink that directs heat away from key components such as VRMs and MOSFETs. Thermal management is aided by Thermal Armor which optimizes airflow to aid in heat dissipation, while Dust Diverter technology blows dust up and away from the heat sink VRM. 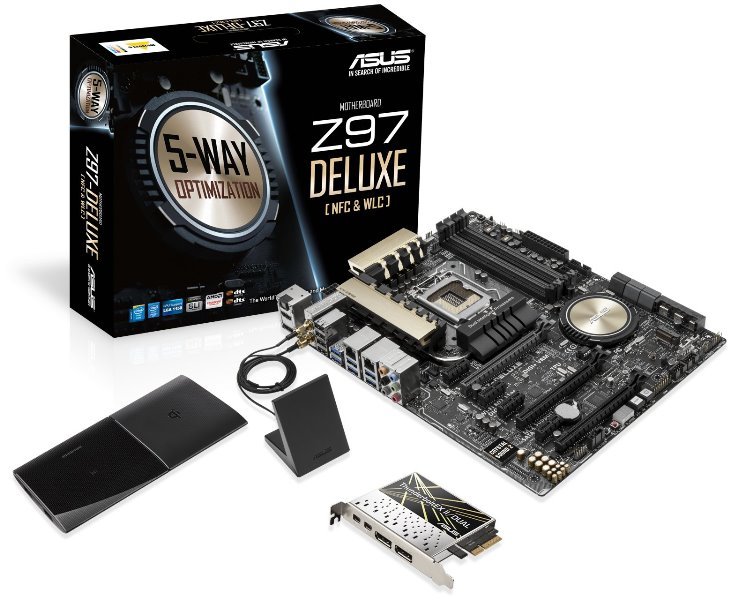 In PC home entertainment centers, ASUS HomeCloud turns the hard drive into a private cloud. The built-in Wake-on-WAN feature lets users wake and control the PC remotely with a smart device. Users can also stream multimedia content from the PC to any device. The capacity to interact with smart devices wirelessly is further enhanced by the inclusion of the ASUS-exclusive NFC Express 2 and wireless charger.

Critically-acclaimed reliability and performance
ASUS employs strict compatibility and validation standards, and ASUS 5X Protection ensures that the finest components are used for long-term reliability and durability; these include DIGI+ VRM, DRAM overcurrent protection, ESD Guards, high quality 5K-hr solid state capacitors and a corrosion-resistant stainless steel back I/O panel. Additionally, all motherboards are validated for compatibility with over 1000 devices, and undergo more than 7000 hours of rigorous endurance testing to assure quality and long-term reliability.

As of todate, Asus hasn’t disclosed the manufacturer’s suggested retail prices of their latest 9 series motherboards. But I previously posted an article where the prices of some of the Asus Z97 and H97 motherboards were revealed. You can check the article here: Asus Z97 and H97 Motherboard Prices Revealed – Starting at $109.99 Only. Meanwhile, it is expected that the new Asus Z97 and H97 series will hit shelves starting towards the end of May or sometime in June.

Let me know what you think about this new Asus Z97 and H97 lineup by sharing your thoughts in the comment section below.