Today we are going to take a look and review the Audeze Mobius Headphone. Audeze is known for their audiophile-grade planar magnetic headphones and earphones. The Audeze Mobius is the company’s first headphone or headset that is jam-packed with features that are quite uncommon on a typical gaming headset. According to the company, the Mobius is more than just a headphone, “it’s an experience”. The Mobius is basically like a gaming / multi-media / 3D surround / music listening headphone. Like I said, it has a lot of features and it’s also a Bluetooth headphone. In this review, we’re going to talk about what exactly the Mobius has to offer; what it is and what it is not. I can’t consider this as a reference headphone or something that audiophiles would pique their interest. But for a multi-media, gaming and simply music listening use, you might want to stick around and continue reading our Audeze Mobius headphone review below. 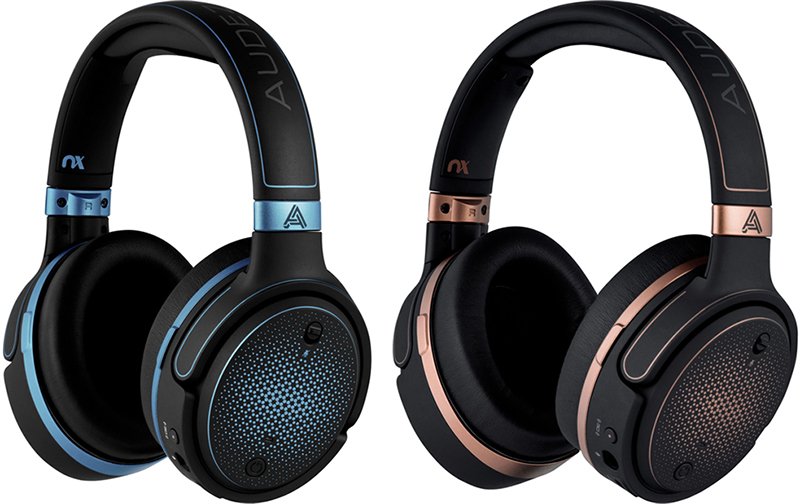 Unlike a dynamic driver with a cone or dome attached to a voice coil, a planar magnetic diaphragm has a printed circuit spread across the surface of a thin-film substrate. When the circuit is energized with an audio signal it interacts with the magnetic field and produces an electromagnetic force that moves the diaphragm back and forth creating sound.

The Mobius features full 3D emulation with support for different surround sound modes, including 7.1, 5.1, 5.0, 2.1 and 2.0. It also features integrated head tracking that tracks the tiniest movements of your head 1000 times a second. Together with the head tracking feature, Mobius integrates Waves Nx technology for real-time 3D processing in hardware. This basically allows the Mobius to identify and maintain the source of the sound and changes dynamically whenever the position of your head moves. This is one feature that you may like or hate it. I’ll discuss more about it later.

The Mobius can also be used as a wireless Bluetooth headphone, supporting AAC and LDAC codecs. Below is the specifications of the Mobius and after that I’ll discuss more of its features as we take a closer look on the headphone itself. The Mobius comes in a black box with its highlighted features listed on the front portion. You can see it highlights 3D audio, 7.1 surround sound, Waves Nx technology and other features. At the back, it shows you the cables included as well as the anatomy of the headphone itself. And yes, the Mobius is compatible with MAC and Windows PC. You can also connect your Android smartphone or iPhone via Bluetooth. Aside from the Mobius headphone, included in the box are the following: detachable microphone, USB-C to USB-C cable, USB-A to USB-C cable, analog 3.5 mm cable, quick start guide, user guide and warranty, and certificate of authenticity. I’ve got something to say about those cables though, I’m saving it for the later part.

Usually when we buy a product, we tend to ignore the user’s guide or the manual as we are familiar on how a headphone works or operate. But this time, you’ll need to pay attention and put that manual right beside the Mobius until such time you get familiar with the buttons and controls. The buttons on the Mobius has multi-functions and it can get pretty overwhelming or confusing at first. 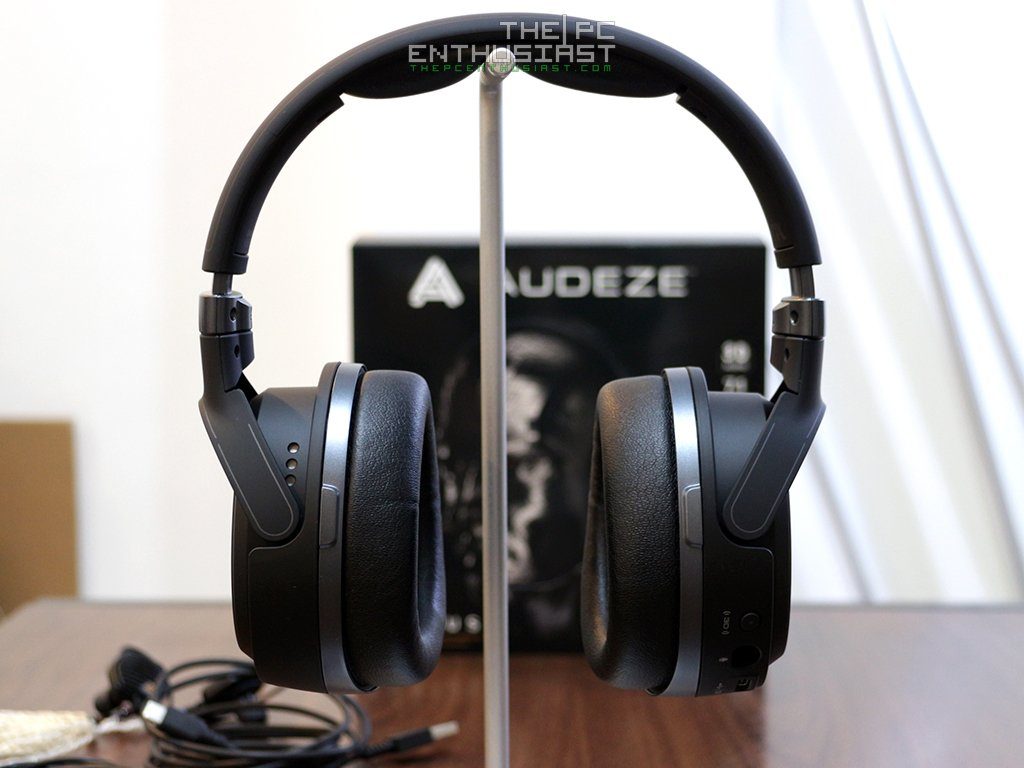 The Mobius that we have here is the Carbon version. The highlights are grey and they don’t stand out that much. If you don’t like it, there’s also the Copper and Blue variants that look more visually appealing. Most of the surface isn’t glossy but rather matte and smooth. There are no RGB lighting and majority of the components or frame is made of plastic. So it’s not as premium or doesn’t feel as premium compared to Audeze’s LCD series headphones. This is perhaps to minimize the cost of manufacturing the Mobius. It’s doesn’t feel like it’s built like a tank, but overall it still feels sturdy. 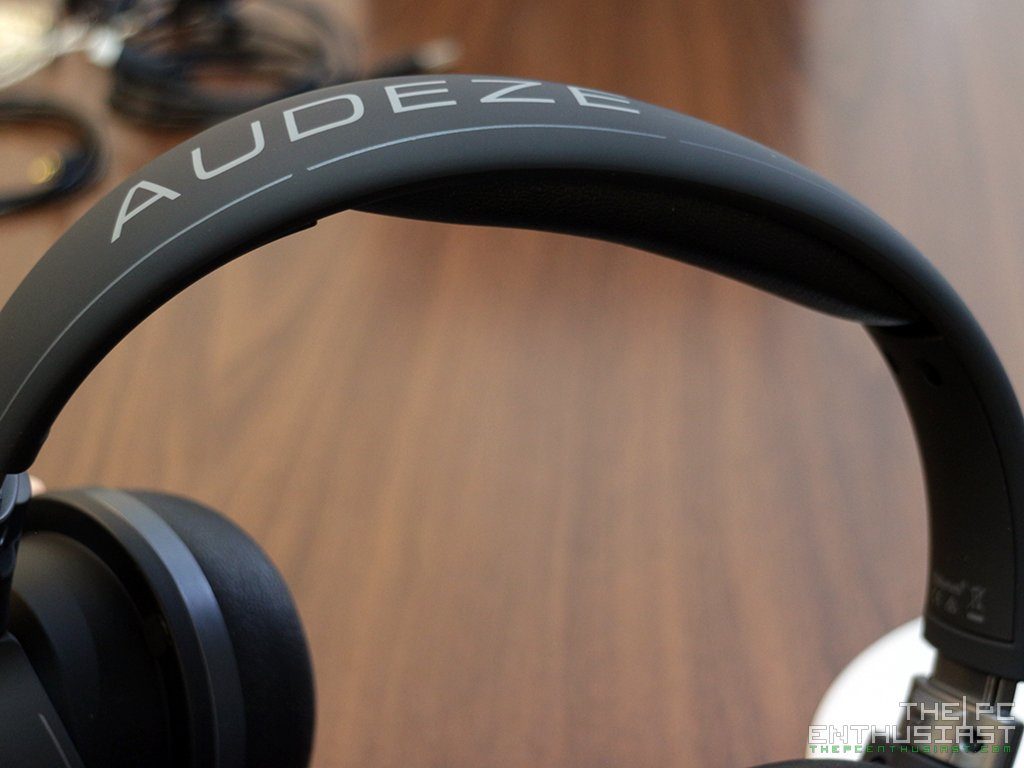 The headband is flexible, there is a bit of clamping force though. So depending on the size of your head, you might need to put something in between the ear cups (like books) to stretch the headband and let it seat until the clamping force is lessen. There is a foam on the middle top portion of the headband, but I am not a fan of this design. I can feel some pressure on the top of my head and it gets a little bit hot, especially when using it straight 30 minutes or more. I prefer a wider head rest support that would distribute the weight on my head evenly; similar to what they use on their LCD series headphone. This is just my personal preference, you may or may not like this kind of headband design. 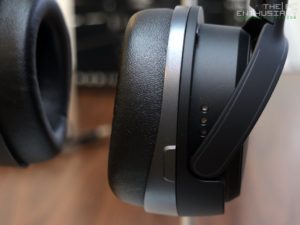 The headband can be adjusted, it “clicks” as you slide the headband up or down but there are no markings. The ear cups can be tilted and swiveled to get that perfect fit and seal. Audeze is using contoured memory foam ear pads for the ear cups, but it feels a little bit less dense. The ear pads are removable and replaceable though. Audeze is also selling the Gel-Filled ear pads for the Mobius. The “upgrade” pads are designed to dissipate heat build-up during long gaming sessions. I don’t have the gel-filled ear pads, but sounds like they are better than the stock ear pads. 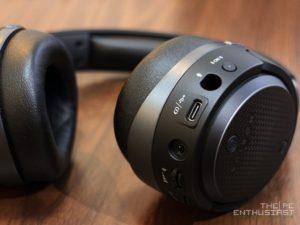 Now this is where you are going to need that manual I mentioned earlier. From the left hand photo you can see the power button that also act as a pairing button for Bluetooth. On the top portion is a mic on/off switch. There’s a small LED indicator just above the MOBIUS logo.

On the center photo, you can see the 3D button, it also cycles the 3D mode. Then there’s the slot for the removable microphone, and you have the USB Type-C port for charging and audio connection. After than is the 3.5mm audio port.

Finally, the volume wheel that can also be pressed or click. The volume wheel not only controls the volume but it can also – disable or enable charging (long press); double click to link back to the last connected Bluetooth device; and click then spin up or down to skip to the next or previous track, on platforms that support this action.

The “click and spin” action is actually a bit annoying. Sometimes it would register, but most of the time it doesn’t. It would be much faster to launch the Audeze HQ app and switch sound profiles from there. However, you will need to connect the Mobius via USB.

Audeze Mobius 3D Gaming Headset latest pricing and availability:
For US: available on Amazon.com here
For UK: available on Amazon UK here
Pages: 1 2 3
Amazon and Newegg links in the post are affiliate links. As an affiliate, we may earn from qualifying purchases.
Share this: 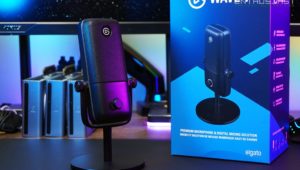