Micro ATX is a popular form factor and today let’s take a look and review one of BitFenix’s popular cases – the BitFenix Prodigy M. The Prodigy M is the successor of also the popular BitFenix Prodigy. The original Prodigy, despite having an attractive design, can only accommodate mini-ITX motherboards. Thus the company released the Prodigy M that can accommodate both Micro ATX and Mini-ITX motherboards. The said case can also accommodate 2-way SLI or CrossFireX multi-GPU configuration. Are you planning to build an HTPC or compact gaming PC? Check out the rest of its features, specifications, as well as its price and availability in my BitFenix Prodigy M review below. The BitFenix Prodigy M is a micro ATX or MATX case that is fully compatible with micro ATX motherboards and mini ITX as well. Just like its predecessor, the Prodigy, it features the same outer design and looks, but it comes with a totally new layout inside to support mATX motherboards.

It has 5 expansion slots making it fully compatible with 2-way SLI or CrossFireX multiple graphics card configuration. Another interesting twist about this case is the orientation of its motherboard tray. Despite its compact size, users can install several HDD or SSD inside the case and can support some water cooling as well.

I’ll discuss more of its features as we take a closer look at the Prodigy M below. 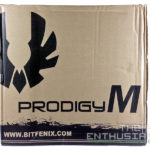 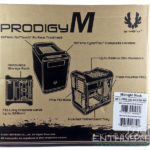 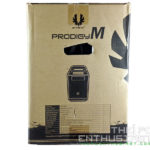 The photos above show the retail box which houses the BitFenix Prodigy M. It has thick foams and a plastic covering that protects the case while it is in transit. You can also see its features and specifications on the rear and right sides of the box. 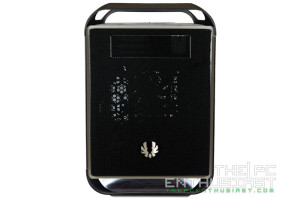 The BitFenix Prodigy M black version features a full front mesh panel where fresh air comes in specially for the power supply. Due note however that the white version of the Prodigy M doesn’t come with a front mesh panel; instead you get a plain white panel that doesn’t have any holes except on its sides. There’s a 5.25″ external drive bay just in case you want to install an optical disk drive or a fan controller. 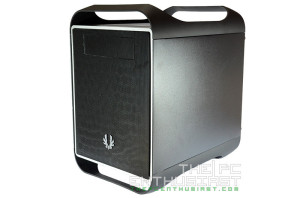 Just like the original Prodigy, the Prodigy M features that Mac Pro looking carrying handles called FyberFlex™ Composite handles. These handles are flexible but will not break easily even if you have installed your components inside the case. But personally I think BitFenix should make these handles not flexible instead. I’ll feel much secure carrying this case with my components inside if the carrying handles would not flex at all. Meanwhile, those handles have a SofTouch™ surface treatment, giving it a nice rubberized-like feel when you touch it. 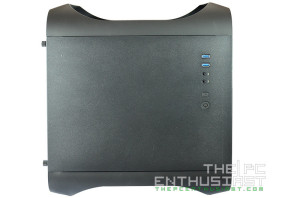 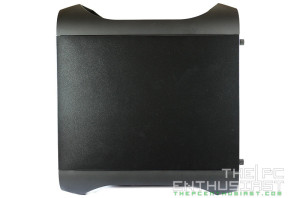 The front I/O panel of the BitFenix Prodigy M is located on one of its side panel. But wait, something is wrong with the photos above. Notice that the reset button (letter R) is inverted? That’s because this panel should be on the other side and not on the left side. I’m not sure why it was primarily placed there, perhaps this is just an isolated case. But this basically gives us an idea that the side panels are interchangeable.

There’s a removable mesh ventilation on the top of the BitFenix Prodigy M. You can install up to two 120mm fan or 240mm radiator on the top portion. But should you decide to use this, you will not be able to do an SLI or CrossFireX since the fans or radiator will consume the space intended for the second graphics card. Below the Prodigy M, is a huge air ventilation protected by a removable heat shield. The heat shield actually prevents the heat coming from the exhaust of the power supply to go back in. This heat shield is magnetized so you don’t need to screw or unscrew it. You can also install up to 230mm fan at the bottom portion or up to 2x HDD or SSD drives.

I noticed that BitFenix is using thumbscrews that are partly plastic and has pointed tips. I would appreciate it more if BitFenix would use an all metal thumbscrews (the one on the left hand side of the photo above) or something like anodized thumbscrews instead. This way, it would look better aesthetically. Moving on, the side panels of the BitFenix Prodigy M are very sturdy and doesn’t easily flex at all. In the right side panel is where the front I/O ports are located. You get a power button, a reset button, two USB 3.0 ports as well as mic in and audio out ports. You can also install up to two SSD on this side.

There’s a huge hole on the motherboard tray for easily installation of third party CPU coolers. In front of the case you see there are mounting holes for fans but you can’t actually use this area because this is occupied by your power supply. On the right portion, you see a small tray where you can install up to 3x SSD or 2x 3.5″ hard drives. This tray is also removable in case you don’t plan to install any drives and to free some space. Building a gaming machine with the BitFenix Prodigy M was not that difficult, but it was not that easy as well. You need to carefully select the components that you will install inside the case, because even though it does support dual graphics card configuration and water cooling, you might find it difficult to fit everything specially if you plan to do some cable management. At first, I was thinking of using a Corsair Hydro H105 AIO water cooler or an Enermax Liqtech 240 to cool the CPU, together with an Asus R9 290, Maximus VII Gene and a Corsair HX650 power supply. But the first problem that I encountered was that the HX650 was long and I could no longer install the H105 together with an Asus R9 290. So I decided to use Cooler Master’s V550 instead since it was shorter. I also decided not to use an AIO liquid cooling since its tubes still gets in the way of the graphics card. Perhaps a 120mm/140mm radiator would be the best solution for AIO water cooler, but unfortunately I don’t have one. Instead of using the H105, I settled for an air cooler instead, the Cryorig R1 Ultimate. Installing a CPU backplate was easy thanks to the huge hole on the motherboard tray. I also decided to remove the HDD/SSD tray on the right side to make more room. I was able to install two WD hard drives at the bottom portion without any problems. But be sure to install them first before you install a CPU cooler because it will be very difficult (if not impossible) to connect their SATA and power cables if you installed the CPU cooler first. Like I said, if you don’t want a hard time trying to fit in all your components, sacrifices must be made and you must carefully choose the hardware you want to install first. Doing a proper cable management was also not that easy since I noticed that it lacks holes where you can strap the cables specially on the sides and corners. If you want your build to look neat and clean, I recommend that you use at least a semi modular power supply or better yet a full modular power supply and customize the length of the power cables.

However if you were able to plan carefully the components that you will be using, it will not be difficult to put them in together, and you will find your build rewarding after you have installed everything.

The BitFenix Prodigy M is now widely available and comes with a current retail price of $99.99 for the White variant, and $122.99 for the Black variant. In other countries it’s around £70 or Php 3,500 more or less. Actual price may vary depending on the retailer, and the color of the case.

I consider a PC case as a matter of personal preference. There is no one size fits all solution since each people has different taste and different needs. However the BitFenix Prodigy M does come with an attractive looking outer design. It has the style and it can be carried around easily thanks to its FyberFlex Composite handles. There are several things that I like and dislike about the case.

First of all, I like its nice look and the smooth finish on the handles. But I would prefer those handles to be sturdy and solid, instead of being flexible. It’s great that there are 5 expansion slots so that so can install two graphics card, plus you also have an extra slot in case you plan to install additional components like a sound card. It supports large CPU air cooler like the Cryorig R1 Ultimate or Noctua’s NH-D14 or NH D-15. There are anti-vibration rubbers that come with the package for the hard drives. And I like the fact that you have several options to choose from since this is a full pledge micro ATX case.

But what I don’t like about the case is that it is somewhat difficult to install PC components and do a proper cable management specially if you haven’t plan ahead. Like I said during my build, I originally plan to install an HX650, and AIO water cooler together with the Asus R9 290 DirectCU II OC and Maximus VII Gene. But it was just impossible to fit them together, or if I did insist on those components I’m sure I’ll be putting unnecessary strain on the cables and the tubes of the water cooling, which could damage the components. I’m sure this is not the case with the original Prodigy since you will have more room to work with and better compatibility with components since it’s only a mini ITX case.

I’m not particularly concerned with the stock fans since I don’t use stock fans anyway, but I would prefer that the motherboard orientation was not inverted and the front I/O panel was not located in the side panel. And also those thumbscrews, please use an all metal or thumbscrews since it looks better.

Generally the Prodigy M is one solid and quality micro ATX case. The chassis itself, including the side panels are very solid. And with careful plan the benefits will outweigh the issues you might encounter when building with this case. Considering the price and quality that you get, the BitFenix Prodigy M deserves The PC Enthusiast’s Highly Recommended Award.