Most of us probably already knew that Corsair will be releasing a wave of new PC chassis in different sizes. Corsair first revealed their next generation chassis during Computex 2014, and one of them is the Corsair Graphite 380T, a mini ITX chassis designed for users who carry around their CPU often. Recently pictures of the Graphics 380T Hornet version, the Yellow one, was revealed by Expreview. It looks like the images are the official press images, but I think the new 380T looks very sleek. Check out the Graphite 380T Hornet photos below and some of its features and specifications below. Did Bumblebee just transformed into a mini ITX case?! Nah… This is just the Yellow version of Corsair’s Graphite 380T or the Hornet Edition. The 380T also comes in White and Black colors, giving consumers more options to choose from. I’m just wondering why they not included a red version, since the Red and Black color theme is very popular nowadays.

Anyway, the Corsair Graphite 380T was designed in cooperation with BMW, that’s why the new series comes with a Start button similar to what you see in a BMW car. Aesthetically speaking this tiny case does impress and it looks sleek and very unique. It features a carrying handle making it easy to carry around, very useful specially during LAN parties. There’s also a three-speed fan controller so that you can control the fans installed. The Graphite 380T can accommodate up to 5 fans (depending on the size), and it can also accommodate up to 4x 3.5-inch or 2.5-inch hard drives or SSDs. The top front portion where the I/O panel is features the BWM start button (power) and reset buttons, USB 3.0ports, mic and audio out ports, and the 3 speed fan control. The whole case itself measures 393mm x 292mm x 356mm and is made out of steel and plastic. At the front air ventilation of the Corsair Graphite 380T, you can install either 1x 200mm fan, or 1x 140mm fan or 2x 120mm fans for air intake. You can install 1x 120mm fan on the rear portion for exhaust. And you can also install 2x 120mm at the side portion for additional cooling. Usually this area will be used to cool the CPU, and you can also install a 240mm radiator on the side. Looking at the inside of the Corsair Graphite 380T, it looks like there is not much room to work with and the components you can install is limited. However it can support graphics card up to 290mm, or you can install a full size GTX 780 Ti or R9 290X inside this case. There are only two PCI slots so, GPU that consumes triple slots are not compatible. 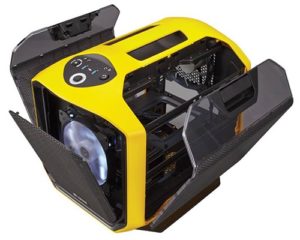 There’s not much to say further about this case, and I do hope I would be able to review one once it becomes available.

The manufacturer’s suggested retail price for the Corsair Graphite 380T mini ITX case is expected to be around $129.99, and it is also expected to become available by August 2014. I’ll try to post an update once this case becomes available to order online. 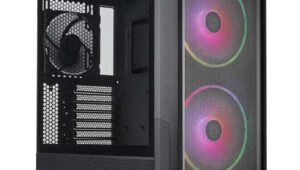