There are several improvements present on the newer Vengeance RGB PRO SL DDR4 memory kits. For starters, Corsair has adjusted its height to only 44mm tall. It offers better compatibility and clearance, especially with a tower-type CPU air cooler. There is also a ten RGB lighting zone that is fully customizable using the Corsair iCUE software.

As for the internals, it is similar to the Vengeance RGB PRO DDR4 series. It’s still the same high-performance and reliable memory, with each memory chip carefully screened and selected for high performance and overclocking potential.

When it comes to platform compatibility, the Vengeance RGB PRO SL is optimized for Intel and AMD motherboards. It is also available from 16GB up to 128GB memory kits, with speeds of up to 3600MHz. Finally, it is available in both black and white color themes. Now let’s take a closer look at the memory itself.

The kit that we have here is a DDR4-3200MHz CL16 with a 32GB capacity, four sticks of 8GB memory. Corsair adopted a new style for its packaging, generally with the triangle pattern. You can also see this kind of pattern on Corsair’s chassis and other products.

Inside are four sticks of DDR4 memory, 8GB each. The dual memory kit is similar, but the retail box is slimmer since it only houses two sticks inside.

The Vengeance RGB PRO SL (still) features an aluminum heat spreader and the internal chips and design of the custom PCB are similar to the older RGB PRO kits. And yes, it feels solid and premium on hand.

I’m not sure how many RGB LEDs the older Vengeance RGB PRO DDR4 has, I think 5 if I am not mistaken. But the PRO SL has 10 RGB LEDs, making it brighter and offering more room for customization. But still not as saturated looking as the Capellix RGB LEDs.

Speaking of customization, you’ll need to install Corsair’s iCUE software so that you can fully customize the RGB lighting. I think software from the motherboard manufacturers will also work and may give you a certain amount of control. But you’ll have better control and customization with the iCUE software.

Aside from RGB lighting customization, users can check the status of the Vengeance RGB PRO SL as well. The iCUE software can provide the memory kit’s real-time temperature and can display it in graph form as well.

In testing the Corsair Vengeance RGB PRO SL DDR4 memory, I’m using a Z590 motherboard powered by an Intel Core i5-11400F. Below are the rest of the specifications of the system: 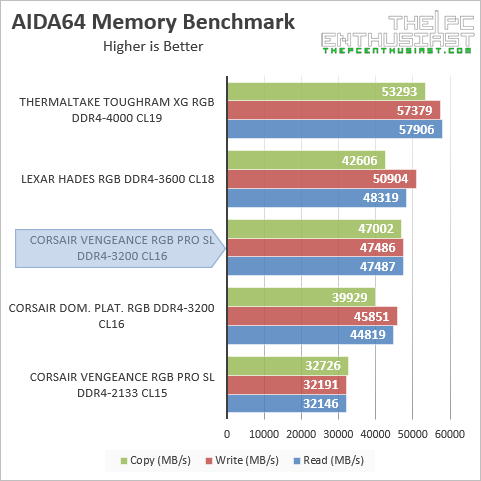 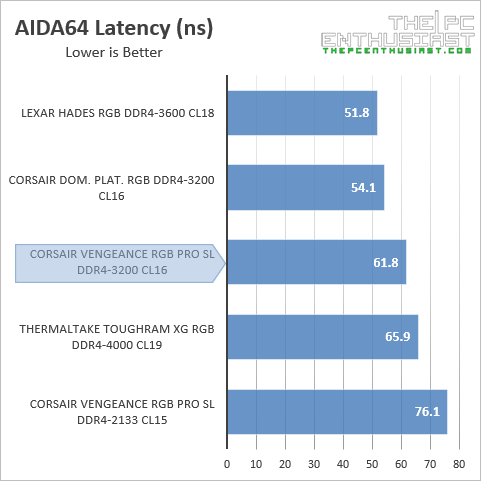 Well, my Vengeance RGB PRO SL DDR4-3200MHz CL16 memory kit did perform as expected. Its performance is quite stable and consistent. Surprisingly, it outperformed my Dominator Platinum by a little bit in the AIDA64 memory benchmark. 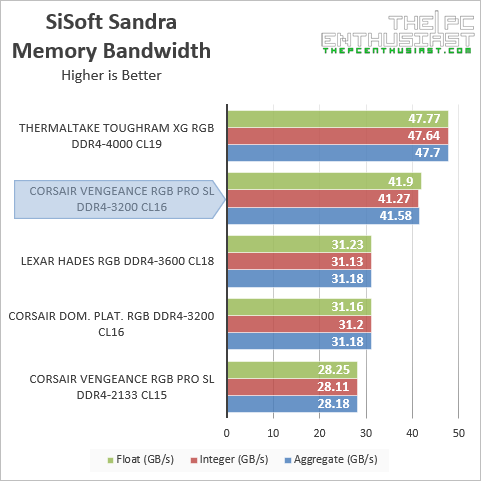 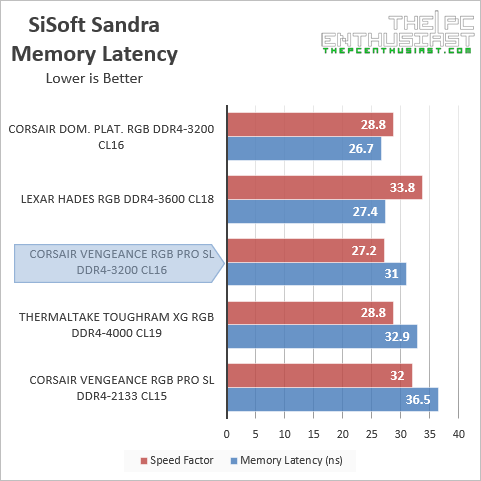 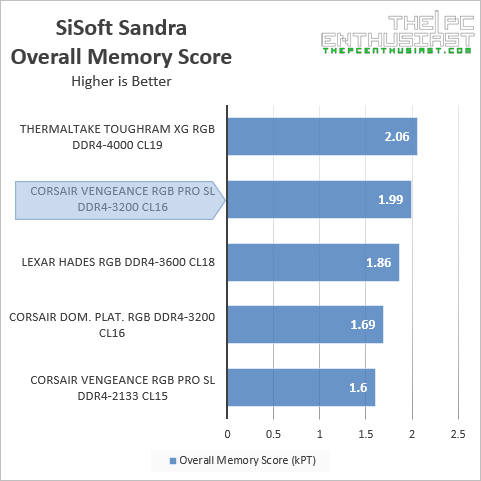 We can see a similar scenario using SiSoft Sandra’s memory benchmark suite. Although, surprisingly, the Vengeance RGB PRO SL outperformed Lexar’s DDR4-3600 CL18 memory in the memory bandwidth test. And it outperformed it again on the overall memory score, including my Dominator Platinum with the same speed.

I’m not sure how it outperformed the Dominator Platinum, perhaps my kit was older or perhaps the memory chips weren’t performing well compared to the newer Vengeance RGB PRO SL. Either way, I would say that the performance of this memory kit is good overall in general.

The Corsair Vengeance RGB PRO SL DDR4 memory kit is now available in both black and white color. It is also backed by a limited lifetime warranty, alongside Corsair’s worldwide customer service and technical support network. The memory kit that I have here, DDR4-3200MHz CL16 32GB (4x8GB) came with a manufacturer’s suggested retail price of $169.99 USD. Memory prices do change from time to time. So, for the latest pricing and availability, kindly follow the links below.

Just like the original Corsair Vengeance RGB PRO, the newer Vengeance RGB PRO SL is a good solid performing DDR4 memory kit overall. It’s nice to see that its height was adjusted and lowered and there are now 10 RGB lighting zones. The design and aesthetic look and feel premium and I think it would look nice on a system full of RGB lighting.

There are a couple of things that one may need to consider before deciding to get this memory stick. These Vengeance RGB PRO SL aren’t really “overclocking” memory kits. If you want to experiment with overclocking, you’ll have better results with the Dominator Platinum kits. Also, at this time, the highest memory speed available is only up to 3600MHz CL18. I hope there would be more options in the future. But to be honest, a 3200MHz or 3600MHz memory kit is sufficient for gaming and day-to-day use.

Other than that, there’s nothing to dislike about the Vengeance RGB PRO SL. Oh, it would be nice if they used Capellix RGB LEDs instead of regular RGB LEDs. I think it would look much better since the colors will be more saturated and vibrant.

At the end of the day, if you like some RGB lighting on your system and you like its design. I don’t think the Corsair Vengeance RGB PRO SL DDR4 would disappoint you, especially with its competitive pricing and great quality.