EVGA recently announced a new feature incorporated in their mainstream and high-end graphics card, the EVGA Double BIOS. Just as its name suggest, it’s simply a graphics card that has a dual BIOS, or double BIOS built in them. Most of the time, we encounter double BIOS chips in motherboards. Just like in motherboards, they have similar purpose. The secondary BIOS in some EVGA graphics card allows you to experiment and tweak the GPU without the risk of damaging the graphics card. Tweaking, specially overclocking can be dangerous. If you don’t know what you are doing, you might end up damaging your graphics card. The secondary BIOS allows easy BIOS recovery just in case things didn’t go well. And there are even some (just a few) EVGA graphics cards that have three BIOS built on them! Check out how to use the EVGA Double BIOS feature and what graphics cards have this feature below. 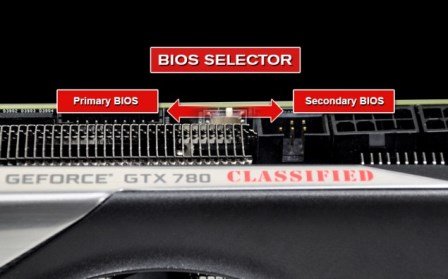 How to Use EVGA Double BIOS

Using the EVGA Double BIOS feature is very easy. Just like in motherboards with dual BIOS, simply turn off your computer/system completely. It’s also advisable to disconnect your unit from the power source. Make sure you know where the BIOS selector is located in the graphics card, then simply flip the switch to the second BIOS (or third). Turn on your computer and you are now using the second BIOS (or third) of your EVGA graphics card. If you want to go back to the previous BIOS settings, just do the same steps above.

WARNING: Do not flip the BIOS switch while your computer is turned on. It may/will damage your graphics card!

I’m guessing that sooner or later other graphics card manufacturers will also adapt a double BIOS feature in their GPUs. But do you really need one? Who is it for? For an average gamer who like to just plug their graphics card and play without additional tweaking, you might find this feature useless or even ignored. I for one don’t tweak my graphics card at all. I just use the card as it is or just use the factory OC settings or use the OC profile built on them.

But for newbie or amateur PC enthusiasts who likes to tweak, experiment and is still learning, this would definitely be a great feature for them. Like what I said, tweaking and overclocking is dangerous, and if you do not know what you are doing, it may damage your graphics card – permanently, and most of the time warranty doesn’t cover this. The EVGA double BIOS would act as their second or third life.

The EVGA Double BIOS is quite different from Gigabyte’s Dual BIOS system. In Gigabyte, the secondary BIOS acts as a back up BIOS just in case the primary BIOS dies or gets damage. When that happens, it will automatically switch to the secondary BIOS that acts as a spare BIOS.

Meanwhile in EVGA Double BIOS, you can switch from one BIOS to another. Tweaking and customizing the BIOS settings is encouraged in the secondary (or third) BIOS as well. It’s not just a backup BIOS, but a second (or third) different BIOS that you can use.

Well, if you think you need this kind of feature, check out the list of EVGA graphics card below that has double BIOS.