If you are planning to build a small gaming machine powered by the latest 10th Gen Intel Core processor; here are five Z490 mini ITX motherboards you can choose from. These mini ITX Z490 motherboards are built with Wi-Fi 6 wireless connectivity (except for one); can support DDR4 memory speeds up to 5000MHz (OC); some are built with a good VRM and power phase design with active cooling solution; supports high speed USB 3.2 Gen2 and some even Thunderbolt 3. If you are in the market for such a small motherboard, check them out below. Currently, there are five Z490 mini-ITX motherboards that are available in the market. These are based on the latest Intel Z490 Series chipset; and yes, they are capable of overclocking an unlocked 10th Gen Intel Core processor. Although, I don’t think these mini-ITX motherboards can really push the CPU with a (very) high clock speeds. But I expect that they would be able to do at least some mild or decent overclocking, both CPU and memory.

Also, the motherboards below are listed in alphabetical order. Despite being limited in size and capabilities, they do have their own unique features; aside from the common features found on most Z490 motherboards. Below is a brief specifications table of the five Z490 mini-ITX motherboards, after that let’s discuss some of their (unique) features. ASRock released two Z490 mini ITX motherboards, and the Phantom Gaming-ITX/TB3 is the more feature-rich and higher end Z490 ITX motherboard between the two. Judging the by looks and the name of the motherboard alone, one can tell that it’s a premium motherboard geared towards enthusiasts and gamers.

It features a 9 power phase design with 90A power chokes. There are two active fans that cools the heatsink of the MOSFETs to handle Intel’s 10th Gen 10 Core CPU. ASRock is also incorporating their Base Frequency Boost technology in this motherboard; proving base frequency boost on non-K series CPUs. Although, I wouldn’t count on this feature much; as there is a possibility that Intel might patch and close this “feature”. This is, after all, out of Intel’s specs.

There are RGB lighting at the bottom part of the motherboard, but I find the positioning of the other two SATA connectors a bit odd. It’s located right above the PCIe x16 slot; on the same daughterboard where the two M.2 slots are located.

The ASRock Z490 Phantom Gaming-ITX/TB3 is available on Amazon.com here and Newegg.com here Among the five mini-ITX Z490 motherboard listed here, the ASRock Z490M-ITX/ac is the cheapest. But it’s also the motherboard with lesser features compared to the other four. It also doesn’t have that gaming-vibe to it; it’s just a plain and simple mini-ITX motherboard. This is more of a value-oriented motherboard, rather than a flagship or high-end product.

ASRock has to cut some corners in order to bring it at a more affordable price. It features an 8 power phase design with 60A power chokes. It’s lower compared to the Phantom Gaming-ITX, but it does also feature the Base Frequency Boost technology as well (for now at least). Another area where the feature is less stellar is its connectivity options. The ASRock Z490-ITX doesn’t have Thunderbolt 3 connection, and it doesn’t seem to feature the newer and faster WiFi 6 802.11ax. Bluetooth is also only version 4.3/3.0.

The number of USB and audio ports on the rear I/O panel is also fewer; but surprisingly, it has two Ethernet LAN ports. I think this motherboard with be okay to pair with something like a Core i5-10600K or i7-10700K. It may be able to handle the i9-10900K, though I wouldn’t expect much when it comes to its overclocking capabilities. Anyway, if you want a mini-ITX on the cheap side, this is a good option. But if you are planning to get a non-K CPU, better wait for the H470/B460 motherboards to be released.

The ASRock Z490M-ITX/ac is available on Amazon.com here and Newegg.com here Like its predecessor, the Asus ROG Strix Z490-I Gaming is probably going to be the more popular mini-ITX motherboard here. It has a really attractive set of features, not to mention it looks aesthetically pleasing as well. The RGB lighting is very minimal; you can only see RGB lighting on the ROG logo on top of the M.2 heat sink shield area.

It doesn’t have Thunderbolt 3 support, but it sports the latest Wi-Fi 6 connectivity and the faster USB 3.2 Gen2 connection. Its audio section is also beefed up with SupremeFX S1220A codec. Like the other higher-end Z490 mini-ITX motherboards, this one also has an active cooling fan located on VRM section near the rear I/O ports. Asus is using a custom Delta Superflo; a custom-made low noise fan that is said to cool the VRM area by up to 12° Celsius. The Asus ROG Strix Z490I-Gaming also comes with all the bells and whistles Asus usually bundle with their ROG motherboards. This includes 5-way optimization feature, Sonic Studio III, Armoury Crate, and RAMCache III. Almost forgot, but this motherboard features an 8+2 power stages that combines the high-side and low-side MOSFETs and drivers into a single package. This basically has two more power stages compared to the other ITX motherboards. Another Z490 mini-ITX motherboard that I think will be popular is the Gigabyte Z490I Aorus Ultra. Based on specs sheet, it has a direct 8 phase digital power design with 90A smart power stage. Gigabyte is also using a 10-layer PCB; twice the copper in the PCB; and looks like Gigabyte has implemented a robust power delivery system with digital PWM, driver MOSFET, Tantalum capacitor and CPU power connector.

This Z490 mini-ITX motherboard is said to be capable of supporting up to 5000MHz (OC) DDR4 memory speed. That’s really fast, although I haven’t seen someone overclocking their memory to 5000MHz using this motherboard yet. There is no active fan cooling solution, but Gigabyte is using a large multi-layered heatsink with two 2 heat pipes. There’s also RGB lighting on the right-hand side of the motherboard.

The Gigabyte Z490I Aorus Ultra doesn’t have Thunderbolt 3 support, but it’s built with the latest Wi-Fi 6 AX201 with Bluetooth 5.1 and USB 3.2 Gen2 connectors. If you want a bit of future proofing and some RBG lighting, you might want to consider this one.

The Gigabyte Z490I Aorus Ultra is available on Amazon.com here and Newegg.com here 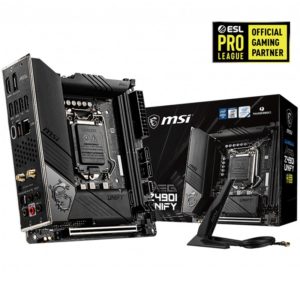 Last, but definitely not the least, is the MSI MEG Z490I Unify Gaming mini-ITX motherboard. Looking at its specs, it’s very similar to the Gigabyte Z490I Aorus Ultra. It has 8 phase power design with 90A smart power stage; a 10 layer PCB; up to DDR4-5000MHz (OC) memory support; similar wired and wireless connectivity options as well. They are almost identical specs-wise , but the MSI MEG Z490I Unify has a number of advantages over Gigabyte’s mini-ITX motherboard.

The MEG Z490I Unify features an active fan cooling solution, aside from the large heatsinks and heat pipe. It features Thunderbolt 3 connection with up to 40Gbps of speed via the USB Type-C connector. It also boasts an Intersil Digital PWM with ISL69269; making it fully capable of handling high-end CPUs like the Core i9-10900K. And when it comes to audio, it has a 7.1 channel HD audio with S/PDIF output at the back.

Aesthetically speaking, the MSI MEG Z490I Unify features an all-black clean looking design. There are no RGB lighting, just a simple dragon logo near the rear I/O ports. The only thing that I don’t like in this motherboard is that two of the SATA connectors are located on the left side of the DIMM slots; sandwiched between the M.2 shield, PCIe x16 and DIMM slots.

Also, one thing that is not clear to me is whether this motherboard is PCIe 4.0 ready or not. In its marketing page, there is no emphasize or highlight that it will support the next gen PCIe 4.0. However, at the bottom, there is a single line saying “Ready 4 the Future: Support Lightning Gen 4 Solution for the future”. Not really sure about that; but if you want a clean-looking all-black ITX motherboard loaded with features, this could be your best option.

There you have it! These are currently the Z490 mini-ITX motherboards available and released. I’m not sure if more models will come out in the (near) future. But if ever manufacturers will release more ITX motherboards, perhaps it will be based on the H470 chipset instead.