Gigabyte has recently announced four high performance motherboard under their X99 Champion Series – the Gigabyte X99-SOC Champion, Gigabyte X99-Gaming 5P, Gigabyte X99-UD4P and Gigabyte X99-UD3P. These X99 Champion motherboards supports the latest Intel Core i7 Processor Extreme Editions and DDR4 up to 3200MHz speed with Intel XMP. They also feature Genuine All Digital Power Design with IR Digital PWM and IR PowIRstage ICs, and 4-way graphics with premium PCEIe lane. Check out the rest of their features from the official release below.

DDR4 memory modules are available at a stock frequency of 2133 MHz, but memory vendors encode XMP profiles which can automatically modify the frequency and timings of the supported memory modules to work in par with your CPU. With the X99 Champion Series, GIGABYTE is offering a tested and proven platform that ensures proper compatibility with profiles up to 3200 MHz, and exclusively 3400 MHz for the X99-SOC Champion.

Paired with DDR4 memory such as the Corsair Limited Edition Orange Dominator Platinum kit, which was custom designed for the GIGABYTE X99-SOC Champion motherboard, users can take advantage of better responsiveness during gaming and faster operation execution in memory demanding works applications.

6x (30μ) Gold Plating
GIGABYTE X99 Champion series motherboards come equipped with a 30 micron thick gold plating, 4 PCIe slots and over the DIMM slots, which means that enthusiasts can enjoy better connectivity, absolute reliability and longevity for the diverse connectors overtime, without having any concerns about corroded pins and bad contacts.

Realtek ALC 1150 115dB SNR HD Audio with Built-In Reat Audio Amplifier
Featured across the other Champion motherboards is the Realtek ALC1150, a high-performance multi-channel High Definition Audio Codec that delivers an exceptional audio listening experience with up to 115dB SNR, ensuring users get the best possible audio quality from their PC. 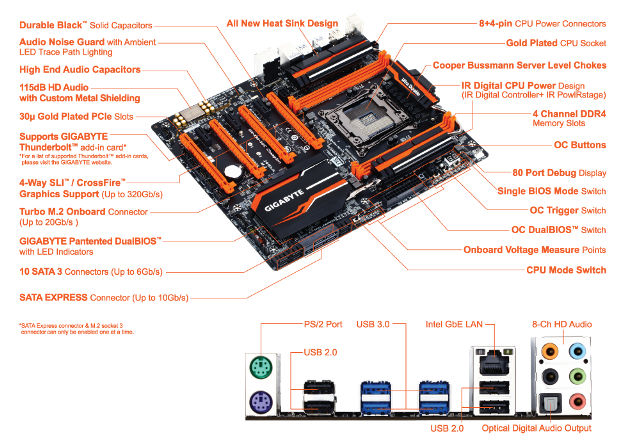