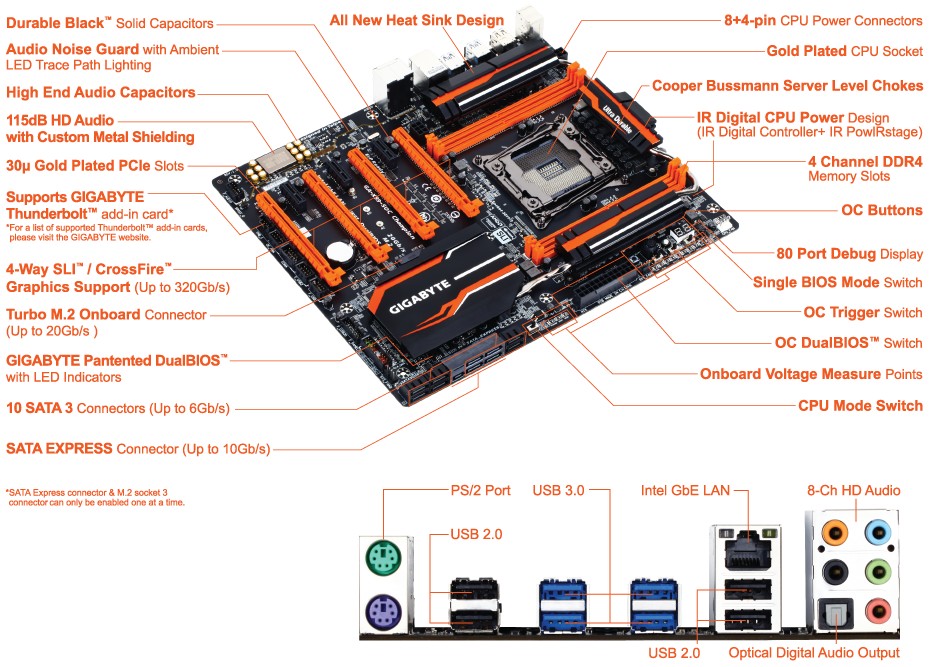 New GIGABYTE X99-SOC Champion Motherboard for World Record Seekers
Featuring the latest Intel® X99 Chipset, support for Intel’s Core™ i7 Extreme Edition (LGA 2011-v3 socket) processors and latest DDR4 memory support, the X99-SOC Champion is built to reach extremes. One of the many unique features that make this motherboard a true Champion is the DIMM design engineered for the most extreme memory overclocking.

SMT mounted for improved signal quality and located closer to the CPU socket, the DIMM’s shorter trace path enables the DDR4 memory to communicate faster with the CPU, enabling the overclocker to reach never achieved before DDR4 memory frequencies. The X99-SOC Champion offers maximum data transfer speeds for storage devices with a Turbo M.2 port for 20 Gb/s of transfer speed on M.2 devices, and a SATA Express connector bringing 10Gb/s transfer rates needed for faster NAND flash technologies in cutting edge SSDs. Additionally, the GIGABYTE X99-SOC Champion, features a unique PCI Express design that utilizes 100% of all 40 lanes from the CPU when in a 4-Way or 3-Way graphics configuration for the ultimate in graphics performance.

Full specifications of the motherboard can be viewed here: http://www.gigabyte.com/products/product-page.aspx?pid=5280#ov

Here’s PCPer doing an interview with Gigabyte’s representative regarding the X99-SOC Champion: