The HiFiMAN HM-700 comes in a decent box, it doesn’t feel too premium and flashy, but very presentable on its own. Opening the upper lid reveals the HM-700 and the RE-400B in-ear phones. The rest of the accessories are hidden on a compartment under the RE-400B. The package includes an owner’s guide and some leaflets. The package also includes a USB cable for charging and data transfer, a balanced to unbalanced 3.5mm adapter so that you can use the RE-400B on other devices, another connector if you plan to use other headphones, a number of silicone tips in difference sizes, a wire clip, filters for the RE-400B, a cleaning cloth for the HM-700’s display and a carrying pouch. Above you see the HiFiMAN HM-700 together with the RE-400B in-ear phones. I think the screen protector was already installed out of the box. Not sure about that, nevertheless, it’s good that the HM-700 has a screen protector. Looking at the HM-700, it’s really a simple portable audio player. It’s lightweight and the casing is made out of plastic. I didn’t expect much from an entry level portable player. However, being a HiFiMAN product, I would expect more when it comes to sound quality. We will get into that in the later part of this review. You can see the micro USB data and power port on the lower right-hand side portion of the HM-700. On the opposite side is the 3.5mm balanced output port. The directional buttons are not touch sensitive. They are just conventional buttons like the three orange buttons on the middle. The included manual has a diagram showing the buttons’ respective functions.

The HM-700 doesn’t have any other output port. Pairing it with another portable DAC/AMP isn’t really a good idea (I tried and it didn’t sound well). It’s primarily intended to be used as it is together with the RE-400B. You won’t find any microSD slot either, so better get the 32GB model if you plan to install hundreds of lossless files. Here’s a close up look on the RE-400B in-ear phones. The cable of the RE-400B isn’t the best cable out there. It’s somewhat glossy and easily leaves kink or bend marks. The housing of the speakers are also very lightweight, almost unnoticeable when worn (at least that’s how I feel). The good thing is, aside from being lightweight, the housing is made out of an aluminum shell and not plastic. By the way, the silicon tips you see above are not from its accessories.

Here we have a closer look on the RE-400B’s housing. There’s a black thin filter right on its sound outlet. If ever the filters get damaged or you need to replace them for some reason, the package includes 5 extra pairs. The RE-400B has a different kind of 3.5mm plug. It’s a TRRS balanced mini plug, and you need to use the balanced to unbalanced adapter included in the package if you plan to use the RE-400B with another audio device. Not all audio devices support a TRRS connection. One last thing before we proceed to the next part. You also get a pouch which you can strap on your upper arm. It’s very much handy specially when you go walking or running. 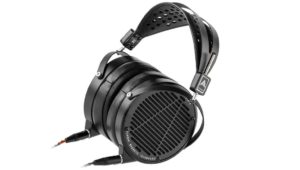