Surprisingly, our sample came in with just a transparent plastic case. It didn’t come with a retail box unlike most SSDs on the market. I was told that this is how they ship the SSD if you order one. The packaging doesn’t really include anything else, expect for the Ultima Pro X SSD itself and a 7mm to 9mm adapter. The adapter is used for laptops that are designed to house a 9mm storage drive instead of the more slimmer and popular 7mm form factor. 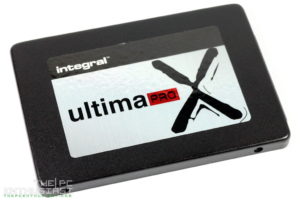 Just like Crucial’s SSDs, the aluminum housing has a clip and lock design and doesn’t use any screws. When I opened the SSD, it reminded me of the Patriot Ignite 240GB SSD I reviewed a couple of months ago. The color of the PCB is similar, the NAND flash chips used is also the same, including the cache and the controller. Probably the 240GB version of the Ultima Pro X looks the same with the Ignite SSD. The Ultima Pro X 480GB SSD has a total of eight Toshiba 15nm MLC NAND flash chips, number TP79G5ZASA. At the middle, you can see the Phison PS3110-S10 quad core controller, paired with a 256MB NANYA DDR3 memory for its cache.

Now let’s proceed to the next page and see how the SSD performs on our test system.