A few months ago, Kingston officially released their latest DDR3 memory module – the Kingston HyperX Savage Memory. The HyperX Savage DDR3 memory series is a high performance memory featuring a sleek looking low profile heatsink and black PCB. The new HyperX Savage replaces the old HyperX Genesis, but still features a low profile heatsink, making it perfect for those who are using large CPU coolers like the Noctua NH-D14 / NH-D15 or Cryorig R1 Ultimate. The HyperX Savage is geared towards gamers, enthusiasts and content creators who are looking for, not only performance, but eye candy as well. The specific kit I have here is the Kingston HyperX Savage DDR3-2400 16GB (2x8GB) memory kit (HX324C11SRK2/16), rated to run at 2400MHz CL 11-13-14-33 at 1.65V. Stick around and find out how “savage” is the HyperX Savage is in my review below. The Kingston HyperX Savage DDR3 memory module features a unique asymmetrical aluminum red heat spreader with diamond cut finish and black PCB. The heat spreader is a low profile type resulting in a height of just 32.8mm. Even if you have one of those very large CPU coolers, like the Noctua NH-D14 or Cryorig R1 Ultimate, compatibility won’t be an issue.

The entire HyperX Savage line is available from 1600MHz up to 2400MHz speed and in 4GB up to 32GB memory kit capacities. It also supports XMP profile and like the HyperX Beast, it comes with two XMP profiles. Kingston is also offering a lifetime warranty and free technical support. Check out the rest of the specifications from the table below, and then let’s take a closer look at the memory and its performance.

Kingston has been promoting the HyperX brand consistently. As you can see from the box “HyperX” is pretty much dominant and you won’t be seeing the name “Kingston” on the memory itself. The packaging is quite nice and simple, yet gives you that feeling that “this is a gaming memory”. 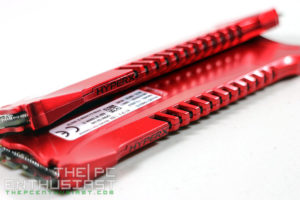 The nice asymmetrical design and those serrated-like edges look really nice. Compared to the Fury’s design, the Savage is more aggressive looking, but better in my opinion. The heat spreader is basically made of aluminum die-cast with a diamond cut finish. Black PCB has become a trend and most of us would want to use a memory stick with black PCB, or a motherboard and even a graphics card with black PCB. Green PCBs are no longer acceptable. For me it feels like you are using something from the early 2000s or late 1990s.

Kingston is using SKhynix H5TC4G83BFR memory chips on their HyperX Savage DDR3 memory. Not all SKhynix chips are alike, also when it comes to performance as well. According to SK hynix: “The H5TC4G83BFR-xxA is a 4Gb low power Double Data Rate III (DDR3L) Synchronous DRAM, ideally suited for the main memory applications which requires large memory density, high bandwidth and low power operation at 1.35V. DDR3L SDRAM provides backward compatibility with the 1.5V DDR3 based environment without any changes. SK hynix 4Gb DDR3L SDRAMs offer fully synchronous operations referenced to both rising and falling edges of the clock. While all addresses and control inputs are latched on the rising edges of the CK (falling edges of the CK), Data, Data strobes and Write data masks inputs are sampled on both rising and falling edges of it. The data paths are internally pipelined and 8-bit prefetched to achieve very high bandwidth.”

In testing the Kingston HyperX Savage DDR3-2400 16GB memory kit, I am using my Gigabyte Z97X Gaming G1 WiFi BK powered with an Intel Core i7-4770K. The rest of the system specifications are listed below: I also used the following software to monitor, test and benchmark the HyperX Savage: CPU-Z, AIDA64, wPrime, Asus RealBench 2.2, MaxxMEM2, and 3D Mark benchmark. In setting the clock speed to 2133MHz and 2400MHz, I used its XMP profiles. If you are using an Intel based motherboard, you can simply set the XMP profile by going to the motherboard’s BIOS. For AMD users, you will have to overclock it manually. 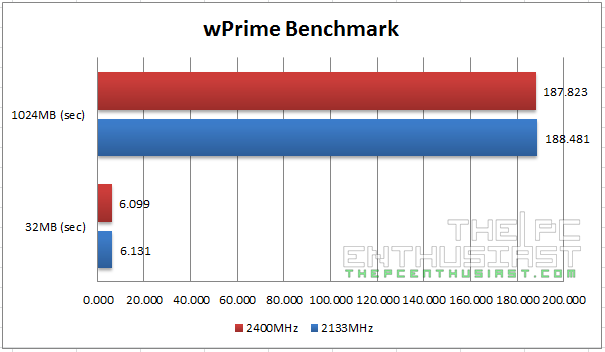 As you can see from the results above, performance difference was evident on AIDA64 test. Meanwhile the rest of the test indicates that there are no significant differences between 2133MHz and 2400MHz. Don’t get me wrong, there is a difference and the numbers say so. It’s just that the difference is not huge or significant. In real world use, you wouldn’t feel or experience any difference at all. But why would you settle for the 2133MHz when you can squeeze it up to 2400MHz? Better settle for the faster speed since memory intensive applications or operations would still benefit from the increase in speed.

However, it would be a different scenario when it comes to gaming. Compared to a 1200MHz memory, a 2400MHz is definitely faster. But that doesn’t mean FPS would also increase noticeably or significantly as well. Based on my experience, there is an increase, but that’s just around 5 frames per second, and most of the time the increase in not very noticeable while playing. Bottom line, upgrade your graphics card if you want to achieve higher FPS and smoother gaming experience.

I also compared the HyperX Savage with the other DDR3-2400 memory kits I reviewed before. The Kingston HyperX Beast, despite being an old product, is still a Beast when it comes to performance. The Beast is followed by the Savage, not bad for a memory with low profile heat spreader. The Kingston HyperX Savage is a great addition to the HyperX lineup and a worthy successor of the Genesis series. Aesthetically speaking, it looks great and will definitely add eye candy to your system or gaming rig. The heat spreader is firmly locked to the memory chip as well, and won’t easily come off. This would also be a great option specially if you have large CPU coolers where memory heatsink height is usually an issue. Again, the Savage have low profile heat spread, the height is just a tad higher than the PCB.

Wait, you might be wondering where the “overclocking section” is? Well, I didn’t forget the OC section. Unfortunately I wasn’t able to push the memory any further. With the kit I got, the 2400MHz was pretty much its limit. Take note, at 2400MHz it was already running at 1.65V. It’s not practical anymore to push it further to 2600MHz or increase its voltage. However, I wouldn’t say that would be the case with the HyperX Savage 1600MHz or 1866MHz models. You may be able to push them further since they have still room for overclocking.

To sum it up, the HyperX Savage DDR3 2400 16GB (HX324C11SRK2/16) memory kit is another great product from Kingston. It’s a highly reliable memory and it hasn’t failed me or disappointed me. It is also glad to know that they are 100% factory tested before they reach store shelves, and are back with a lifetime warranty. Finally, the HyperX Savage deserves The PC Enthusiast’s Highly Recommended Award.