Storage drive has become one integral part of our daily lives, specially for those who use and store digital files. Storage drives comes in different sizes and capacities. Today we are going to look at one of Lexar’s microSD card – the Lexar 633x 64GB microSDXC UHS-1/U3 (Class 10) LSDMI64GBSBNA633R. The Lexar 633x microSD is a small portable storage solution primarily used in mobile devices like smartphones, tablets and even digital cameras. The 633x series are available in four difference capacities; 16Gb, 32GB, 64GB and 128GB. What we have here is the 64GB capacity. Before we proceed, I’d like to thank Lexar for providing the sample for the purpose of this review. 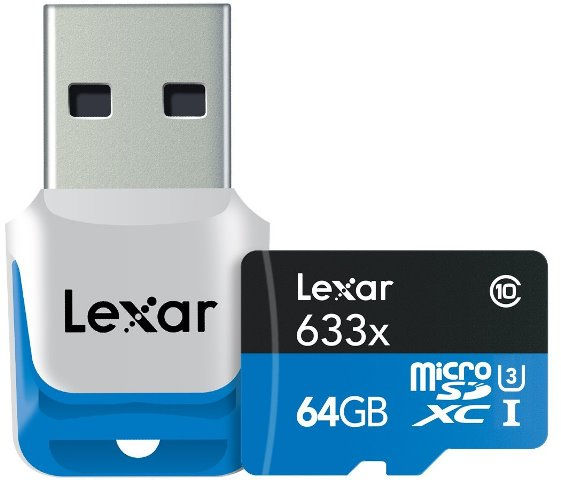 Before I begin, I’ll just give some information for those who are still lost or have no idea regarding the terminologies or those numbers and letters you see on memory cards.

*You can read more about these from sdcard.org.

The Lexar 633x is basically a high performance Micro Secure Digital Xtended Capacity card with Ultra High Speed class having a speed of up to 95MB/s. It’s basically designed for smartphones, tablets, sports camcorder and digital cameras that uses microSD card for storage. Since it has a rated speed of up to 95MB/s, it’s an ideal storage solution for 1080p full-HD, 3D and 4K video capture, high resolution photos and even media files. The company is so confident with the product that they are offering a lifetime warranty for the card.

The Lexar 633x microSD card series also comes with a handy USB 3.0 card reader. Most of the storage companies usually advertise their memory cards with speeds of up to 60MB/s or 95MB/s or even up to 280MB/s. But that doesn’t mean that both the read and write speeds are on the same speed rating. And that’s one thing we are going to find out in this review – the card’s actual performance.

I haven’t tried the lower capacities (16GB and 32GB microSDHC 633x), but based on experience, higher capacities tend to have a better read/write speed compared to the SD cards with lower capacities. Below are photos of the packaging of the Lexar 633x. Conveniently, it comes with a USB 3.0 reader so that you can easily connect the microSD card to any computer via USB. This is really useful specially if you don’t have any card readers. You can read some of the features of the Lexar 633x from the packaging.

The 64GB microSDXC itself is protected by a small case. It is best that you keep the microSD inside the small case when not in use. Above are close up photos of the Lexar 633x 64GB microSDXC. You can see the symbols for USH-I, Class 10 and U3 in front of the card. I’m not sure if Lexar’s 633x are water proof, temperature proof, shock proof or even X-ray proof because I can’t find any information regarding its protection or durability. It’s not indicated on the packaging and even from the official page. Here are photos of the included micro SD USB 3.0 card reader. It’s small and doesn’t have any LED indicator. It can also be used to with other microSD cards. 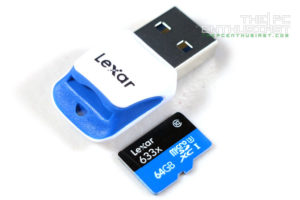 In testing the Lexar 633x 64GB MicroSDXC, I used the included card reader and plug it in my test bench. I also used a third party card reader just to check if there is any performance difference. I used ATTO Disk Benchmark tool, HD Tune Pro, CrystalDiskMark, and Anvil’s Storage Utilities to benchmark the microSD card’s performance. I also used TeraCopy to benchmark its actual performance while transferring files to and from the microSD card. Below are the results: 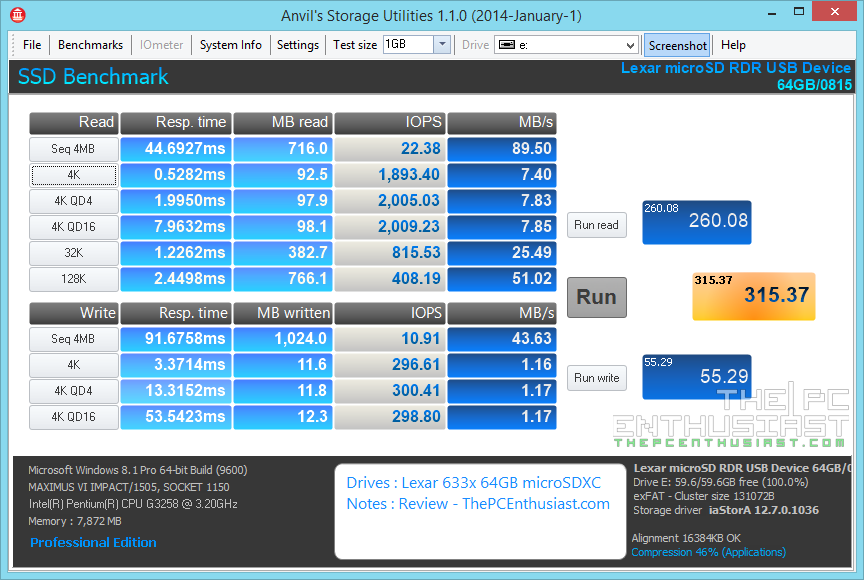 If you take a look at the benchmark results of the Lexar 633x microSDXC using Anvil’s Storage Utilities, you will notice that its read and write speeds remain closely constant regardless of the file type. It performed similar whether the file is compressible or incompressible. There are storage drives, specially SSD, where write performance tends to decline with incompressible files. Below are benchmark results of the Lexar 633x microSDXC using a third party card reader, the Kingston MobileLite G4. The Lexar 633x 64GB microSDXC looks like a very competitive microSD card. It remained very close to its advertised speed, At least for the read speed. Its actual write speed is just half of its read speed. With that kind of performance, you can safely shoot full HD 1080P videos or even high resolution photos. Although I haven’t tried shooting it with 4K since we currently do not have any 4K capable digital camera in our lab. The included USB 3.0 microSD card reader is a plus factor as well, since some (or most) companies do not include a card reader.

It would be great if Lexar could indicate how durable the Lexar 633x or certify whether the card is resistant or proof against certain conditions or environment. Other than that, I think the Lexar 633x is a very capable microSD with very competitive pricing (street price). When shopping for a microSD, this should make your list shorter.