Today is the official launch date of the new GeForce GTX 1070 Ti and MSI has released five custom GTX 1070 Tis for you to choose from; Titanium, Gaming, Duke, Armor and Aero. Each graphics card sports different aesthetics and physical designs. But clock speeds are the same on all (GTX 1070 Ti) graphics cards, regardless of brand or make. The new GTX 1070 Ti targets AMD’s Radeon RX VEGA 56 and sits in between the VEGA 56 and VEGA 64 in terms of performance. These cards share the same aesthetics, design and looks from their predecessors, but the real difference lies under the hood. The new GTX 1070 Ti features the same GP104 chip, but with more CUDA cores compared to the GTX 1070, and just a few cores less compared to the GTX 1080. The GTX 1070 Ti Founders Edition comes with a manufacturer’s suggested retail price of $449 and will become available starting November 2. Expect MSI’s graphics cards will also become available shortly after. Prices for these custom cards are yet to be confirmed, but I’m guessing that the prices will not be too far from the MSRP since clock speeds are pretty much the same. Check out more details including their full specifications below. 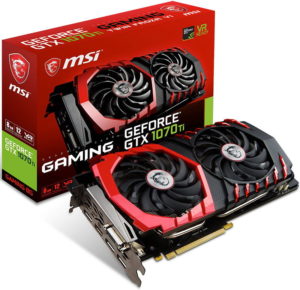 MSI is proud to announce a full line up of graphics cards based on NVIDIA’s new gaming GPU. Building on the monumental success of MSI’s award winning GAMING series, the MSI GeForce GTX 1070 Ti Titanium 8G and GTX 1070 Ti GAMING 8G come equipped with the full force of the TWIN FROZR VI cooler, allowing for higher core and memory clock speeds for increased performance in games. The famous shapes of the eye-catching TWIN FROZR cooler are intensified by a fiery GAMING glow piercing through the cover, while the MSI GAMING dragon RGB LED on the side can be set to millions of colors to match your mood or build. A completely new custom 10-phase PCB design using Military Class Level components with 6-pin and 8-pin power connectors enables higher performance to push your graphics card to the max. DUKE
With a large triple-fan cooling solution, DUKE is made for users that prioritize a massive airflow to keep their beastly card cool. It features a custom PCB that shares its design with MSI’s dominant GAMING series cards. 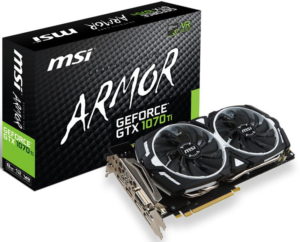 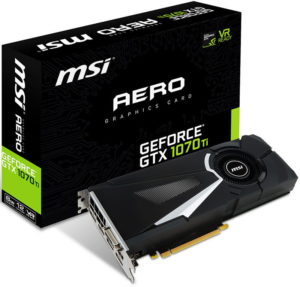 AERO
Sporting a sleek Black & Silver look, the MSI GeForce GTX 1070 Ti AERO 8G will look great in any build. The AERO graphics cards feature a thermal design built around a radial fan which pushes all the heated air out of the PC via a rear exhaust, keeping the rest of your components cool.