The new MSI GeForce GTX 1080 Ti GAMING X TRIO looks like a longer version of their GAMING X/Z graphics card; similar to their DUKE and LIGHTNING variants. It also features RGB lighting and has MSI’s Gaming Dragon back plate design. Like most of MSI’s graphics cards, this too has an OC mode, Gaming mode and Silent mode. Below are the speeds: 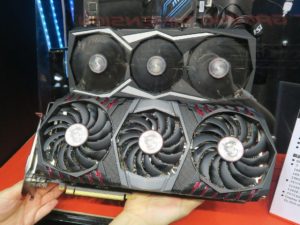 For connectivity options, is has the usual Dual Link DVI port, two HDMI ports and two DisplayPorts. It draws power from two 8-pin PCIe power connector; and power consumption is reported to be at 250W and will require at least 600W of power supply.