MSI has recently officially unleashed the all new MSI R9 290X LIGHTNING Graphics Card, an upgraded and improved version of the R9 290X GAMING edition. The MSI R9 290X Lightning edition was engineered to handle extreme overclocking, just like what EVGA had done with their GTX 780 Ti KINGPIN. Check out the rest of its features, specifications, price and availability below. VGA FAN CONTROL:
– MSI’s exclusive software and only for R9 290X LIGHTNING.
– Temperature of GPU and PWM on the interface.
– Control the fan speed via two PWM controllers automatically or manually.

The MSI R9 290X Lightning features a TriFrozr Thermal Design that has been optimized to efficiently dissipate hear from the GPU and on-board components ensuring stability and that heat will not hinder the performance of the card even when in extreme overclocking configurations. It draws its power from 2x 8-pin and 1x 6-pin power connectors on board guaranteeing a minimum 450W available for overclocking. The R9 290X Lightning also features a GDDR5 memory that has been optimized, in cooperation with AMD, to deliver the best overclocking results using air cooling or when using Liquid Nitrogen when doing extreme overclocking.

The MSI R9 290X LIGHTNING is the first product to bear the new MSI OC Series logo which should be a clear indication of the enormous potential of the card in the hands of extreme overclockers. It features 12 GPU phases in an innovative solution to deliver the most stable voltages to the GPU when pushing extreme benchmarks. This is done through laying out the VRM components on both front and back side of the PCB. The optimized memory configuration promises new levels of memory overclocking on AMD’s R9 series. Extreme overclockers can use the special LN2 BIOS on the card to reach for overclocking records without special hardware modifications. The MSI R9 290X LIGHTNING has 3x OC kits making you in complete control of the graphics card. V-Check points allow you to accurately measure GPU, Memory and PLL voltages. Triple Temp Monitor checks the real-time temperatures of the GPU, Memory and PLL while Triple Overvoltage allows you to over volt those same components in order to achieve higher clock speeds. It also features Military Class 4 components making the R9 290X Lightning withstand even the toughest conditions, either in freezing sub-zero temperatures of scorching hot high temperatures.

The MSI R9 290X Lightning also features Twin BIOS meaning it includes two separate BIOS chips, one for Gaming and one specially for extreme overclockers. Just one click switch to LN2 BIOS and release overall overclocking potential. It also has Gold-Plated Connector to provide better signal transmission and rust protection. It can maximize display connectivity and expand lifetime of your graphics card. 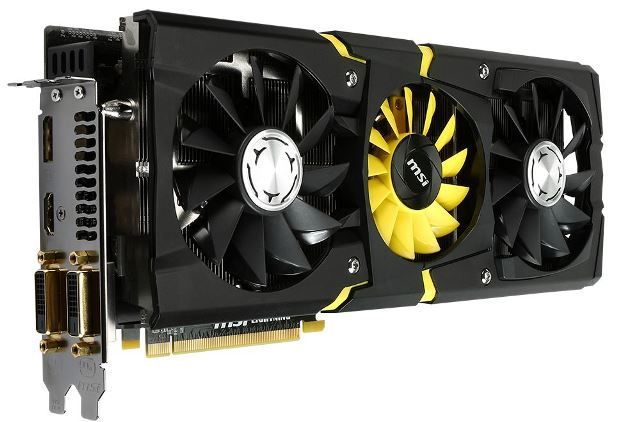 According to Overclock3D, the MSI R9 290X Lightning is priced at £529.99. If we convert that to USD, that’s somewhere in $880 USD. It’s definitely higher than the R9 290X GAMING edition, which is currently priced at $699.99. It will also become available in the following days or weeks to come.

Just a thought, the MSI R9 290X Lightning looks like a great graphics card, specially for PC Enthusiasts who loves to tweak and overclock a lot. But the $880 USD price seemed to be too high for this card, making the GTX 780 Ti a more attractive alternative.