MSI recently unleashed a Black and White variant of their X99S, following the success of their Z97S Krait motherboard, the MSI X99S SLI Krait Edition. Like the Z97S SLI Krait, the X99S SLI Krait Edition is mainly a black motherboard with white accent. It supports the new Intel Core i7 in LGA 2011-3 socket, including the Extreme Edition, and it supports Quad Channel DDR4-3333(OC) memory. It also supports NVIDIA Quad SLI or AMD Quad CrossFire for maximum gaming performance. It features Turbo M.2 that delivers next generation M.2 Gen3 x4 performance with transfer speeds up to 32Gb/s and SATA Express + USB 3.0 + SATA 6 Gb/s. It features a 12 Phase DigitALL power design with Military Class 4 high quality components. Overclockers will also find the MSI X99S SLI Krait to their liking, since it features OC Engine for more flexible BCLK adjustments, Guard-Pro, OC Genie 4 and Click BIOS 4. Check out the rest of its features and specifications from the official release below. The MSI X99S SLI Krait Edition motherboard perfectly caters to those looking for something different in terms of design but desire nothing but the best in terms of features and power.

Optimized for multiple graphics cards
The MSI X99S SLI Krait Edition motherboard support Quad SLI and features four PCI Express 3.0slots perfectly aligned and with enough space for an optimal airflow when using multiple graphics cards. That way, there is no need to worry about an overheating PC, while enjoying the best graphics jumping off from your monitor when running an Nvidia SLI or AMD CrossFire gaming setup. Next generation storage, SATA Express & Turbo M.2
Enjoy a blazing fast system boot up and insanely fast loading of your operating system, applications and games with MSI X99 motherboards, offering the next generation of high speed storage support through Turbo M.2 and SATA Express. Turbo M.2 is the successor to M.2 10 Gb/s, offering 3 times more performance up to 32 Gb/s using Gen3 x4. M.2 is packed in a small form factor and is compatible with 3 different sizes to fit most storage solutions. All latest generation Intel based MSI motherboards feature Turbo M.2 storage.

Stable and highly efficient with Military Class 4 and Guard-Pro
MSI Guard-Pro is the next step in motherboard stability with advanced levels of protection and reduced power consumption characteristics. ECO power reduces power consumption of your motherboard up to 29%, circuit protection, ESD protection and EMI protection all reduce interference and disruptions of surface by increasing the protection of on-board components. Humidity and high temperature protection bring the level of PCB quality up to the Military Class 4 standard where Dark Caps, SFC and Dark chokes provide higher energy efficiency and thanks to its Military Grade certification also much better stability in extreme circumstances. 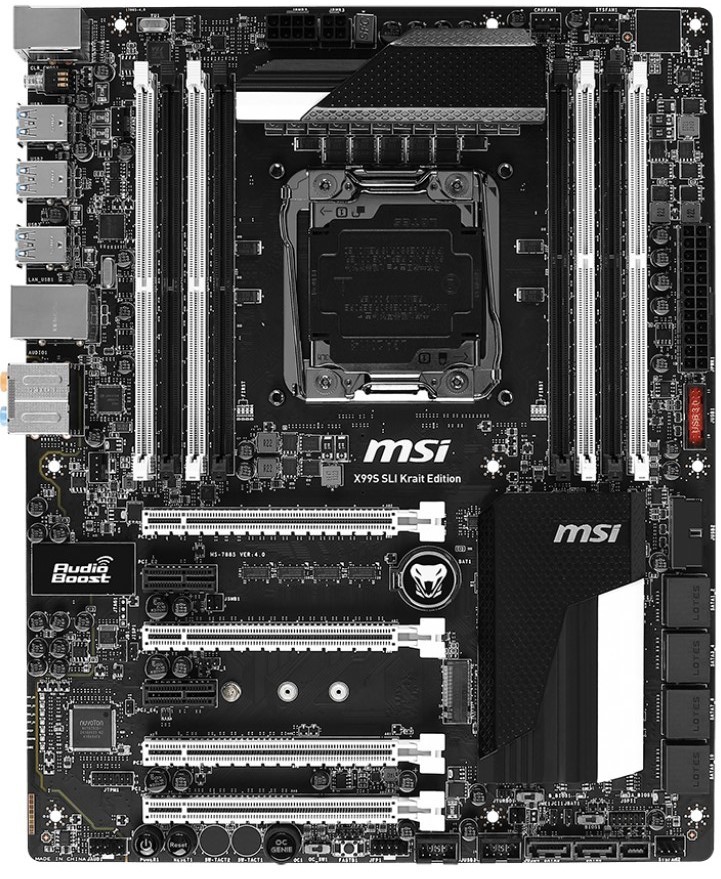