The MSI Z97 Gaming 9 AC is the flagship of the Gaming lineup. It is the most featured motherboard compared to the other series. For starters, it features a 12 Phase power design that draws its power from an 8 pin power connector. The LGA1150 socket is surrounded by Military Class IV Super Ferrite Choke (SFC), which are then hidden by a heat sink. On the other side are four DDR3 DIMM slots supporting up to 64GB. MSI also used a new heat sink design for the chokes and the Z97 chipset. It also has the new V-Check Point 2, OC Engine and other tools for overclocking. Basically if you look at the motherboards, it is almost the same as the current Z87 Gaming motherboards. There are no significant changes in the board’s layout, but there are added features that we don’t see in the previous boards. One of these new features is the inclusion of a M.2 PCIe slot supporting M.2 NGFF SSD, in three different sizes. For the Gaming 9 AC, it has a metal shielding on the rear I/O ports and on top of the Audio core. Aside from the Killer E2200 network controller, it also has a built-in WiFi 802.11AC adapter.

The MSI Z97 Gaming 9 AC features 3x PCI Express 3.0 x16 slots and tree PCIE 3.0 x1 slots. It also has 8 SATA 6Gbps ports, and an array of USB 3.0 ports and headers. It also features the latest Audio Boost 2 with Xtreme Audio DAC which is hidden under a metal shroud. I don’t have prices for now, since this isn’t the official release yet, but more or less it will replace the current Z87 Gaming flagship. Price should be around that margin.

Next are the MSI Z97 Gaming 7, Z97 Gaming 5 and Z97 Gaming 3 motherboards. These three have more or less the same set of features, leaving the Gaming 3 the least featured amongst the three. But like all Z97 motherboards, all three of them have M.2 PCIE slot for NGFF SSD. If you look at their respective images below, you will immediately see the difference in terms of their specifications. 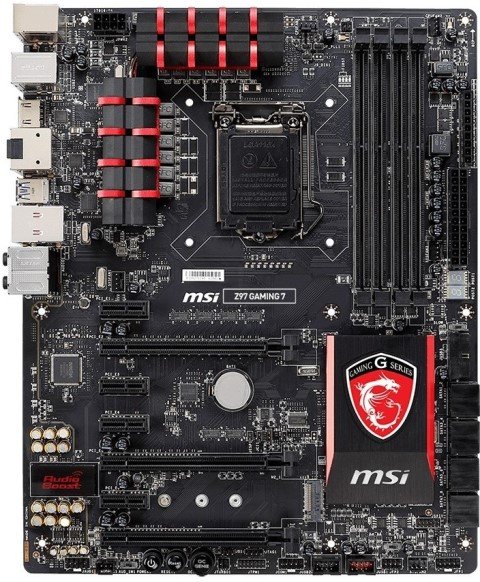 If you look at the MSI Z97 Gaming 3 you’ll notice that it has lesser SATA ports, no Power or OC buttons, no LED, and it only has 2x PCIE x16 and x3 slots, and tree legacy PCI slots.

If you think the MSI Z97 Gaming 3 is still out of your budget range and you don’t really need any of those overclocking features, MSI has included a non-Z97 in their Gaming lineup – the MSI H97 Gaming 3. Basically both the Gaming 3 motherboards are the same. They even look identical, except for one letter before the number 97. It features Intel H97 Express chipset which is cheaper than the Z97. Finally, we have the MSI Z97I Gaming mini ITX motherboard. Despite its size, do not underestimate this little board. This is the sole successor of the Z87I GAMING AC. It has 4x SATA 6Gbps ports, 2x DDR3 slots, one PCIE x16 slot, Killer E2200 LAN and built-in WiFi 802.11, and Audio Boost 2. Basically it is an updated version of the Z87I Gaming. 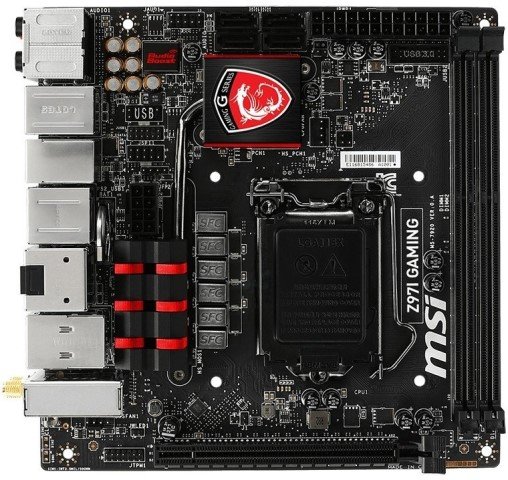 The MSI Z97I Gaming Mini ITX motherboard is design for PC gamers who likes it to be discrete but at the same time very much capable like the ATX variants. But one thing I noticed is that the socket is close to the PCI E slot. You might not be able to install CPU coolers with large heat sinks if there is a graphics card installed.

Aside from the MSI Z97 Gaming 9 AC motherboard, the company has still a higher end variant for overclockers and enthusiasts. These are the MSI Z97 XPOWER AC and MSI Z97 MPOWER MAX that are expected to be revealed in the following days or weeks to come. But I don’t see any mATX in the lineup. Perhaps MSI would release one soon. There are also a lot of PC Gamers who use an mATX motherboard, and I doubt that MSI would skip this niche.

The upcoming Z97 motherboards feature the same LGA 1150 socket that is being used by the 4th generation Intel Haswell processors today. This means that the Z97 are compatible with the Haswell, Haswell Refresh, Devil’s Canyon and the 5th generation Intel Broadwell processors. So, rest assured that you are more or less future proof for another year or two. The only time that I think you need to ditch your Z97 motherboards is when DDR4 motherboards becomes available.