Late Q1 this year, Noctua released the Noctua NH-U12A premium 120mm CPU air cooler. It has the traditional Noctua color theme that many are not a fan of; but superb craftsman ship, high quality and attention to detail are very much present. The NH-U12A features two NH-A12x25 120mm PWM fans and it’s basically a single tower CPU cooler. But what really gets me excited about this cooler is its performance. It’s not a huge and bulky dual tower type cooler like the NH-D14, yet it performs similar to an AIO liquid cooler. And it doesn’t block the RAM slots on an Intel LGA115x and AMD AM4 based motherboards. If you are in the market looking for a CPU cooler, stick around and continue reading our Noctua NH-U12A review below. This could probably be your next (or first) premium CPU cooler.

CPU air coolers require minimal maintenance. Dusting off the fan and the heatsink is all you need to maintain it. You could also clean the heatsink to keep its shine. Another advantage of an air-type CPU cooler is that there is no risk of liquid leaking (worst – bursting) in your system’s components. And finally, it is generally cheaper than an AIO liquid cooler.

I can only think of a few disadvantages of using an air cooler. First that it tends to be big and heavy. Second, most air coolers do not perform as good as a liquid cooler. Some do, but generally speaking, AIO or custom liquid coolers are still better when it comes to cooling the CPU, or GPU.

Now, (AIO) liquid CPU coolers look much “cleaner” or less bulky on the system. And by “cleaner”, I mean it is more aesthetically pleasing and there’s no huge chunk of metal sticking out the motherboard, or above your graphics card. However, liquid CPU coolers have risks that an air cooler doesn’t; risks like pump failure and/or liquid leaking out. Not to mention, liquid coolers are typically more expensive than an air cooler.

Pump failures could cause your CPU to overheat, and liquid accidentally leaking can damage the components in your system. So, there is a tradeoff. You get better performance with a liquid cooler, and better aesthetics at the expense of higher price and the risks I just mentioned.

On the flip side, air coolers aren’t as efficient as liquid coolers, but those hazardous risks do not exist with air coolers. Not to mention, it’s a cheaper solution than liquid. Whether you want an air cooler or liquid cooler is totally up to you.

However, I think the Noctua NH-U12A is somewhat the middle ground. It performs similar to a liquid cooler, yet it is not as big and bulky as a two-tower air cooler. It’s not a cheap air cooler as well, but it’s not as expensive as a liquid cooler. Let’s go ahead and take a closer look at this cooler after the specs below. Noctua’s CPU coolers are packaged in a sturdy cardboard box material; with a combination of Brown, White and Blue-highlight on the outer surface of the box. The company has been using this color theme and box material for quite a long time. It’s sturdy and well compartmentalized inside the main box.

Aside from the CPU cooler and two NF-A12x25 PWM fans; the box also includes two low-noise adapter, a 4-pin PWM Y-cable, the SecuFirm2 mounting system for Intel and AMD, a unspecific amount of high grade NT-H1 thermal compound, a Noctua metal case-badge, reading materials and a specialized screw driver that you will need to install the CPU cooler.

The thermal compound included is enough, I guess, for several applications. Don’t quote me on this, but perhaps around 5-10 installations. It’s a rough estimate, give or take, depending on how much thermal compound is applied. Nevertheless, it is plenty enough compared to the CPU coolers in the market. All the tools that you need to install the NH-U12A are included in the box. Out of the box, the two fans are already attached to the heat sink. But you will have to remove the fans to install the CPU cooler. The CPU cooler measures 158mm in height, 125mm in width including the fans and a depth of 112mm. It weighs 1,220 grams including the two fans.

According to Noctua’s list of compatible CPUs, the NH-U12A can comfortably handle the latest flagship mainstream CPUs from AMD and Intel; the Intel Core i9-9900K and Ryzen 9 3950X. Of course, anything lower than these CPUs can be cooled by the NH-U12A as well. 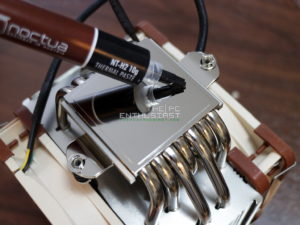 The NH-U12A is basically the 5th gen of the company’s U12 series. But this one features a completely redesigned heatsink; now with 7 heatpipes and increased fin surface. According to the company, although it has a 120mm body design, it can match the performance of a 140mm sized CPU air coolers, even dual tower type.

The base and heatpipes are copper, while the cooling fins are aluminum. The joints are soldered properly so that heat would transfer from the base to the aluminum fins efficiently. Finally, nickel plating is applied to avoid or minimize corrosion. The NF-A12x25 PWM fans included with the NH-U12A are fantastic fans. They are highly optimized fans, runs very silent and simply a product of state-of-the-art engineering. Unlike the other fans I have held in my hands before, the NF-A12x25 feels premium and solid. The fan blades are noticeably thicker and feels robust. It’s simply on another level. You can read more about its feature from Notua’s site here. Above is a closer look at the NH-U12A heatsink without the fans. I like how Noctua makes their heatsink. It’s just so clean and well crafted. You do get what you paid for, and I think they have the right to slap that word “premium” on their products. 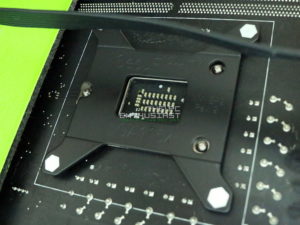 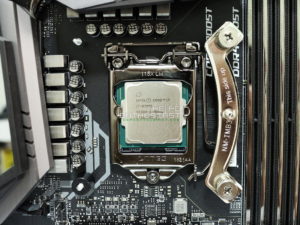 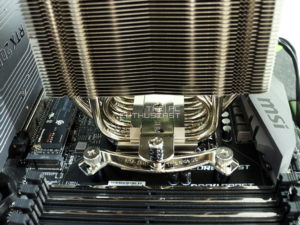 Once the mounting system is installed, you can install the heatsink or do it later. It does take a decent amount of space and you don’t want something obstructing while you work on the case or install other components. That’s why I prefer to install the heatsink together with its fans later. 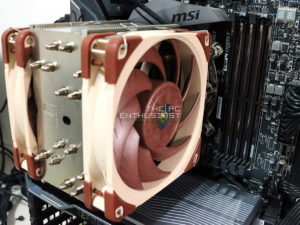 Another great feature of this CPU air cooler is “100% RAM compatibility on LGA115x and AM4”. Even with both fans installed, the front intake fans do not obstruct with the RAM slots on an Intel 115x and AMD AM4 based motherboards. As you can see from the photos above, there is still a space, so tall DDR memory is not an issue.

However, Noctua does mention that on LGA2066, the rear fan will overhang the RAM slots on the left-hand side of the socket, so RAM modules should not exceed 42mm in height. And In cases with more than 158mm CPU cooler clearance, the rear fan can be moved upwards to make room for memory modules taller than 42mm.