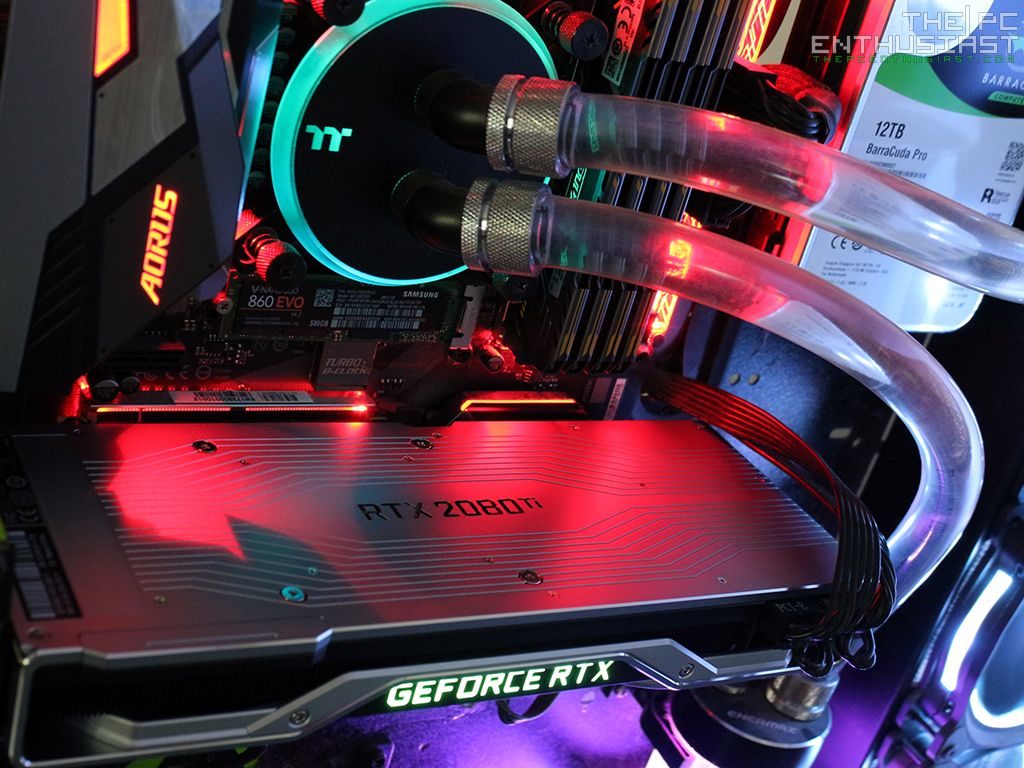 In testing and benchmarking the NVIDIA GeForce RTX 2080 Ti Founders Edition, our test system is powered by an 8th Gen. Intel Core i7-8700K, overclocked to 5GHz. The CPU is installed on a Gigabyte Z370 Aorus Gaming 5 motherboard. Below are the rest of the system specifications:

When I tested the graphics cards, I was using the GeForce driver version 411.51 for Windows 10 64bit. All games are tested in three resolutions, namely: 1920×1080 or full HD, 2560×1440 or WQHD and 3840×2160 or 4K ultra HD. For the synthetic benchmarks, I used the benchmark tools from 3DMark and Unigine 2. I also used the following games to test the graphics card: Battlefield 1, Deus Ex: Mankind Divided, Final Fantasy XV, Ghost Recon: Wildlands, Mass Effect: Andromeda, Middle Earth Shadow of War, Monster Hunter World, Shadow of the Tomb Raider, Star Wars Battlefront II and The Witcher 3 Wild Hunt.

Below are GPUz and GPGPU screenshots of the GeForce RTX 2080 Ti Founders Edition: 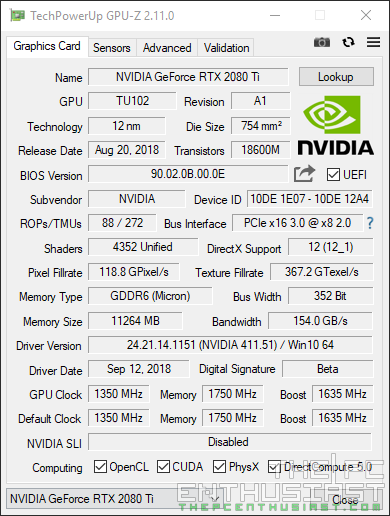 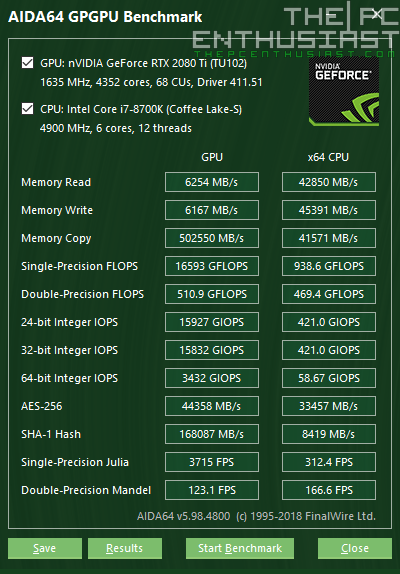 The previous Founders Edition cards are quite notorious for their noise level, specially when pushed to their limits. Blower type coolers tend to get more audible and loud compared to custom designed coolers. But that’s all in the past now. With the new cooler design on the GeForce RTX 20 series Founders Edition graphics cards, the noise level is significantly reduced and inaudible most of the time. I don’t have an accurate sound meter, but my ears are just 2 to 3 feet away from my open test system. And the GeForce RTX 2080 Ti Founders Edition is inaudible at light to medium load, and depending on the fan speed.

To be specific, below 50% of fan speed the card is inaudible; it starts to get audible at 50% above. At 60% the card starts to get noticeable audible, remember I am using a Thermaltake Core P5 case which is very open. For closed case system, you may or may not hear the fans starting to speed up. But at 70% it starts to become noisy but not obnoxiously loud. The fans, combined with the gushing of air, becomes loud at around 80%. Finally, 90% and above, the card sounds like a small drone hovering. 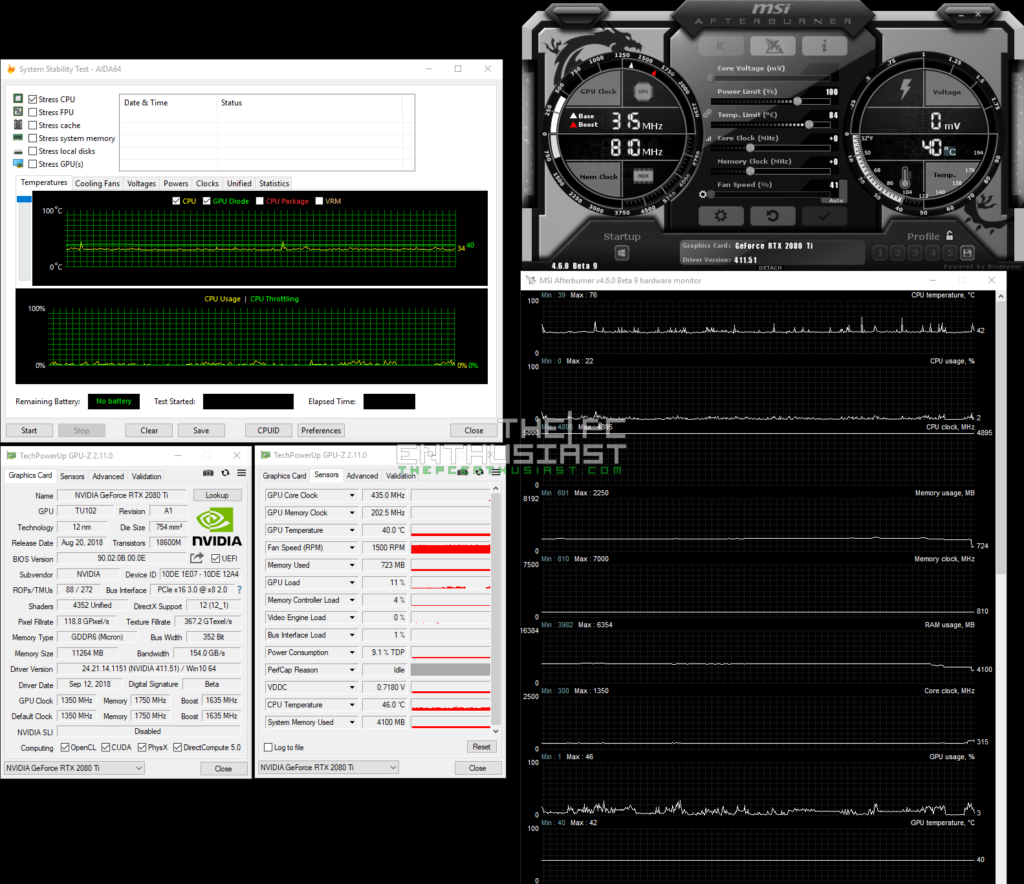 As for temperature, the GeForce RTX 2080 Ti Founders Edition’s new cooler design is doing a great job at keeping the temperatures low and heat at bay; similar to what you expect from a custom cooler design. During light to medium workload and normal desktop operation, the temperature just hovers around 40° Celsius. Fans do not stop though, but they are running at around 40% fan speed, which I believe is the minimum speed when in default. 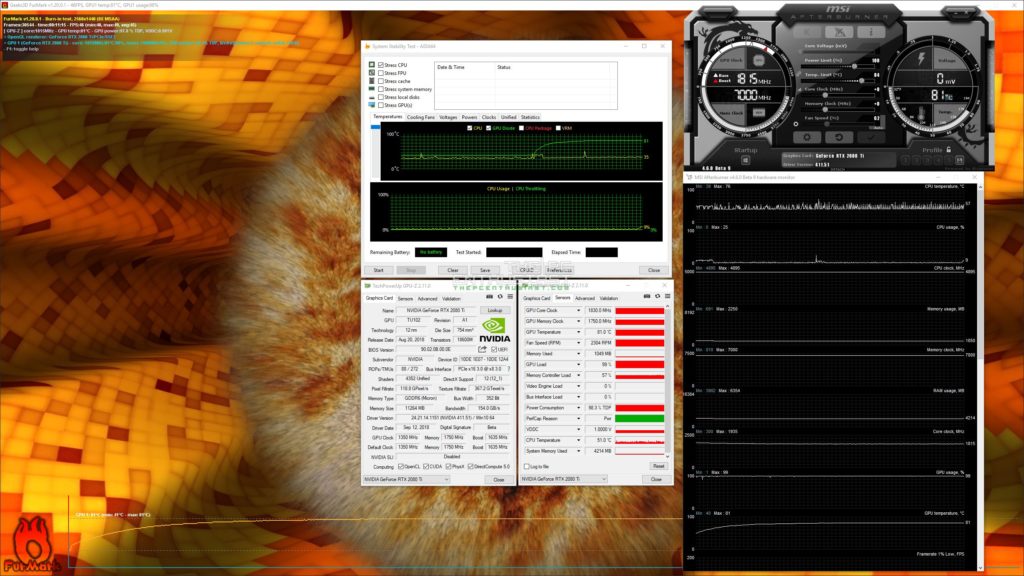 The fans start to kick in once the graphics card is stressed out or runs at around 100% load. Temperature could get as high as 81° Celsius and the fan speed goes up to around 62%. Note that the heat coming from the graphics card is blown sideways. Meaning towards the motherboard and towards the side (of the case) or away from the motherboard. Heat is not exhausted through the rear output ports due to the design and positioning of the vapor chamber / aluminum fin stack.

Finally, it’s time to see what kind of scores and frames per second we get from the RTX 2080 Ti Founders Edition. Proceed to the next page for the benchmark results.