NZXT recently released their latest mini-ITX tower case that interestingly looks like the upcoming Xbox Series X – the NZXT H1 mini-ITX case. This case occupies a small footprint but it’s fairly tall, and this thing isn’t cheap. It cost $350 USD (MSRP) since you are not only paying for the case. The NZXT H1 already includes a PSU, an AIO liquid cooler and a riser card; that’s why it’s a bit pricey. It is available now and you can order one from Amazon here. If you want to learn more about this mini-ITX case, check out more details below and watch a video review as well. 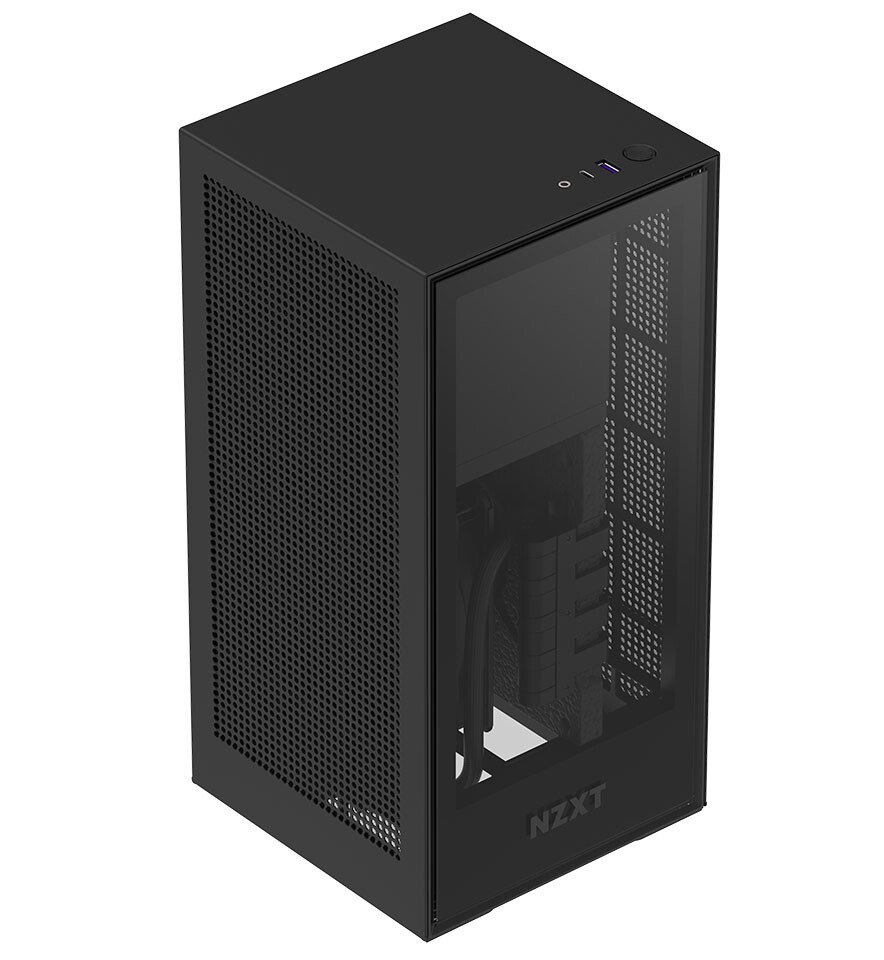 While it doesn’t look exactly like the Xbox Series X, it does remind me of it. The NZXT H1 is a small form factor mini-ITX case that is great if you want to save space or you want a minimalistic setup. It is small at only 13.6 liters and already includes a compatible PSU, an AIO liquid cooler and a PCIe riser.

The included PSU is an SFX-L 650W 80+ Gold power supply, with an 140mm all-in-one liquid CPU cooler and a high-speed PCIe x16 Gen3 riser card for the graphics card. Speaking of graphics card, it only has a GPU clearance of up to 2.5 slots. So, you can’t install those big chunky graphics card that occupies 2.7 or 3 slots.

The NZXT H1 is made of SGCC steel with tempered glass on the front side panel. The company designed the H1 in such a way that air could freely flow in and out of the case to prevent thermal throttling on the components. For cable management, the cables are pre-routed and the Input/Output terminal is located at the bottom of the case, rear-facing, for a cleaner look.

Aside from the NZXT H1 mini-ITX case, the company also announced a pre-built system using the H1 as the chassis – the NZXT BLD H1 Mini PC. It is powered by an Intel Core i9-9900K paired with 16GB of DDR4-3200MHz memory (Team T-Force Vulcan). The CPU is paired with an NVIDIA GeForce RTX 2070 Super Founders Edition and the motherboard is an Asus ROG Strix Z390-I with WiFi. It has an Intel 660p 1TB for storage and runs on Windows 10 Home Plus.

The NZXt H1 case is now available and comes with a manufacturer’s suggested retail price of $349.99 USD. It is available in matte black and matte color. Meanwhile, the NZXT BLD H1 Mini PC with the said specs above, comes with an MSRP of $1,999.99. The BLD H1 Mini PC is available via NZXT’s site. For latest pricing and availability of the NZXT H1 mini-ITX case you can check out the link below.

For US: NZXT H1 available on Amazon.com here

There are several NZXT H1 reviews out now and here’s a video review courtesy of HardwareCanucks. They did a pretty good job at reviewing this new mini-ITX case and I think you should check it out as well: