Solid State Drive or SSD has become very popular over these past months/years. Not only that SSDs have become more affordable, but they have also evolve fast that the SATA III 6Gbps interface has become a bottleneck and a limiting factor already. Nowadays, we see SSDs reaching close to 600MBps (560MBps to be exact, or more) in sequential read speeds. Thus the need to utilize the PCIE interface was adapted and the M.2 interface for NGFF (Next Generation Form Factor) was born. Today, let’s going to look at and review the Plextor M6e PCIE 256GB SSD featuring an M.2 NGFF, attached to a PCIE add-in card for PCI-Express slots. Find out how fast this SSD can go below. 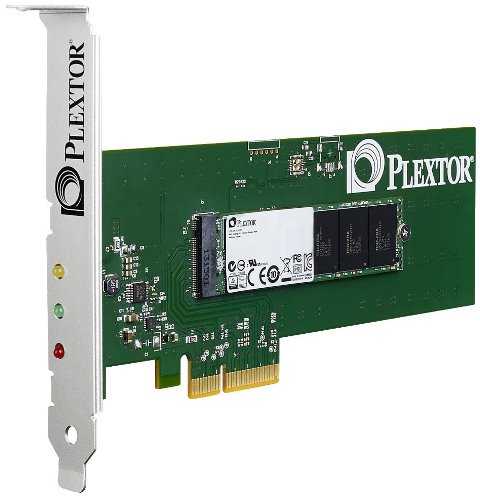 The Plextor M6e PCIE SSD is one of the first solid state drives to utilize the PCI-Express interface for the regular consumers. M.2 NGFF SSDs are small, just like an mSATA SSD, but you shouldn’t confuse an mSATA SSD with a NGFF SSD. An mSATA SSD uses a “mini” version of a SATA 6Gbps port, and like its 2.5-inch cousins, it is still limited to 6Gbps in terms of speed. Meanwhile an M.2 NGFF SSD takes advantage of the PCI-Express interface which can accommodate up to 10Gbps of transfer speeds. You can’t plug an M.2 NGFF in an mSATA port and vice versa.

If the Plextor M6e PCIE SSD is based on M.2 NGFF, why is it attached to a PCIE add-in card? Why not sell it as an NGFF alone? You see, when Plextor first introduced and released the M6e, Z97 and H97 based motherboards were not released yet at that time. Thus, the SSD itself is attached to a PCIE add-in card so that you can use it on existing Z87 and other older platforms as long as it has a PCI-E Gen2 slot.

Thanks to its PCI Express interface, the M6e is capable of delivering maximum sequential read speed of 770MB/s and maximum sequential write speed of 625MB/s (for the 512GB variant), and random read/write speeds of 105,000 / 100,000 IOPS. It supports TRIM and Garbage Collection technologies, and supports both UEFI and legacy BIOS booting. It also fully supports AHCI Mode (Advanced Host Controller Interface), thus eliminating the need for additional drivers.

According to Plextor, the M6e PCIE SSD has passed the 48hr sustained read/write test, 4000 times idle test-sleep and hibernation test and 250 times power cycle-cold and warm boot tests. It has a Mean Time Before Failure (MTBF) of 2.4 million hours and is backed by a full five-year Plextor warranty with the reassurance of a network of repair centers and international technical support.

Check out the rest of its specifications below and let’s take a closer look at the Plextor M6e SSD below, and find out how well does this SSD perform.


Note: *Results may vary based on hardware, software and overall system configuration.

The Plextor M6e comes in a nice red rectangular box, nothing fancy about it. And you’ll be glad to know that the SSD itself is securely tucked-in between two cushions. Inside the box you get a quick installation guide, a VIP pamphlet where you can see the support contact information and the M6e PCIE SSD itself. 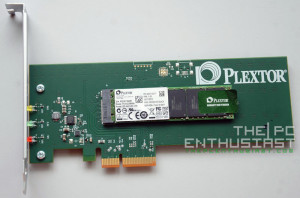 Here we have a closer look at the Plextor M6e. The SSD can be inserted in a PCI-E x4, x8 or x16 slot. There’s is nothing really special about the PCIE add-in card. The real deal is the small rectangular SSD which is attached in the center of the PCB. 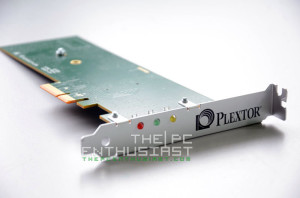 The Plextor M6e, by default is attached to a PCIE adapter and you can remove the SSD in case you want to install it directly to an M.2 NGFF port. The SSD itself it pretty small and I find the PCIE adapter somewhat big. Plextor could have used a smaller adapter instead. 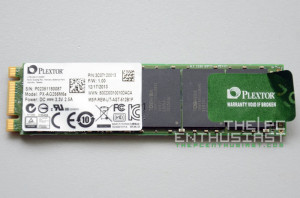 Here we have a closer look at the Plextor M6e SSD. This is an M.2 NGFF SSD and is supposed to be compatible with an M.2 slot found in the new Z97 and H97 motherboards. In the Plextor M6e 256GB model (PX-AG512M6e), Plextor is using 8x Toshiba 19nm Toggle Flash (TH58TEG8DDJBA8C) and a Marvel 88SS9183-BNP2 controller. This particular model is using a 512MB DDR3 buffer. The chip is actually covered by the label sticker.

In testing the Plextor M6e PCIE SSD, I am using a 4th generation Intel Core i7-4770K Haswell processor and an Asus Maximus VI Impact motherboard. The full specifications of the system I used are listed below:

The Plextor M6e 256GB SSD was plugged in a PCIE x16 slot (the only PCIE slot in the Asus Maximus VI Impact) using AHCI (Advance Host Controller Interface) for a better and faster performance. Also while benchmarking the M6e, the drive was not populated with any files, meaning it has a 100% free capacity.

I would also like to add that results may vary depending on the system and PC components used, as well as the benchmarking tools. You may not get the same results compared to my test, or better yet, you might get higher results if you have a better system.

Below is the benchmark result using ATTO Disk benchmark. In my test I got around 565 MB/s write speed and 717 MB/s read speed. These results are definitely better than SATA 6 Gbps-based SSDs. The next test is using HD Tune Pro version 5.50. During the test, the Plextor M6e was not formatted. Rather, I have un-formatted it or deleted the volume since you cannot do the write test if the drive is formatted or is populated with any files. You will get an error message saying “Writing is disabled”. The result was somewhat far from the ATTO benchmark. Maximum read speed was only 518.1MB/s, not to mention it didn’t stay constantly at the speed. And the maximum write speed was only 404.5 MB/s, with an average write speed of 361.5MB/s. 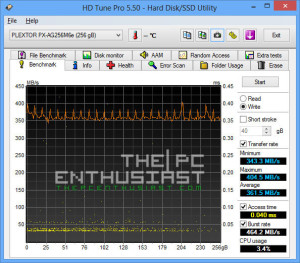 Below are additional test using the File Benchmark test of the HD Tune Pro. Next test is using the CrystalDiskMark 3.0.3. In a 1GB test, I manage to get a sequential read speed of 697MB/s and sequential write speed of 579.6 MB/s. Those are pretty good results already considering that the expected read/write speed is somewhere 770MB/s and 580MB/s for the 256GB model. 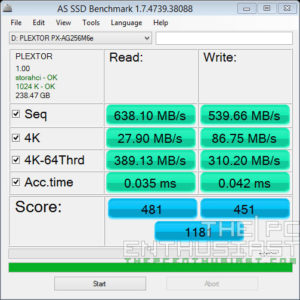 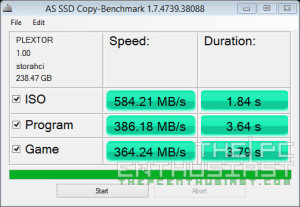 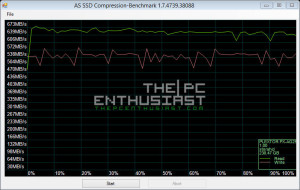 Last but not the least; I used Anvil’s Storage Utilities SSD Benchmark to test the Plextor M6e PCIE SSD 256GB variant. This is a great tool and gives us a more detailed benchmark information compared to CrystalDiskMark and ATTO. The Plextor M6e 256GB SSD got a sequential 4MB read speed of 652.23 MB/s and a sequential 4MB write speed of 546.13 MB/s. I didn’t expect that the result would be similar all throughout the test. But at least the results are close, giving us the idea that its true speed is somewhat is in this range. At the end of the day, the Plextor M6e PCIE 256GB SSD has proven itself to be faster than any 2.5-inch SATA 6Gbps SSD I’ve seen. In most of my test, read speeds are above 600 MB/s and write speeds are above 500 MB/s. These are really good results. However I do feel that the Plextor M6e could still be further improved. Also I haven’t tested the SSD on older system like Z77 or older than the Intel 7 series-based motherboard, or its AMD counterpart. So I can’t guarantee that it will also perform fast with much older systems.

The Plextor M6e is also somewhat pricey at the moment. You can have a SATA III 256GB SSD for half the price (or even more) of the same capacity. Or you could buy two 128GB SSD and put it in RAID 0, which will give you a faster read/write speed than the Plextor M6e. But RAID 0 is not a perfect solution, in fact, it’s a complicated solution, and many don’t feel comfortable doing RAIDs.

In addition, the new Intel 9 series-based motherboards (like the Asus Maximus VII Z97 series) are now available, featuring M.2 ports for Next Generation Form Factor SSDs. This means that, anytime soon, we will be seeing more M.2 NGFF SSD from different manufacturers. And as competition grows, expect that prices will start to fall as well. But don’t expect that to happen by next week or next month. Perhaps a few months from now. Not to mention there’s the SATA Express as well, offering speeds above SATA 6Gbps.

However, if you are looking for a faster than SATA III SSD solution today, the Plextor M6e is definitely an SSD you should consider. Not only does it have a faster read/write speeds, it has also a mean time before failure rate of 2.4 million hours and has passed Plextor’s Zero-Failure Zero-Error standard tests. On top of that the, M6e is backed by a 5 year warranty and support from Plextor. I think this deserves the PC Enthusiast’s Highly Recommended Award.