Last year, we reviewed Samsung’s flagship storage drive, the 980 PRO Gen4 SSD. A few months later, Samsung released a “with heatsink” model that is not only designed for desktop PC use but for the PS5 console as well. It’s the same drive with the same components, except this one comes with a heatsink. The PS5 doesn’t have a (built-in) heatsink for the M.2 drive. So, it’s better to get an SSD with a heatsink if you plan to use this drive on the PS5. Today, let’s check out how the 980 PRO Heatsink performs, and how it compares with the non-heatsink variant and other Gen4 SSDs. Please continue reading our Samsung 980 PRO Heatsink review below.

I can only assume Samsung made the change since they are (primarily) marketing the 980 PRO Heatsink to PS5 owners as well. The 980 PRO is one of the few Gen4 SSD that is compatible with the PS5. Since the first one didn’t come with a heatsink, and the slot for the M.2 drive on the PS5 doesn’t have a heatsink as well, thus we have products like this one.

Samsung also designed the heatsink so that it would fit perfectly in the PS5 without any issue. It measures 80mm in length, 8.6mm in height, and 24mm in width. Other Gen4 SSDs that come with a heatsink, like the MSI Spatium M480 (heatsink model) will not fit inside the PS5 due to the size of the heatsink.

The Samsung 980 Pro SSD series features a new Elpis controller that can process 128 I/O queues simultaneously. It is about four times that of the previous Phoenix controller used in the 970 Pro and EVO Plus.

The new Samsung Elpis controller was manufactured using an “extremely fine” 8nm process. This is to “satisfy modern needs for high performance without compromising power efficiency”. With the new Elpis controller, the Samsung 980 Pro can reach up to 7,000MB/s sequential speed.

The Elpis controller is paired with Samsung’s 6th Gen V-NAND flash chips. The new V-NAND adds around 40% more cells to the previous 9x-layer single-stack structure. Combining both, the Samsung 980 Pro SSD can deliver up to 7,000MB/s sequential read speed and up to 5,100MB/s sequential write speed. Or up to 1,000K IOPS of random read and write (4KB, QD32 Thread16).

Although the 980 PRO is a Gen4 SSD, it is backward compatible with PCIe 3.0 or Gen3 interface. However, expect that speeds will be reduced. Sequential performances are only up to 3500MB/s for reads, and up to 3470MB/s for writes. And Random speeds will only be up to 680K IOPS (2TB) for reads, and 630K IOPS for writes. I don’t recommend that you get a Gen4 SSD, if your motherboard, and CPU, only support Gen3 SSDs.

If you are wondering what’s the difference between the 980 PRO and the 980 PRO with Heatsink, both are basically the same drive. They have the same specifications; same speed; same endurance; the same set of features and the same warranty period.

I tested the Samsung 980 PRO on an AMD X570 system, powered by a Ryzen 7 5800X. The drive was installed on the first M.2 slot. It is the slot that is connected to the CPU, and the slot itself is located just below the CPU socket and right above the first PCIe x16 slot. Below are the rest of the system’s specifications:

I used the included heatsink of the 980 PRO. I didn’t use the heatsink on the Aorus X570s. This is, after all, a review of the heatsink model. I noticed that without a heatsink, Gen4 SSDs tend to run hot and there is some throttling, especially during a prolonged test. So, if ever you plan on getting a Gen4 SSD that doesn’t come with a heatsink, be sure to utilize the motherboard’s heatsink for the M.2 drives, if available.

The 980 PRO Heatsink model performed similarly to the non-heatsink model. I wasn’t expecting that the heatsink model would end up at the top, considering that both SSDs are the same. But the results are consistent and in this test, Samsung’s flagship SSD is not the fastest Gen4 SSD around. 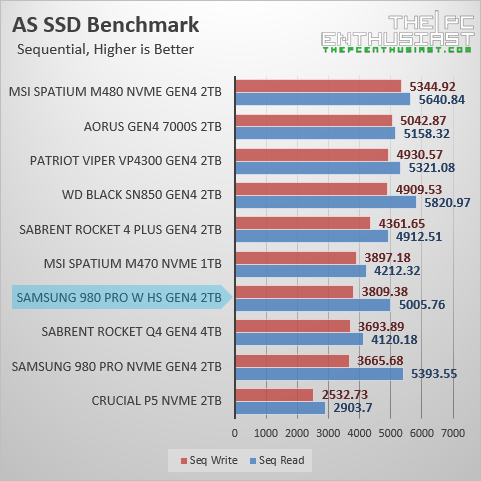 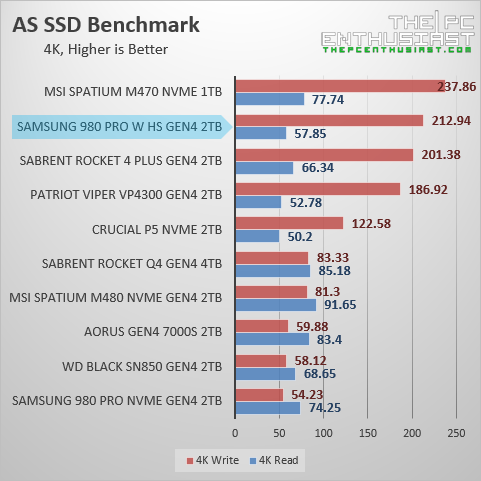 ATTO Disk benchmark is purely a sequential test and we can see that the 980 PRO Heatsink didn’t hit its advertised speed. But it was very close to reaching the 7,00MB/s read and 5,100MB/s write advertised sequential speeds. 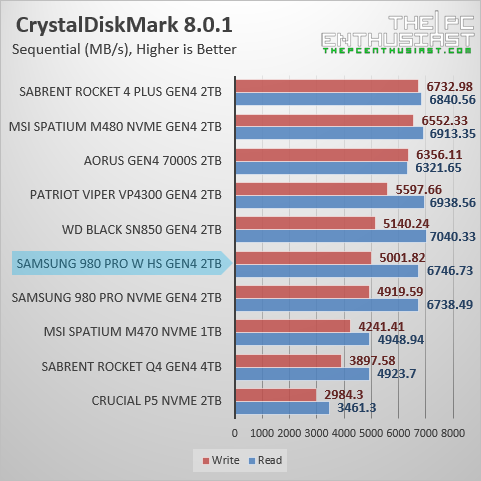 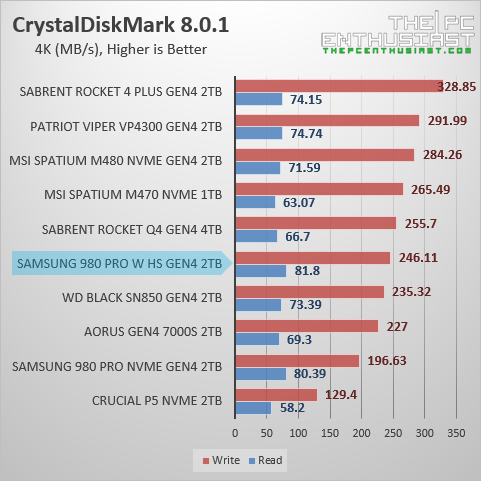 Again, we can see that the heatsink and non-heatsink models performed similarly in CrytalDiskMark’s sequential test. However, the newer heatsink model performs slightly better on the 4K random test. Both the 980 PROs’ performance is in the middle of the stack in this test as well.

Finally, I tested the Samsung 980 Pro Heatsink model using the PCMark 10 Full System drive benchmark suite. It is an intensive test and takes about an hour (or more) to finish. The test uses a wide-ranging set of real-world traces from popular applications (Adobe Creative Suite, Microsoft Office), and common tasks to fully test the performance of modern drives.

Interestingly, the 980 PRO performed quite well in this test. The heatsink version got a full system drive score of 2715, which is just around 200 points lower than the VP4300 and SN850. The VP4300 uses the new InnoGrit controller for Gen4 SSDs, while the SN850 uses an in-house WD G2 controller. The bandwidth speed is not bad as well, getting around 429MB/s, a few megabytes faster than the non-heatsink model. It may not be the fastest, but the 980 PRO is still at the top of the chart.

The Samsung 980 PRO SSD Heatsink model is available in the market for several months now. Its original retail price was around $249.99 for the 1TB and $449.99 for the 2TB capacity. I’m positive that prices have gone down by now. Usually, SSD prices tend to go down after being available in the market for quite some time. For the latest pricing and availability, kindly follow the links below.

Just like the no heatsink model, the Samsung 980 PRO Heatsink performed well overall. I’m not sure if the heatsink version came with a newer or updated firmware version that made it perform slightly better than the older no heatsink model.

Perhaps it came with newer firmware since I also tested the 980 PRO with the motherboard’s heatsink installed. So, in theory, both should be equally performing. But as we can see, the 980 PRO heatsink is slightly faster. However, in the real world use, you don’t really see or feel the difference at all.

Samsung used to have the fastest drive around. But as we see on our benchmark results, there are other and newer drives that challenge Samsung’s flagship SSD. I guess Samsung needs to step up to regain its throne as having the fastest SSD in the market. Nevertheless, it is still one of the fastest drives available. Not to mention Samsung SSDs have a good track record.

For PS5 users, the Samsung 980 PRO heatsink is a great drive to expand and speed up the console. For PC and desktop users, we have the option to go with the non-heatsink model or the heatsink model. It is up to you which one to use depending on your scenario.

Samsung usually marks down the prices of their SSDs, so if ever you spot the 980 PRO with a good deal or better price than the competition, you might want to take advantage of the discounted price. It’s not only fast, but Samsung has the advantage when it comes to pricing and excellent software as well.