With the release of GeForce RTX 30 series Founders Edition cards, NVIDIA used a new 16-pin PCIe power connector. Now it is expected that the next generation graphics cards (RTX 40 Series) will use the new PCIe 5.0 connector and will slowly move away from the usual 8-pin PCIe power connector. It looks like the SilverStone HELA 850R Platinum is the first ATX 3.0 and PCIe 5.0 with a dedicated 12VHPWR connector you can buy right now. It currently retails for around $215 and you can get one from Amazon.com here. If you’re building a new system or gaming PC from scratch, and you plan to upgrade or buy the next generation RTX 40 series graphics cards, then you might want to invest in a PSU that is ATX 3.0 and PCIe 5.0 ready.

The SilverStone HELA 850R Platinum is a full modular PSU with flexible black flat cables and all Japanese electrolytic capacitors. Interestingly, you won’t see an “80 Plus Platinum” certification on this PSU. Instead, the HELA 850R is a Cybernetics Platinum-certified power supply.

It is an ATX 3.0 and PCIe 5.0 PSU with a dedicated 16-pin 12VHPWER PCIe connector for high-performance graphics cards like the upcoming NVIDIA GeForce RTX 40 series GPUs. According to SilverStone, “the 16-pin (12VHPWR) design is capable of withstanding power failure caused by a running graphics card’s instantaneous peak power consumption, whilst providing higher stability and efficiency power output for high-end systems”.

The HELA 850R Platinum has a built-in 135mm low-noise FDB fan to cool the PSU. It also features several advanced protections like over current protection, over power, over voltage, under voltage, over temperature, and short circuit protections.

You can check out more details from the specifications table below.

The SilverStone HELA 850R Platinum is now available and currently retails for $215. You can check its latest pricing and availability on Amazon.com here. 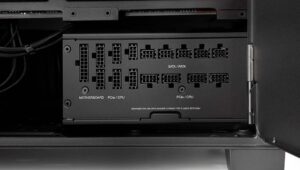