A memory or the DRAM is one important component of a PC. Without it, your computer will not run at all. The need for a fast and highly reliable, but affordable DDR3 memory has been growing since. Team Group is a company who specializes in manufacturing memory modules, and they have a long track record that proves the quality of their product. Today, let’s take a look at one of their flagship overclocking memory module – the Team Xtreem LV 8GB DDR3 2400 CL10 (TXWD38G2400HC10QDC01). This particular memory is overclockable, thanks to the high quality chips that Team is using; supports XMP profile and is designed to meet the needs of a PC Enthusiast, hardcore PC Gamers or a seasoned multimedia content creator/editor. Let’s find out more about Team Group’s overclockable memory modules in my Xtreem LV 8GB DDR3 2400 review below. It features a thick and tall aluminum heat spreader that comes in either Black or White. Team has also applied the 24-hour burn-in test and industry-approved MemTest software to perform the OQC inspection of all modules to ensure optimal performance and assure the stability and quality before being ship to retail stores.

Team is also using SKhynix H5TQ4G83MFR memory chips and has the following set of features:

Below is a screenshot of the SPD information of the Xtreem LV 8GB DDR3 2400 from AIDA64: 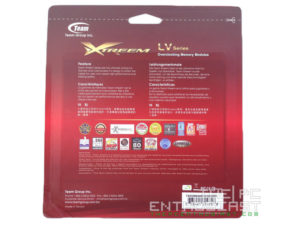 The Team Xtreem LV DDR3 2400 8GB kit comes in a nice small packaging. You can see the memory modules thanks to its transparent plastic cover. The package includes 2x 4GB (8GB) memory modules and an installation manual. The Xtreem LV DDR3 2400 measures 133.35mm x 52.3mm including its heat spreader. Make sure that your CPU cooler doesn’t get in the heat spreader’s way, specially if you are using a large CPU cooler, like the Noctua NH-D14. 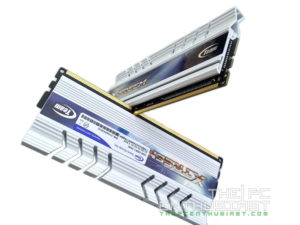 It has a conventional 8-layered PCB design and is covered with the X-mark heat-sink labeled for the Xtreem series. Team has also added a groove to the heat-sink for power users to install fans on top to enhance ventilation. 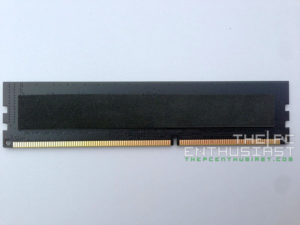 A single 4GB stick has 8x SKhynix H5TQ4G83MFR memory chips. It’s a single sided module since it’s only 4GB capacity, while the 8GB capacity uses both sides. There is a padding on the other side (right photo) to fill the space between the PCB and heat spreader. 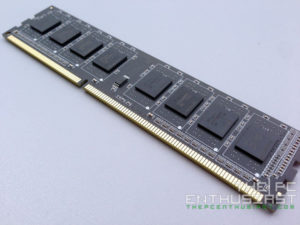 When I removed its heat spreader and saw the SKHynix memory chips soldered on its PCB, I already have an idea that this memory module is going to perform well. SKhynix chips are popular specially in high end components.

In testing the Team Xtreem LV 8GB DDR3 2400 memory modules, I am using a new motherboard from Gigabyte, powered by a 4th generation Intel Core i7-4770K Haswell processor. The full specifications of the system I used are indicated below: 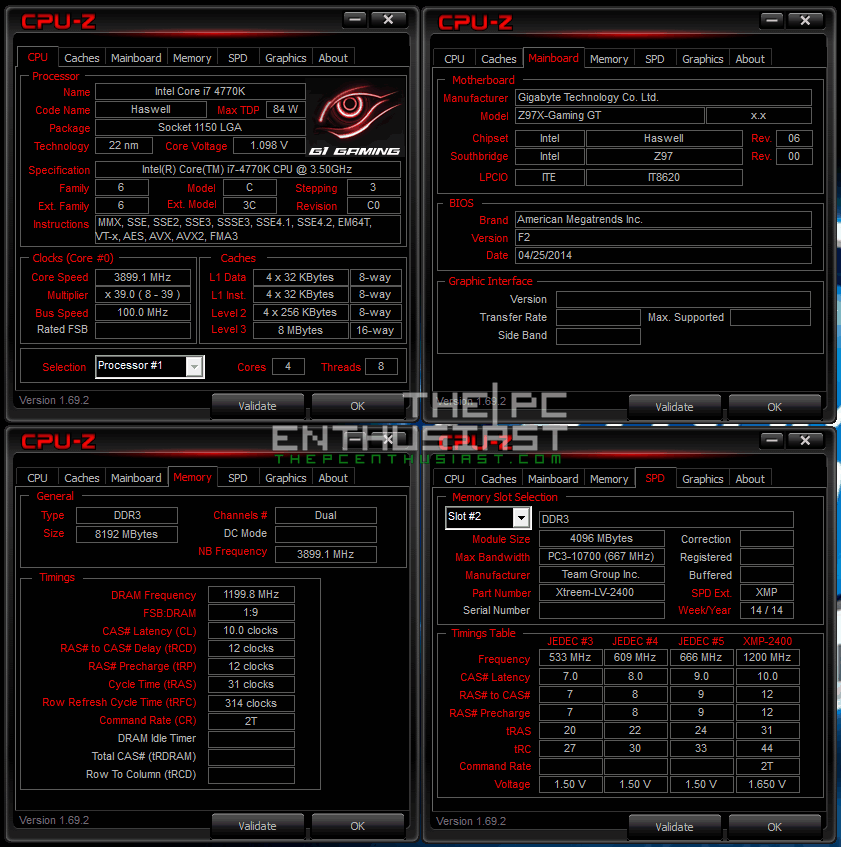 In benchmarking the Team Xtreem LV 8GB DDR3-2400, I tested it using its XPM profile. Everything from the motherboard’s BIOS settings are set to default or Auto. The screenshot above shows the memory’s clock speed, timings and the CPU’s clock speed as well. At 2400MHz, it has memory timings of 10-12-12-31-44:2T, while the CPU is running at 100% Turbo Speed (3.9GHz). I’m no overclocking guru or master (yet), but I was able to push its clock frequency to 2600MHz easily. It has a memory timings of 11-13-13-35:2T with a FSB:DRAM ration of 1:13. I haven’t tweaked its memory timings so I’m pretty sure seasoned overclockers can still fine tune its timings. But for PC Gamers and users, using the XMP profile and setting it to 2400MHz is very much enough. Setting the Team Xtreem LV DDR3 memory to its native clock speed, which is 2400MHz, seems to yield the best performance. But since this is an overclockable memory, you can still increase its clock speed. By overclocking it further, it can show improvement specially if you are very familiar when it comes to overclocking a memory. For the Read, Write and Copy speed higher MB/s is better, while lower latency is better. 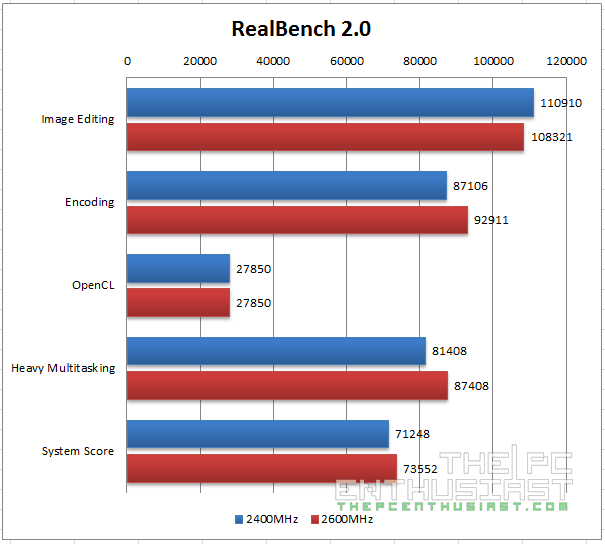 The Asus RealBench 2.0 runs several task to benchmark the system, from image editing, encoding, OpenCL related task and heavy multitasking. Although this seems like a synthetic benchmark, RealBench 2.0 will actually open several images and edit them, do rendering and run several things altogether. Again, increasing the memory frequency resulted in a better performance. A lot of PC Gamers, specially those who are new to DDR3 memory, do not understand or do not realize the benefit of a DDR3 memory that comes with a higher clock speed. A DDR3-2400MHz is very much likely to give a better overall better gaming experience compared to a DDR3 memory that comes with lower clock speed like 1200MHz or 800MHz. The difference might not be noticeable or it’s not that huge, since there are other factors that are involved in gaming situations, like the graphics card.

At the time of posting this review, the Team Xtreem LV DDR3 2400 CL 10 8GB Kit is currently priced at $84.99 only. Meanwhile, the 2x 8GB (16GB kit) is priced at $168.99. Depending on the retailer, there might be a very slight difference in the price of the Black heat spreader compared to the White one.

For gaming, an 8GB would be sufficient in a 64-bit operating system. But the 16GB is the recommended one in most cases. However, if you are into heavy multitasking, building for a workstation system, server type, multimedia (video/photo) and 3D creation, a 32GB or up is recommended.

My first high end memory was a Team Xtreem DDR2 memory many years ago. During that time, Team’s memory modules are of the highest quality, very stable, performs great, not to mention they are also popular with the enthusiast community as well. Now, with their current Xtreem LV DDR3 modules, their memory modules still carries that same great quality if not better.

It has a nice large heatspreader for cooling the SK Hynix chips. Although, I am not a fan of their heat spreader design. I think they can still improve the design and the paint job as well. But that’s just purely my personal preference. If you are using a large CPU cooler with a large heatsink, the heatspreader might get in the way. So make sure that your CPU cooler is compatible with memory modules with large heatspreaders. The black PCB of the newer Xtreem LV DDR3 2400 memory is also a plus factor in terms of aesthetics.

At default JEDEC 1333MHz frequency, the system runs overall good, but fully utilizing its 2400MHz speed offers a boost in the overall performance of the system, not only in gaming and desktop operation, but also in multimedia editing and content creation as well. Most people tend to forget to set the memory using its XMP profile. As a result, they are not getting the optimal speed that they should have, in this case 2400MHz. So be sure to use the XMP profile, or at least set it to 2400MHz if you are not comfortable using XMP profiles.

The Team Xtreem LV DDR3 2400 memory is fully overclockable thanks to the high quality SK Hynix chips. The only thing that prevented the Xtreem from going way beyond its 2400MHz frequency is my overclocking skills. I’m very sure seasoned overclockers and PC Enthusiasts who are already masters in terms of overclocking processors and memory can push the Xtreem LV higher than its rated speed with better set of timings.

PC Gamers would also find the Xtreem LV memory to be a good investment. Not only that the high 2400MHz memory speed will provide an overall better gaming experience compared to memory with lower speeds, but since this is LV or Low Voltage series, the memory could also run on lower voltages as well. This memory is not only designed for enthusiasts and overclockers, but for PC gamers as well.

After using the Team Xtreem LV 8GB DDR3 2400 CL10 for several weeks, I’m very happy and satisfied with its performance. Team’s memory didn’t fail me just like many years ago. If you are looking for a high performance and overclockable memory module, you might want to consider this memory as well. Aside from the stable and solid performance, it is also back with a life time warranty, and I think it deserves the PC Enthusiast’s Highly Recommended Award.