Today we are going to check out an M.2 SSD enclosure – the Yottamaster MS3 M.2 NVMe SSD Enclosure. As the name of the product suggests, the MS3 is an external portable enclosure for M.2 NVMe SSDs. It offers 10Gbps of bandwidth and the unique thing about this M.2 enclosure is that it features an active cooling solution and a digital temperature display. So, if you are in the market for an M.2 enclosure and you want to keep things running cool; check out our Yottamaster MS3 review below.

The Yottamaster MS3 is part of the company’s “Y-Master Series”, which is targeted towards gamers. Although, it doesn’t necessarily mean you can use these products outside of gaming use. The MS3 features JMS583 from JMicron, offering speeds of up to 10Gbps. Yottamaster claims that the MS3 is capable of read/write speeds of up to 988MB/s, and supports USB Attached SCSI Protocol (UASP).

For those who are unfamiliar with the JMS583, it is a bridge chip that can turn a PCIe/NVMe product into a USB product. JMicron’s embedded USB to NVMe data translation technology can create an external device to achieve more than 1000MB/s in performance. It is the industry’s first chip to fully saturate the USB 3.1 Gen2 10Gbps bandwidth.

Aside from PC, the Yottamaster MS3 is compatible with various devices like PS3, Xbox One S, Sony PS4, PS4 Slim, PS4 Pro, mobile phones, and even routers with USB ports. Basically, it becomes similar to an external storage device; except that you get to choose what M.2 NVMe SSD is installed inside.

Like most portable SSDs, like the SanDisk Extreme (PRO) we reviewed before, the Yottamaster MS3 M.2 enclosure doesn’t need additional drivers. It’s plug-and-play and doesn’t require extra or external power. It also supports M.2 in different form factors, namely 2230/2242/2260/2280. You can install up to 2TB of M.2 NVMe SSD capacity. Note that the MS3 is only compatible with M.2 NVME SSD, and it is not compatible with an M.2 SATA SSD.

Now, let’s take a closer look at the product itself as I discuss more of its features.

The Yottamaster M.2 NVMe SSD enclosure came in a small box with a sliding sleeve for its cover. You can see some of the highlighted features of the MS3 on the front portion. While at the back, you can see the enclosure’s specifications as well as information regarding the company.

The package includes a USB Type-A to Type-C cable, as well as Type-C to Type-C cable. There’s also a thermal pad, a Phillips screwdriver, an extra screw and “locks” for the M.2 drive, and a user manual. All the things that you need to use the enclosure already are included.

Unlike other M.2 SSD enclosures, the Yottamaster MS3 is a bit wider. Its body is made of aluminum; measures 104mm in length, 59mm in width and 16mm in height. It also weighs around 170 grams.

Nothing to see or comment on at the back, but I have to warn you a bit regarding that embossed logo at the front. The edges are a bit sharp, especially the pointy sides. It is best to avoid touching that area. I guess you can pile it down a bit, but Yottamaster should have pile it down before shipping these enclosures out.

To open the Yottamaster MS3 M.2 NVMe SSD enclosure, simply unscrew the single screw on the other side and slide the top (or bottom) piece sideways. It’s that easy to open, and what you’ll see inside is similar to the photo above. The bottom portion is just a piece of aluminum, while most of the components and circuitry are on the top side.

Installing an M.2 SSD Is as Easy as ABC

Above you can see the M.2 slot for the NVMe SSD, and on the right-hand photo, you can see the plastic “lock” for the drive. I love the design since from here it’s toolless. You only need to insert the M.2 drive in the slot, push the drive down gently, and lock it in using that “lock” or plastic tab. There is no need to screw the drive unlike in other M.2 enclosures.

You can see from the photo on the left-hand side, I have installed a Kingston KC2500 NVMe SSD for demonstration. Now, the last NAND flash chip of the SSD may get in the way of the lock. But you don’t need to fully position it at the center to hold the SSD down.

The second photo on the right-hand side is the fan of the MS3. Impressively, the fan runs silently. I don’t think it runs at a very high RPM. Perhaps it spins just fast enough to suck cool air in and push the hot air out. I don’t have a photo of the digital temperature display from the inside since it is covered by a layer, but it is seated next to the fan.

The Yottamaster MS3 has a (limited) speed of up to 10Gbps. That’s also the limit of the USB 3.2 Gen2x1 interface (previously known as USB 3.1 Gen 2). For this review, I am using a Crucial P2 M.2 2TB capacity. It is a DRAM-less entry-level NVMe SSD featuring a Phison E13T controller. It offers a sequential read speed of up to 2,400MB/s and a sequential write speed of 1,800MB/s.

Also, it is expected that we are not going to max out or even get close to the maximum potential speed of the Crucial P2. But I am expecting that it should be able to get around 1,000MB/s of sequential read/write speed. It is also important that the MS3 be connected to a USB 3.2 Gen2 10Gbps port and use the USB-C cable. Otherwise, the speed will be limited to whatever bandwidth the interface is capable of.

Check out the table below for the various USB types and their respective speed.

Note that connecting the Yottamaster MS3 to a Thunderbolt 3 or 4 doesn’t make the transfer speed go faster. 10Gbps is the limit of the enclosure’s controller. And you also need to connect it to a 10Gbps USB port to take advantage of its maximum potential speed.

For comparison, I added the Crucial P2’s benchmark results when it is directly installed on a motherboard. I also added the SanDisk Extreme Portable SSD V2. It is a portable SSD drive that offers speeds of up to 1,000MB/s sequential read/write. And finally, there is a SATA SSD as well as a high-performance NVMe SSD, just to give more perspective.

AJA system test uses video files to test the read and write speed of the drive; it’s mostly sequential. And as you can see from the results above, the maximum potential speed of the Crucial P2 was reduced to half. This is because we are limited to 10Gbps of bandwidth.

However, the read and write speeds are more than 950MB/s and near the limit of 1,000MB/s. That’s a good thing since we are almost maximizing the potential speed of the MS3 enclosure. Notice also that it is slightly faster than the SanDisk Extreme Portable SSD V2 that has a similar advertised speed. 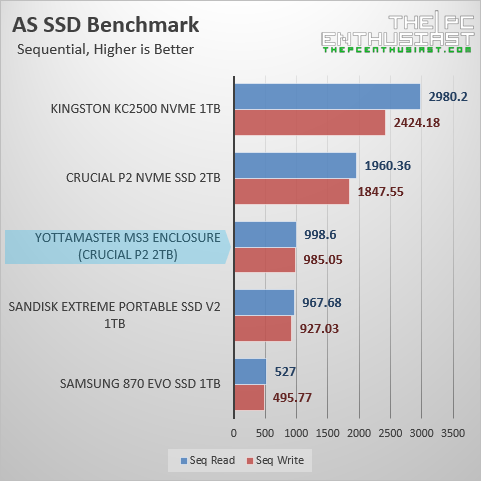 In AS SSD benchmark, the results are somewhat similar. The Yottamaster MS3, with a Crucial P2 installed, is very near the 1,000MB/s limit. Expect to get a similar result even if you use a faster M.2 NVMe SSD, like the Kingston KC2500.

Nevertheless, the Yottamaster MS3 with a Crucial P2 remains a bit faster than the SanDisk Extreme Portable SSD V2 in this test.

In the ATTO Disk benchmark we can see the maximum speed a storage drive can achieve. Again, the MS3 was able to achieve its advertised speed in this test. 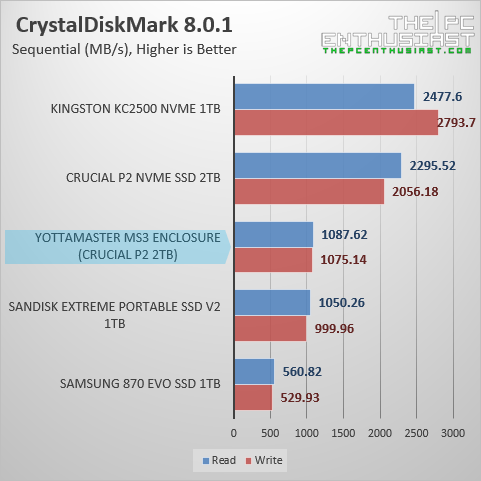 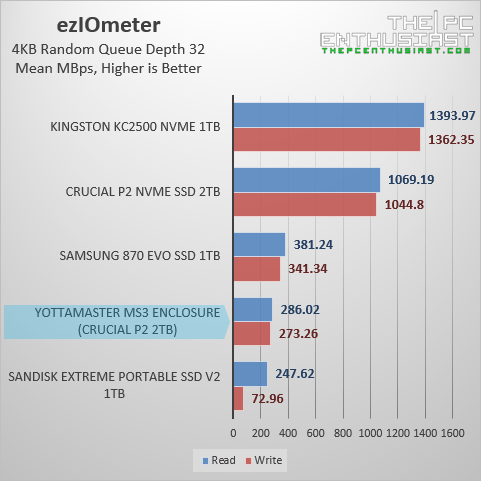 In CrystalDiskMark and ezIOmeter benchmarks, we can see similar results and patterns from the other benchmark tests. The P2’s performance is reduced to the MS3’s speed limit. But it remained slightly faster than the Portable SSD V2, generally speaking. However, depending on what is more useful, beneficial, or cost-effective setup is entirely up to the user. Allow me to break it down for you.

The advantage of getting a portable SSD, like the one from SanDisk, is it is more likely to be the cheaper option. You also don’t need to install or thinker with the drive itself. And it’s basically plug and play right out of the box. Some manufacturers offer security software, where you can add a password and lock the drive. SanDisk’s portable SSDs have one.

On the flip side, with an M.2 NVMe SSD enclosure, you get to choose what SSD is installed inside. If ever that SSD fails, you can replace it with another one. Unlike with portable drives, you can’t replace the SSD inside it.

Also, depending on what drive you pair with the MS3, it may not be as cost-effective as simply buying a portable drive. But you do get the benefit of being able to (re)use the enclosure. Not to mention, the Yottamaster MS3 has an active cooling solution and a temperature display. So, basically, it boils down to one’s usage and preference.

The Yottamaster M.2 NVMe SSD enclosure MS3 model is now available. At the time I published this review, it comes with a retail price of $59.99 for the cooling fan with a temperature display. Meanwhile, there is the MS2 enclosure that doesn’t have a temperature display but has active cooling. The MS2 is currently priced at $55.99. That’s only a $4 difference, so I’d get the MS3 instead. For the latest pricing and availability of the MS3, kindly check out the link below.

At the end of the day, I think the Yottamaster MS3 is a good M.2 NVMe SSD enclosure. It’s easy to use, plug and play, and installing an M.2 SSD is a breeze. 10Gbps is fast, but it is definitely not the fastest. Most of the M.2 enclosure in the market offers 10Gbps of bandwidth. But the unique thing about the MS3 is that it has an active cooling fan and a temperature display.

Most of the (mainstream) motherboards today have USB 3.2 Gen2 10Gbps ports. That’s why many of the enclosures are limited to this speed. The newer Z590 motherboards have native support for USB 3.2 Gen2x2 20Gbps and some even offer Thunderbolt 4 (USB4) connectivity. If you are looking for an M.2 NVMe enclosure that offers faster speed, there are a few. And we’ll be checking out the Yottamaster SO3-C4 as well (review here).

The Yottamaster MS3 was able to achieve its advertised speed. So, I don’t have anything negative to report regarding its performance. It is also built quite well, thanks to its solid aluminum body. However, I do have a couple of things to nitpick about and hopefully, Yottamaster would address this in their future versions/variants.

The edges on the logo at the front portion are sharp. They need to pile it down to avoid accidental cuts or scratches. And I hope manufacturers, not only Yottamaster, would include a longer USB cable. Finally, the Yottamaster MS3 is an excellent M.2 NVMe SSD enclosure, and it’s worthy to be included in your top list.