A few days after the announcement of the NVIDIA GeForce GTX 1080, Zotac was the first to announce their GTX 1080 Founders Edition featuring the reference design of the said GPU. Now, custom design GTX 1080 are starting to surface and recently the Zotac GeForce GTX 1080 PGF Edition was teased. It seems that Zotac won’t be using the brand “AMP!” anymore (not sure yet) and they are introducing a new brand for their GTX 100 series cards – the PGF Edition or Prime Gamer Force. I expect that the PGF edition will have (significant) faster clock speeds than the Founders Edition. On top of that, the new Zotac GTX 1080 PGF graphics card features RGB lighting effect, not only on Zotac’s logo, but this time on the back plate as well. Here we have a first look of what the new Zotac GeForce GTX 1000 series graphics card would look like, under the new branding PGF Edition or Prime Gamer Force. As you can see from the photo, the new Zotac GTX 1080 PGF features a custom PCB with a massive cooler. The rear end of the cooler looks similar with the Zotac GTX 970 AMP! Extreme Core Edition, and has five copper heat pipes. It’s hard to tell if the cooler shroud will look the same or not. But I am guessing that it will feature a new custom cooler shroud design. Looking at the backplate, you can see that it features RGB illumination with various lighting effects (based on the new FireStorm options below). The backplate looks like a combination of metal and acrylic design, including the Zotac logo on the side portion.

It also looks like that the new Zotac GTX 1080 PGF Edition will have an 8+6pin or 8+8pin power connector, instead of the reference 8-pin connector. You can also see an OC+ module on the rear end and Zotac’s Power Boost on the middle portion. I’m expecting that the clock speed would be around at least 2000MHz or even more.

Zotac’s previous GTX 900 series graphics cards were one of the fastest graphics cards available. Even their Zotac GTX 980 Ti AMP! Edition was very impressive. I’m sure the new GTX 1080 PGF Edition would be much more impressive than the previous one.

The Zotac GeForce GTX 1080 PGF Edition’s specs are unknown yet at this time, as well as its retail price.

Aside from the Zotac GTX 1080 PGF Edition, the company has also upgraded or overhauled their FireStorm utility. The new FireStorm v1.0.46 definitely looks better than the old one and has more functions built into it. You can now check/control each card that is in SLI configuration. Aside from the advance settings, there is the Z-ELVES preset and you can also control the LED light effect on the Zotac GTX 1080/1070 PGF graphics cards. 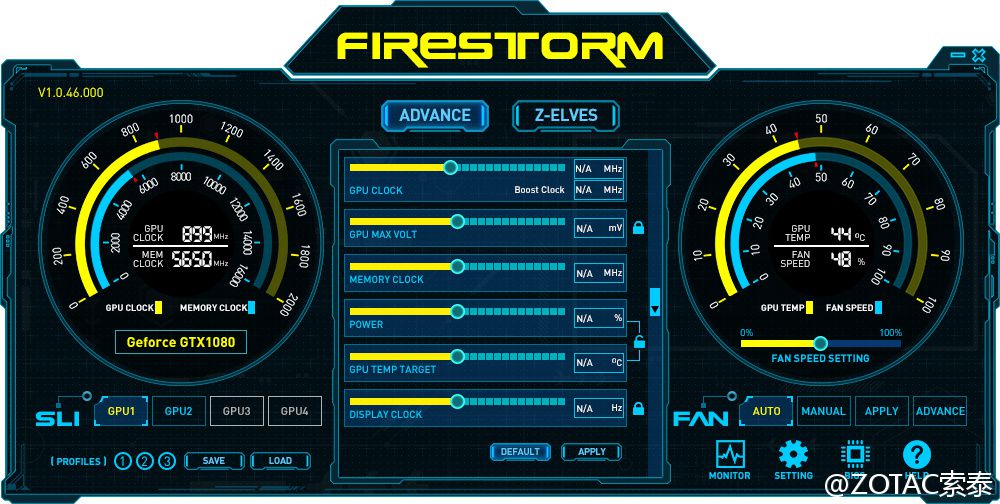