AMD has finally announced their 7th generation APU and new AM4 platform, offering higher clock speeds and lower TDP. But don’t get too excited yet guys since the first wave will be for OEMs, but it won’t be long until the new APUs and AM4 platform for enthusiasts and system builders will be released as well. The 7th gen. AMD A12-9800 leads the pack of 8 APUs in total, featuring 4 cores clocked at 4.2GHz max frequency, with an integrated Radeon R7 graphics processor and a thermal design power of only 65W. Meanwhile, the new AM4 platform brings support for DDR4 memory, latest I/O standards and will support the upcoming Zen processor. The upcoming 7th generation AMD A-Series processors or APUs and AMD’s new AM4 socket are scheduled to ship at the second half of 2016. OEMs, like HP and Lenovo, will be the first one to offer this new technology. The 7th gen. AMD APUs and AM4 platform will support DDR4 memory which will give additional bandwidth for gaming, and also introduces lower power consumption. Their flagship APU, which is the AMD A12-9800 will feature 4 cores clocked at 3.8GHz base and 4.2GHz max features 65W TDP and integrated Radeon R7 graphics. The A12-9800 will combat Intel’s Core i5-6500 offering slightly higher performance in compute performance and significant performance difference in the graphics department. 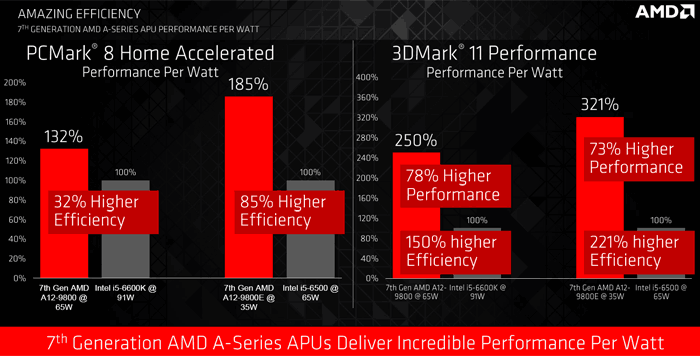 Meanwhile, the new AMD AM4 platform will support the 7th gen APUs including Zen and future next-gen processors. The new AM4 will also support DDR4, PCIe Gen 3, USB 3.1, NVMe and SATA Express connection. Yeah, it may sound that AMD is a little bit late to the party since Intel has been offering all these connectivity options since last year with their 100 series and X99 platforms, but it’s never too late for AMD and we are excited to see what their high performance Summit Ridge processor based on the new Zen architecture can do. For now, OEMs will be the first to release this new technology from AMD, and enthusiasts and system builders will have to wait until early next year for the really good stuff from AMD.