Zotac recently announced their Steam Machine dubbed as the NEN SN970. The Zotac NEN Steam Machine is powered with the latest 6th gen Intel Core i5-6400T quad core Skylake processor, paired with an NVIDIA GeForce GTX 960 discrete graphics card. It comes with a pre-installed SteamOS and you also get one Steam controller. There is one thing that I am confused about this unit. The GeForce GTX 960 is not running on a 192 bit interface, instead it has 128-bit. Probably the discrete GPU used here is a rebadge of the GeForce GTX 970M. Anyway find out more about the new Zotac NEN Steam Machine from the official news below. 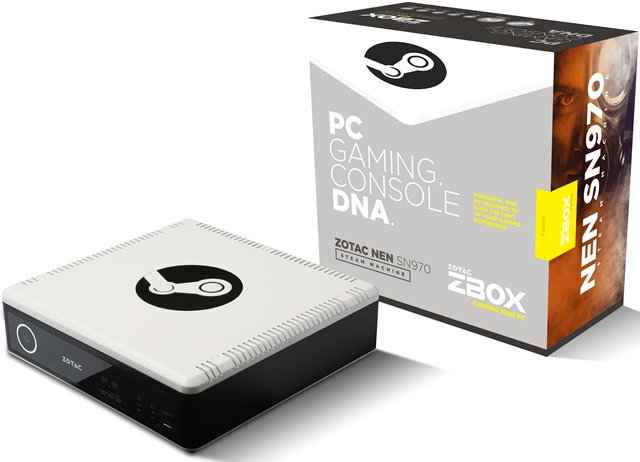 ZOTAC International, a global innovator and manufacturer of graphics card and ZBOX Mini PCs, makes the case for small form factor gaming with NEN, the most powerful small form Steam Machine. ZOTAC taps into NEN to draw out a truly powerful Steam Machine with minimalism, portability, and an all new design for a new way to game.

ZOTAC, the original Mini PC manufacturer, has been producing Mini PCs since 2008 and are continuing to innovate with more power, higher efficiency and smaller size. With the recent release of the MAGNUS, the most powerful small form barebones Gaming Mini PC, ZOTAC is pushing their momentum forward to unleash an even more potent machine. PC Gaming. Console DNA.
The Zotac ZBOX NEN Steam Machine has the ability to tap into your innate aura, hone it, and utilize it to further yourself. ZOTAC has laid the groundwork for the NEN Steam Machine with the power, dormant and waiting. NEN is not simply a PC turned Steam Machine. It is engineered from the ground up to game with the mechanics of the PC fused with the genetics of console to be the most powerful small form Steam Machine. Game with pure brute of PC with a 6th gen Intel quad-core Skylake processor and NVIDIA GeForce GTX graphics hardware, and play with the precision of a console with the all new bundled Steam Controller. Hardware of the future, here today in the form of NEN. Size, sound, acoustics, and lighting are all very important for a system that will anchor as the home entertainment center. ZOTAC engineers shrank all the functionalities and power to a mere height of two inches to ensure it fits neatly into the entertainment center while maintaining whisper quiet levels at maximum cooling performance utilizing dual radial coolers. It also features the ability to disable the power on LED so it will be just you and the game; an almost impossible feat of engineering just a few years ago.

SteamOS
Power on to a whole new way to play with SteamOS. Pre-installed and ready to go, log into your existing Steam account or create one to access thousands of games* (*games not included and internet connection required) and connect with millions of gamers. SteamOS will only display compatible games to ensure an optimal Steam experience. With a 1TB hard drive pre-installed, you can ensure you’ll be able to load all your favorite games with room to expand with an available M.2 SATA SSD slot. It’s the same Steam experience millions of gamers enjoy every day, now optimized and at your fingertips. Experience a new way to play with the most powerful small form NEN Steam Machine. Tap into NEN.

Zotac hasn’t included the manufacturer’s suggested retail price for the ZBOX NEN Steam Machine SN970 in their official news. But based on the price of a similar product, the ZBOX MAGNUS EN970, it might be priced under $900 as well.