The era of the DDR4 memory is upon us, now that Intel has released the new X99 chipset and the new Intel Haswell-E processors for High-End Desktop platform. The new DDR4 memory modules are significantly faster, not to mention more expensive as well, compared to the currently DDR3 memory modules. It looks like we won’t be seeing the DDR4 memory in mainstream computers any time soon, probably a year from now (or more), so basically it’s exclusive for X99 systems for now. Not only does the new DDR4 memory is faster but it also comes with a slightly different PCB design. Today we are going to look at the Kingston HyperX Predator DDR4 3000MHz 16GB (4x4GB) Quad Channel kit, the company’s first high performance DDR4 memory module. Find out how fast is the new HyperX Predator DDR4 in my review below. 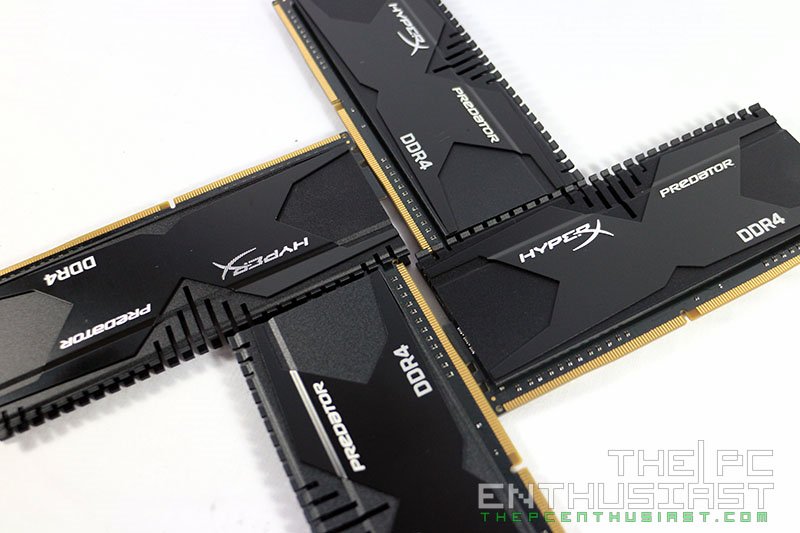 The Kingston HyperX Predator DDR4-3000 16GB (HX430C15PB2K4/16) is a kit of four 4GB DDR4-3000 CL15 SDRAM. It is based on 8x 512M x 8-bit FBGA components per module. Each sticks in the kit supports Intel Extreme Memory Profile 2.0 or commonly known as Intel XMP 2.0. With the XMP profile you can easily configure the memory to run at its maximum optimal speed via the BIOS configuration.

The JEDEC standard electrical and mechanical specifications of the Kingston HyperX Predator DDR4 are as follows:

Below you can see how AIDA64 sees the memory module. Notice that it didn’t reflect the DDR4-3000 Intel XMP profile. Instead it’s showing a DDR4-2700 configuration. Not really sure why, perhaps the AIDA64 Engineer I used needs to be updated. Another feature that I like about the HyperX Predator DDR4 memory is that it has built in thermal sensors, making it possible to monitor its temperature.

Below are more features of the Kingston HyperX Predator DDR4 memory module:

Physical Dimension and Layout of the Memory’s PCB: Kingston is using the same heatsink design from the previous Predator DDR3 memory, except that this time it comes in an all-black color. The all black theme looks really nice, but in my opinion the company could have at least made some few changes on the heatsink design to separate it from its predecessor.

I didn’t take photos of its packaging since this is a pre-production sample, and I don’t think that the plain box that it came with is its final retail packaging. I also haven’t removed the heat sink from the PCB so I am not sure if the company is still using a SKHynix memory. Or if they did, I can’t tell which SKHynix memory chip are they using. Nevertheless, knowing Kingston, they don’t use mediocre memory chips on their high performance components.

In testing the Kingston HyperX Predator 16GB DDR4-3000 memory kit, I used Asus’ X99 Deluxe motherboard powered with an Intel Core i7-5930K Haswell-E processor. The full specifications of the system I used are listed below: Below are the benchmark results I got with the Kingston HyperX Predator DDR4 16GB. Both are using Intel XMP Profiles 1 and 2, or 2666MHz and 3000MHz. Games don’t seem to benefit that much when increasing the clock speed from 2666MHz and 3000MHz. But still, the 3000MHz does have some performance advantage over the 2666MHz clock speed. So be sure to set the memory to its highest optimal speed if ever you get one of this.

I wasn’t able to overclock the Predator DDR4 beyond the 3000MHz speed. I did try to push it a little bit higher but the system won’t just load. I’m not sure if I missed something or if the pre-production samples are not yet fined tuned. Remember, the final retail DDR4 Predators will have a much lower operating voltages of 1.35v for the 3000MHz.

Kingston’s new and high performance DDR4 memory modules are plain great. They are super-fast and it created a significant gap between the DDR3 and DDR4 memory. Generally speaking the 3000MHZ clock speed resulted in a tad higher performance difference. But there are times where the 2666MHz seems to be the optimal setting. If you check out the benchmark results from the CineBench R15, RealBench Image Editing, 3DMark Benchmark, and Final Fantasy XIV Benchmark, the 2666MHz got a slightly higher score compared to the 3000MHz. This is probably due to the fact that the 2666MHz comes with better or tighter timings. Aesthetically speaking, the company didn’t change the heatsink design of the Predator DDR4, which in my opinion they should have at least change it a little bit. But the all black heatsink design does look good compared to the DDR3 Predator.