The images below (not the actual benchmark setup) show how the graphics card looks like with its LED lighting effect. You can only choose 7 colors and several lighting effects. Look at the single photo below and notice what I have encircled in red. The GTX 1080 Ti AMP has an onboard MCU module that is also present on the AMP Extreme and ArcticStorm Editions. The MCU does all the processing for the Spectra LED lighting effect; as well as providing better temperature monitoring and helps control FREEZE (fan stop feature). The blue LED light simply indicates that the graphics card is healthy and active. While this is a nice feature, I do find the location of the blue LED a little bit off. 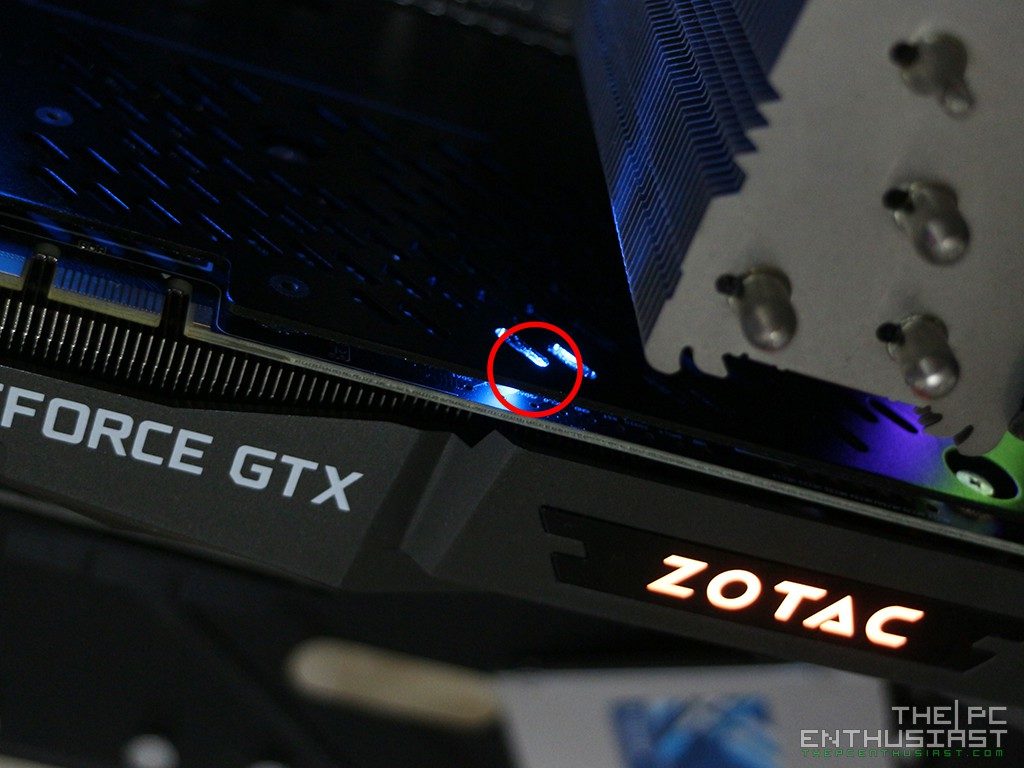 In benchmarking the Zotac GeForce GTX 1080 Ti AMP Edition, I am using a Gigabyte Z170X Gaming 7 motherboard powered with an Intel Core i7-6700K processor, overclocked to 4.5GHz. Overclocking the CPU to 4.5GHz should be on par or at least performs similar with the newer Core i7-7700K at stock. Below are the rest of the system specifications: 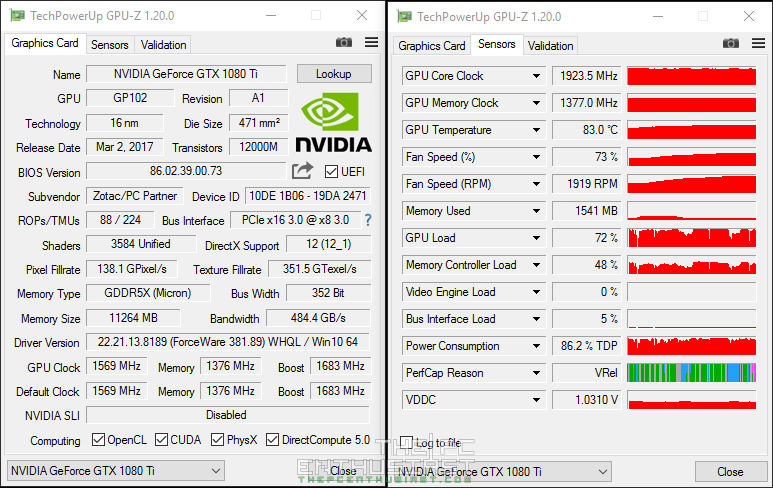 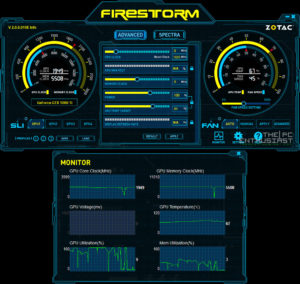 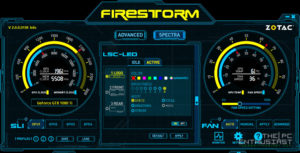 Zotac has a graphics card utility called FireStorm. This is a handy tool to tweak the graphics card’s GPU clock speeds, memory clock speed, control the fans manually and it also provides basic GPU monitoring. If you are not familiar with Zotac’s FireStorm, you may use other third party GPU utility to overclock the graphics card. However you will need the FireStorm to control the SPECTRA or the LED lighting effects on the AMP Edition, AMP Extreme and AMP Extreme Core. Note that the latest version (as of this time) is V2.0.0.019E. Older FireStorm versions may not be able to control SPECTRA properly.

The Zotac GTX 1080 Ti AMP Edition features a beefy cooler compared to the Founders Edition. The aluminum fin stack is not as thick as the AMP Extreme variant and it has only two fans instead of three. Nevertheless, its cooler is still very much capable of dissipating heat from the GPU and other components on the graphics card.

On idle to light load situations, the fan do not spin at all; making this graphics card dead silent. The temperature was hovering around 40°-ish degrees Celsius. Depending on your system’s cooling capability (air intake and exhaust) you may or may not get better temperature. On full load and with the fans set to auto, its temperature would reach up to 83° degrees Celsius. Once it reaches 80°+ temps, the fans will crank up to around 70% to 75% fan speed; they are a tiny bit audible but still very silent. 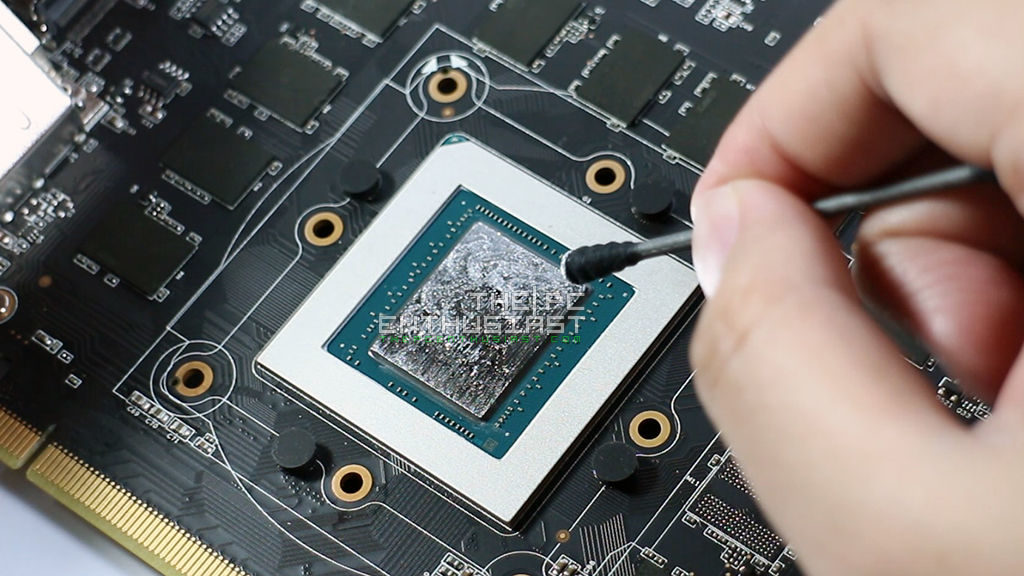 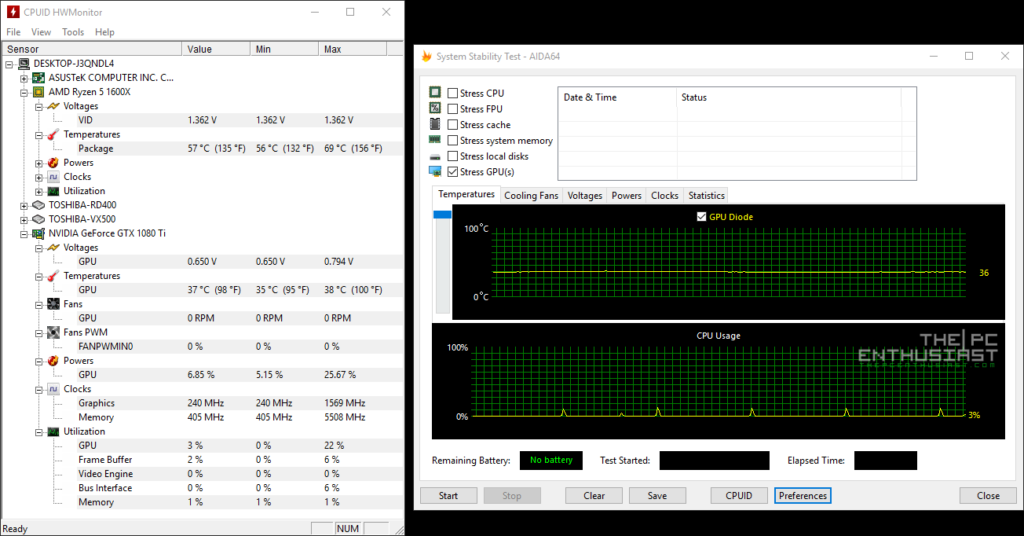 While the graphics card was on idle, I see around 5° degrees Celsius drop, from around 40°+ with the stock thermal paste. What’s even impressive is when the 1080 Ti AMP went full load. See screenshot below.

At full load, the temperature was just hovering around 77° degrees Celsius, from 83° with the stock thermal paste. It’s also noteworthy to mention that the fan speed also decreased from around 75% down to 59-60% fan speed. 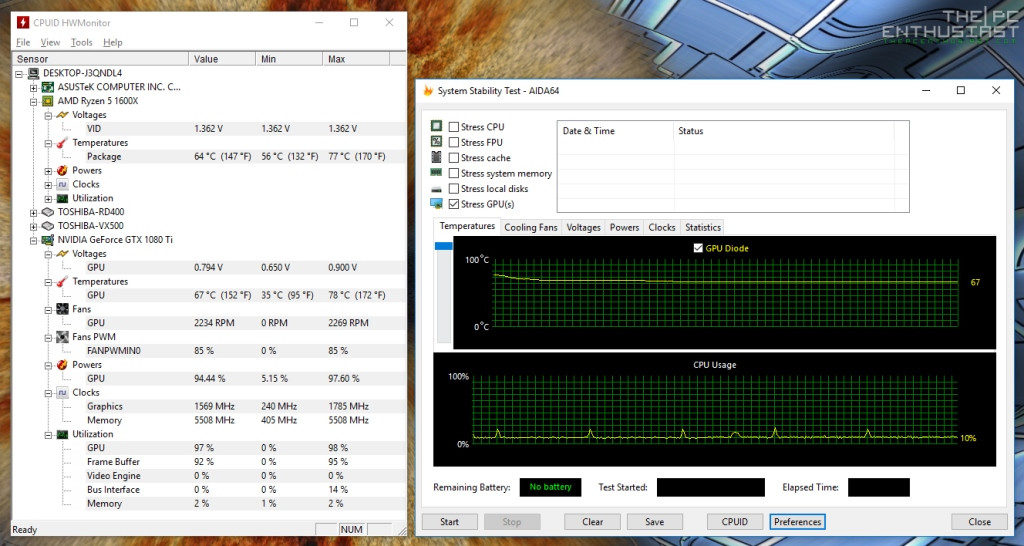 Since the fans on the Zotac GTX 1080 Ti AMP are very silent even at high speeds, I cranked it up to 85%. The temperature dropped down to 67° degrees Celsius! That’s very impressive considering that it’s running on full load.

Now you don’t really need to replace the stock thermal paste on the graphics card, since the cooler is doing a great job at cooling the GPU already. However, if you want to get better temperature (and you’re not worried of getting your warranty void), try the Thermal Grizzly Conductonaut. I haven’t tried CoolLaboratory’s Liquid Pro yet, but I believe the results would be similar.

Just a warning though, you can only use this kind of liquid metal thermal compound on copper base. Do not use it on aluminum surface.

Final note: all the testing and benchmarks results you see in this review were a result of using the stock thermal paste. 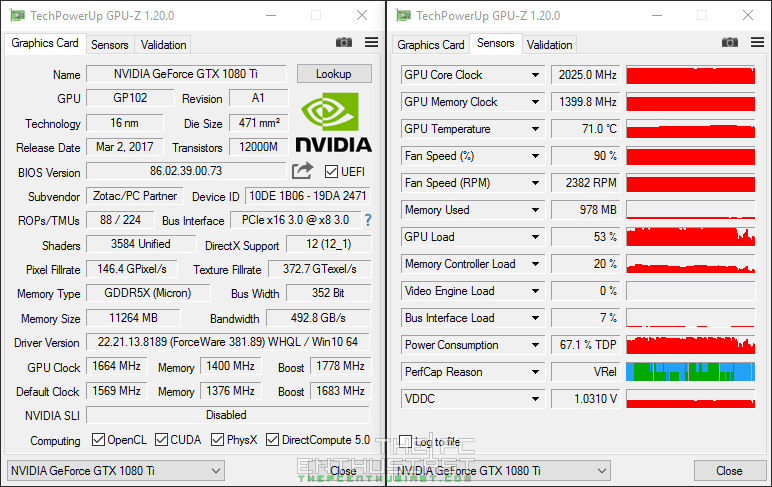 Depending on the quality of the GPU you get, you may or may not get better overclocking results. The clock speeds you see above are the best I can do with this card. Anything above will result in a crash or artifacts. The important thing here is that you need to keep the GPU cool enough so that it would boost to higher clock speeds. If the temperature is not managed properly, the GPU may suffer from thermal throttling or it may not reach higher boost clock speeds.

Now time to see what this badass graphics card can do. Proceed to the next page for the Zotac GTX 1080 Ti AMP benchmark results.