The Sound Blaster E5 comes with a software which can be downloaded from Creative’s support site. It’s not necessary to tweak anything. For music lovers, you would want the options here untouched to keep the music close to its original sound. However if you wish to change the equalizer settings you, you may do so by activating the EQ and setting the desired sound settings.

The software offers a number of enhancement and customization, like tweaking the SBX effect, configuring the CrystalVoice, setting the speaker setup and mixing the input and output volumes. You can also save profiles so that you don’t have to set and configure each time you open the software.

The fun part of it was Creative included a number of effects for the CrystalVoice where it actually alters the sound of your voice. You can make your voice sound like an elderly, or robotic, or demon-like, change your voice to female if you are male (vice versa) and etc. There are a total of 18 voice effects that you can play with.

The software is not only available for Windows OS, but it’s also available for Mac as well. For Android and iOS users, you can download the Sound Blaster Central App to take advantage of the customizations above. By the way, the E5 doesn’t have a Scout Mode. Most of you might not have heard of this feature or doesn’t need this kind of feature. But if you’re a gamer that need scout mode, you won’t find it here. However the E1, E3 and X7 has a Scout Mode feature.

Just like any portable DAC/AMP, the Sound Blaster E5 is very easy to use and user friendly. If you are using it with the PC, simply connect the E5 via USB the press the power button. Just an observation: when you use the E5 as your default output device, sometimes the E5 turns on by itself together with your PC. But when you turn on your computer and the E5 didn’t turn on with it, even if you press the power button of the E5 it still doesn’t power up; you will have to disconnect the USB and plug it again.

The white light indicates that the E5 is turned on. You should be able to see a red light coming from the optical out on the rear side as well. Notice those three dots in the middle section? Those are battery level indicators.

Meanwhile, to take advantage of the best possible sound quality you must configure the settings. In your Windows go to control panel -> sound -> select the Sound Blaster E5 and click properties. Then go to Advanced tab and from the drop down menu choose 24bit, 192000Hz. This will set the E5 to use 24bit/192KHz bit depth and sample rate. To pair the E5 with a Bluetooth device, simply hold the power button until the LED turns Blue. You will know when it is ready to pair when the Blue LED starts blinking. Once paired, the Blue LED will stop blinking. If in case it turns back to White, it means that the Bluetooth connection has been disconnected and you may need to reconnect. I was able to easily pair the E5 with my iPhone 5 without any problems. It didn’t have any difficulties detecting the E5, and same goes with my PC’s Bluetooth. Generally speaking the Sound Blaster E5 has a well-balanced and detailed sound. Without messing with the equalizer settings, special effects or SBX, it produces a neutral tone that is a bit warmer. I was already expecting that this would produce a warmer sound signature, since the E5 was not only designed for music lovers, but it was also designed with the gamers and movie watchers in mind. The bass is also not over powering and doesn’t sound too boomy. The mids and highs are also well articulated, detailed and pleasing to the ears. The mids may sound a bit warmer and it seems that the highs are not too bright as well. Nevertheless, they still sound great, rich and very immersive.

I have been using the E5 with several of my headphones, like the Audio Technica ATH-M50x, B&W P7, V-MODA XS and even the HyperX Cloud II. My current collection of headphones has low impedance and the E5 was able to drive all of them quite well without any problems. Hissing was also not an issue and I could only detect a small amount of hissing depending on the headphone or IEM. I don’t have any hard-to-drive headphones that have high impedance, at the moment. But the good thing about the E5 is that you can use it as a DAC only and connect an amplifier of your choice.

The Sound Blaster E5 can also handle my In-Ear monitors/headphones as well. I tried my Heir Audio 3.Ai S, Ultimate Ears 900s, Alclair Curve and even the hybrid DUNU DN-2000. All of them sounded well with the E5. Although at some point, the iFi Nano iDSD, which is priced just a tad lower than the E5, outperformed the E5 while carefully listening to both DAC/AMP using the same UE 900s, with the same source and same set of music. I also tried its Bluetooth capability and found it very impressive as well. I think it’s on par with the Audioengine B1, when it comes to BT performance. I did an experiment to see how far the E5 would go when Bluetooth is activate. I plug two headphones, an Audio Technica ATH-M50x and a Beyerdynamic T51i. Volume was relatively high enough for my ears to tolerate. I was expecting that battery life would only last for around 3 hours since it was already driving two headphones and was streaming audio via Bluetooth.  To my surprise, the E5 lasted more than 3 hours. It was somewhere in the sixth hour before the E5 got completely drained, starting from fully charged.

For gaming, the Sound Blaster E5 performed remarkably well. If your headphone doesn’t have a 7.1 surround effect feature, like the HyperX Cloud II, well you have one now, and definitely even better. With the E5 you can manually control how wide the sound staging is. You can enhance the audio quality to make things clearer, and you can definitely boost the bass to give it a more thundering roar. 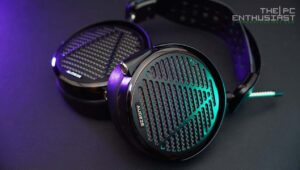 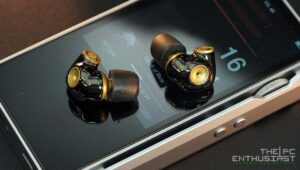