Today allow me to share a quick review comparison of the AMD Ryzen 7 3700X and Intel Core i7-10700K processors. Both CPUs feature the same number of cores and number of threads. But the rest of their specifications and set of features are quite different from another. Not to mention, both CPUs also have a significant price difference. If you’re in the market planning to decide which platform and CPU to get, check out our 3700X vs 10700K comparison below.

Like I mentioned recently, both CPUs feature 8 cores and 16 threads. But their similarity ends there, as the rest of their features and specifications are quite different. First, the AMD Ryzen 3700X is based on a newer 7nm fabrication processes featuring AMD’s Zen 2 architecture. It’s basically more efficient, plus it is newer tech.

Meanwhile, Intel is still using 14nm fabrication process, but with “plus plus” attached to it. Meaning, they have been using the same 14nm die since Skylake days; only improving and refining with each new release or generation. Intel’s Core i7-10700K is based on Comet Lake architecture, offering features like Thermal Velocity Boost, thinner die and thicker IHS, better overclocking capabilities, WiFi 6 and more.

However, Intel is still in PCI Express version 3.0, but AMD has managed to incorporate the latest PCIe 4.0 in their platform. That’s why you can only use Gen4 NVMe SSDs, like the Seagate FireCuda 520, on an AMD motherboard with PCIe 4.0 paired with a Ryzen 3000 processor.

When it comes to pricing, the Ryzen 7 3700X is cheaper with a manufacturer’s suggested retail price of only $329 at launch. While the Core i7 10700K comes with an MSRP of ~$374 at launch. By the time you stumbled into this article, I’m sure their respective current selling price are already different from their MSRP. I’ll talk more about their current pricing towards the end of this review.

Now, let’s check out how these two processors perform after the specifications table below.

Test Setup for this Comparison

In this comparison, I would like to keep things as similar as possible. So, I used the same DDR4 memory, graphics card and freshly installed Windows 10 v2004. Unfortunately, at the time of testing, I don’t have an Asus X570 on hand or an MSI MEG Z490 ACE.

Also, both storage drives are NVMe SSD, but the ADATA Spectrix S40G is faster than the Crucial P1. I don’t think it would greatly affect the results though, since we are testing the processors and not the storage.

Additionally, both systems are running at stock speed, with XMP enabled. I am aware that there is a feature in Asus’ motherboard where it would automatically boost the performance of the system. So, I disabled the multi-core enhancement and enforce the limits. Let’s start with some synthetic and productivity benchmarks, below are the results I got.

Here is an interesting part, the Ryzen 3700X is doing quite well when it comes to cryptographic workloads on a single-core basis. However, in multi-core test, the 10700K was generally faster in all tests. And surprisingly it was significantly faster on the cryptographic test. That was a bit puzzling for me. I was expecting the 3700X would perform well especially in multi-core crypto test.

In CPU-Z benchmark we can see that the 10700K is a bit faster than the 3700X. However, things were a bit different when it comes to the cryptography test in SiSoft Sandra. Just like in the Geekbench single-core crypto test, the Ryzen 3700X performed generally better than the 10700K in this test. Perhaps AMD CPUs are better when it comes to cryptographic computations.

Finally, in PC Mark 8 creative benchmark, using the conventional method, the Ryzen 3700X was just a bit faster than the 10700K. Whereas on the more up to date PCMark 10 benchmark suites, we can see that the 10700K is faster than the 3700X in all areas.

Now let’s see how these two CPUs perform when it comes to gaming. I know some of you have already an idea of what the results will look like. Most of you are probably guessing that the Intel Core i7-10700K would outperform the Ryzen 3700X by a substantial margin in all games.

Well, I wouldn’t be surprised at all. The 10700K is basically just like last gen’s flagship i9-9900K, only a bit faster and better. And take note, the i9-9900K was dubbed by Intel as the “world’s best gaming processor”. So, yeah, as expected Intel still takes the lead when it comes to gaming. Check out the results below.

The Shadow of the Tomb Raider was a surprise to me. I didn’t expect that the Ryzen 3700X would outperform the 10700K in this game. There are also neck-and-neck situations, like in the Monster Hunter World and Gears 5. Overall, the 10700K is still faster when it comes to gaming, but not by a significant margin.

Performance gap between AMD and Intel processors, when it comes to gaming, is becoming smaller and negligible. If Intel won’t do something revolutionary in their upcoming CPUs, AMD might take the lead in the future. Who knows…?

Both the AMD Ryzen 7 3700X and Intel Core i7-10700K are now available in the market. At the time of writing this review, most retailers are selling the 10700K for around $409.99 USD. That’s (way) more from suggested retail price. On top of that these 10th gen Intel “K” CPUs get sold out really fast, even when their price is above SRP. It’s very difficult to get one at this time.

On the other hand, the 3700X has been in the market for quite some time. There’s plenty of Ryzen CPUs, as a result some retailers are selling the 3700X below the suggested retail price. At the time of writing, it’s around $280 USD, plus or minus depending on the retailer. For latest pricing and availability, kindly check out the links below.

I’ve been using the 10700K for more than a month now, and the 3700X since late last year. For the past several weeks, I have been using both system side by side. Honestly, both feels and performs very much the same. I don’t have a really demanding workload, but when it comes to editing photos, browsing the web, media consumption, desktop multi-tasking, both systems are very responsive and runs smoothly.

One advantage of the AMD system is it supports PCIe Gen4. I can use and test Gen4 NVMe SSDs on that system. However, I don’t feel that there is a significant or reasonable advantage of a Gen4 SSD vs a Gen3 SSD at this time. Sure, transferring files is a lot faster compared to a Gen3 SSD. And if you’re work requires a fast storage drive, then go for Gen4. But I don’t think it’s the same for most users.

Between Gen4 and Gen4 NVME SSDs, there’s no advantage when it comes to gaming as they load just as fast. Speaking of gaming, I will still leave that task to the 10700K whenever I test, benchmark or play games. It is still faster in gaming, generally speaking.

Also, I noticed that the Intel system boots up way faster than the AMD, same goes with shutdown times. I haven’t tried other X570 motherboards yet, perhaps it’s just with this MEG X570 ACE. But there are reports of slow boot up time with X570 systems in general. To be clear, when I say slow, I don’t mean in minutes. But it does take a few seconds more before it logs in to Windows.

Lastly, based on specs alone, the Intel Core i7-10700K looks more attractive; with its faster clock speeds and better overclocking capabilities. If you like overclocking CPUs, I think you’ll find the 10700K, more enjoyable to work with. However, we can’t deny the fact that the 3700X is substantially cheaper than the 10700K. And performance-wise, it’s not far behind.

The Ryzen CPU simply has the better price to performance ratio. Although, when I checked for the current prices of the X570 motherboards, they are a bit expensive than their Z490 counterpart. AMD’s latest B550 motherboards are cheaper though. Just take note of the limitations of these B550 motherboards.

Which CPU do you think is better for you? Are you going for Intel or AMD? Or perhaps you’re waiting for AMD’s upcoming Zen 3 and Intel’s 11th Gen Rocket Lake CPUs later this year? 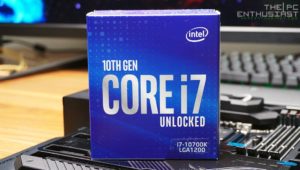