Today we are going to review the Crucial MX500 SSD 2TB capacity. We previously reviewed the 500GB and 1TB capacities, and both drive capacities generally perform well. So how does the 2TB compare with the other capacities? Do they have the same performance? Is it going to be faster? How does it perform when it comes to gaming? These are just some of the questions we are going to try to answer in this review. We’ve included some game benchmarks in this review to show you some of the benefits of using an SSD for a game drive vs an HDD. So if you’re in the market looking for a large storage drive for your files or a game drive, stick around and continue reading our Crucial MX500 2TB SSD review below. The Crucial MX500 SSD series is currently the company’s high performance SSD storage solution. It has been in the market since January 2018. The MX series basically offers faster read/write speeds, better reliability, security and protection compared to their budget friendly BX series.

The MX500 SSD series offers great price to performance ratio and is “45 times” more energy efficient than a typical hard drive. It features Dynamic Write Acceleration optimizing its write performance; Integrated Power Loss Immunity; Exclusive Data Defense that protects against data corruption; Adaptive Thermal Protection; and an AES 256-bit hardware-based encryption to keep the data safe and secure. These protection and security features are not available on the BX series. Another reason why you should consider the MX rather than the BX series.

The Crucial MX500 SSD uses the 2nd generation Micron 3D NAND technology, paired with a Silicon Motion SM2258 controller. The 2nd gen 3D NAND chips features 64 layers with 256-gigabit component. Micron’s floating gate NAND is designed with CMOS Under the Array (CUA), which allows to minimize the footprint of the die. It measures 59 square millimeters, making it one of the world’s smallest 256-gigabit die.

On paper, the performance of the different capacities of the MX500 SSDs are similar regardless of their capacity. From the 250GB to 2TB capacity, all MX500 drives offers performance of up to (or around) 560 MB/s sequential read and 510 MB/s sequential write speeds; or 95,000 IOPS random read and 90,000 IOPS random write. But we will find out in this review whether they really do have the same performance in real world use or scenario.

The Crucial MX500 series are available in 250GB, 500GB, 1TB and 2TB capacities; and all capacities have a mean time to failure rate of 1.8 million operating hours. However, they have varying drive lifetime or Total Bytes Written. The 250GB has a TBW of 100TB, 500GB has 180TB, 1TB has 360TB and the 2TB has a 700TB of TBW. You can check out more details from the specifications table below. Crucial’s packaging for their SSD lineup remains mostly similar. Their SSDs are enclosed on a small square box; with proper labeling and box art design to distinguish one lineup or series from another. They put a (small) sticker to indicate the capacity of the drive; usually located at the bottom left portion.

The MX500 SSDs have grey/silver aluminum casing, just like all their SSDs. Like with their previous generation, you can only see the label “MX” or “BX” on the sticker; but no clear indication whether which MX or BX generation is it. You’ll have to check the sticker label at the back side of the SSD for additional information; like its model, capacity, serial number and etc. The MX500 SSD 2TB capacity has its both side of PCB populated with 2nd gen 3D NAND chips. The 1TB capacity only has one side populated. Basically they have similar PCB design/layout; it’s just that the 2TB has 8 more NAND chips compared to the 1TB capacity. You can also see on the front center (near the SATA ports) the Silicon Motion SM2258 chip controller. Above (or near) the controller is a Micron D9STQ DDR3-1600 memory cache, with 8Gb density. Crucial also uses this memory on their P1 NVMe SSD. The 2TB capacity has two DDR3 chips installed. Thermal pads are placed on the controller and on the middle portion of the NAND chips to help transfer heat from these components to the aluminum casing. In testing the Crucial MX500 2TB SSD capacity, I am using an MSI MEG Z390 ACE motherboard powered with an Intel Core i7-8700K CPU. Below are the rest of the system’s specifications:

For those who are uninitiated when it comes to storage drive capacities; you can’t really use the full advertised capacity. In this case, the maximum usable capacity of the MX500 2TB drive is 1.81TB only. Also note that if you are copying your files from a hard disk drive (HDD) or a slower drive, you’ll notice that the write speed displayed by the copy handler is slower. This is because the slower drive is bottlenecking the (copy/transfer) operation. As you can see from the screenshot below, when I copied the Steam and Origin folders to the MX500 2TB, the maximum transfer speed I got was only around 222MB/s. That’s actually the maximum read speed of the hard drive. It could have been faster if the files were coming from a much faster drive or similarly faster drive. 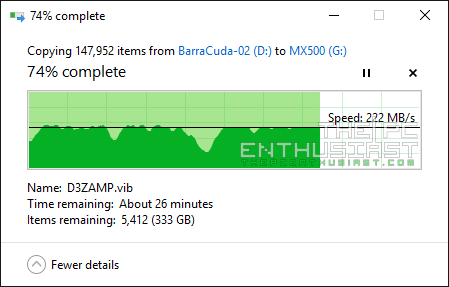 Also, the benchmark results on the succeeding pages are the results I got during my tests using the specific sample Crucial sent. Performance may vary from one capacity to another and from one system to another (slightly). You may or may not get the same exact results shown in this review.

For comparison, I’ve included benchmark results from different SATA SSDs and a WD hard drive in the graphs. I also included M.2 NVMe SSDs, like the high performance WD Black 3D and Samsung 970 EVO NVMe, including Crucial’s P1 NVMe SSD. This is to show you the difference of SATA HDD vs SSD vs NVMe SSD when it comes to speed.

Proceed to the next following pages for the benchmark results.