One of the most common issues that I encounter when I try to record my gameplay or game benchmarks internally, whether using GeForce Shadowplay or any third-party software, is that it usually affects the performance of the PC. Thus, frame rates are down, sometimes causing stutters or lag. I see a lot of streamers where their gameplay suffers from stuttering or (sudden severe) lag. Well, one effective solution is to use a capture card, and today we are going to look at the Elgato 4K60 Pro MK.2. This is actually the second generation, the first one was a bit larger in size compared to the MK.2. There are also several new features or improvements. So, if you are recording your gameplay, especially to capture those best moments, or streaming; stick around and continue reading our Elgato 4K60 Pro MK.2 review below and learn more about this capture card. 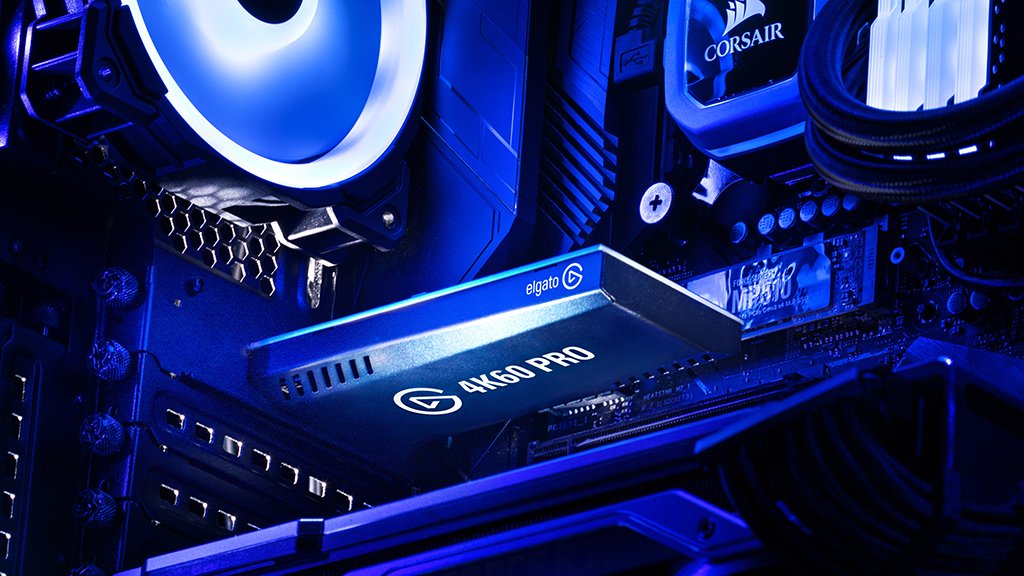 Q3 last year, Elgato released the Elgato 4K60 Pro MK.2, it’s the second generation (thus mark 2) of their 4K capture card. The first one is also called Elgato 4K60 Pro but with less features and it was also physically larger. It is a little bit confusing though, but just remember the new one has an MK.2 on it, and the old one is already discontinued. For reference, below are photos of the OLD 4K60 Pro. The newer Elgato 4K60 Pro MK.2 (photo below) is capable of capturing 2160p resolution at 60 fps, and on top of that it is also capable of capturing HDR10. I’m not particularly excited about the HDR10, but it’s a good feature and will be useful in the future when HDR10 (true HDR) becomes a “default” feature or at least a common feature in most gaming monitors. Right now, HDR is still not that popular. Most gaming monitors nowadays is only at HDR400 or HDR600, far from HDR10 or true HDR with 1,000 nits of brightness. Monitor companies just slap it on their monitor just for the sake that they say their monitors are “HDR capable” or “HDR ready”. It’s a marketing term similar to “VR Ready” or “Gaming” or “RGB” to better sell their products.

For streamers, if you have a graphics card powerful enough to drive games at 4K resolution, like the GeForce RTX 2080 Ti; the 4K60 Pro MK.2 lets you play high-fidelity games while simultaneously streaming to Twitch in 1080p at 60 fps and recording your gameplay at 2160p 60 fps with HDR10 to your storage drive.

You do need a dual PC setup to enable most of its features or maximize its capabilities. This is something that I misunderstood at first. While you can use the 4K60 Pro MK.2 on a single PC setup, it is not the ideal setup. Your system may suffer from performance or may not work properly at all.

The Elgato 4K60 Pro MK.2 also features advanced hardware tonemapping that lets you play in HDR while capturing in SDR. This feature ensures that you get the best color reproduction without putting stress on your system. It also supports multiple capture feeds sent from multiple apps like OBS and Elgato 4K Capture Utility. And for those hardcore streamers, you can install several 4K60 Pro MK.2 on the same PC so that you can capture video from multiple cameras, consoles and PC at the same time.

Below is table comparing the 4K60 Pro vs the HD60 Pro and HD60 S. I think it’s very obvious which is the more capable capture card among the three. After that, let’s take a closer look at the capture card itself. 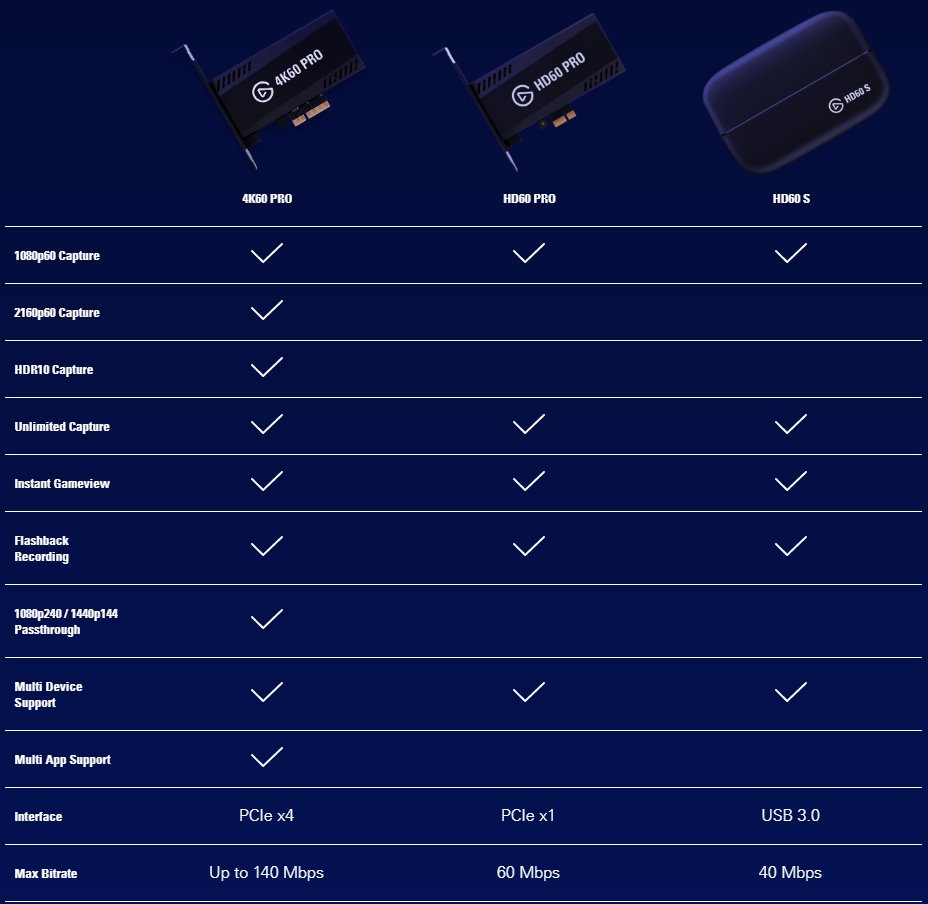 The Elgato 4K60 PRO MK.2’s box doesn’t tell you that it is the Mark 2 version or the newer one. It just shows “4K60 PRO” on top with some of the features listed at the front and back portion of the box. However, one way to tell that it’s the newer one because the capture card itself is smaller, as you can see from the photo on the box. The older one measures 178mm x 121mm x 21mm, while the MK.2 measures only 56mm x 121mm x 19mm.

Included in the box are the capture card, an HDMI cable and a smaller or low-profile PCI bracket for slim PC cases. The newer 4K60 PRO MK.2 also doesn’t have a backplate, as you can see from the photo above. It uses the smaller x4 PCIe interface, so you can install the capture card on a PCIe x16 slot, x8 or x4 slot.

The Elgato 4K60 Pro MK.2 is a completely plug and play device. Meaning, you don’t need to install any driver to make it work with your system. But it does require that you are running on Windows 10 (64-bit) and at least a 6th Gen Intel Core processor or AMD Ryzen 7 CPU.

You also need to install the Elgato 4K Capture Utility or OBS or XSplit to record and capture your gameplay. It’s up to you what software to use, depending on what you need or what software are you familiar with. At least, it is compatible with several popular apps and the option is there.

Aside from a PC to PC setup, this capture card is also great for PS4 Pro, Xbox One X, Twitch and YouTube. I’m not 100% sure that it will support the upcoming PS5 and Xbox Series X, but I think it will. As for encoding, it uses HEVC/H.265 HDR and ACV/H.264. Setting up the Elgato 4K60 PRO MK.2 was very easy. I am using a 2 PC setup: the first one is the “gaming system” with Intel CPU and RTX 2080 Super graphics card; and the “capture system”, where the Elgato 4K60 Pro MK.2 is installed, is powered with an AMD Ryzen CPU with an RTX 2080 graphics card. Below are the specs of the system:

I need to use the AD27QD 1440p 144Hz monitor for the gaming system, so that the capture card will also get a 1440p 144Hz signal from the gaming system. Both output (AD27QD and Elgato) are mirrored from the display settings of Windows. That’s basically it for my gameplay recordings. Again, depending on your need or if it is for streaming, then you may need a different setup or configuration.

Obviously, you don’t need a setup like mine. You can use the capture card with any system or configuration as long as it meets the system requirements. Also, the photo above is not my actual system or setup. My setup is a bit of a mess and isn’t photo-worthy. It’s a photo from Elgato, but basically that’s how it will look like in a 2 PC setup with 2 monitors.

The first monitor is the main monitor, and the other monitor is for the capture system where you can see the 4K Capture Utility running and recording the gameplay. The photo below is a screenshot I took from my capture system. I’m definitely no streamer, so I can’t show you an example how to setup the Elgato 4K60 PRO MK.2 for streaming. But there are a lot of articles, references and tutorials out there that would help you setup the capture card with your streaming system. Elgato also has a help section for their capture cards.

I primary use the 4K60 Pro MK.2 to record my gameplay, record some benchmarks to show how a graphics card would perform or compare its performance with another graphics card without affecting the frame rates.

To record a gameplay, you will need a recording software and luckily Elgato has the 4K Capture Utility. It’s a totally free software that works side by side with the 4K60 Pro MK.2. Aside from straight recording your gameplay, it also has Flashback Recording that lets you save your gameplay retroactively with convenient DVR-like controls. It also lets you record microphone audio as a separate track, just like a Live Commentary. You can basically edit and arrange gameplay, game audio, and microphone audio independently in post-production with the help of the 4K Capture Utility.

Again, you can use other software like OBS or XSplit if you prefer those software or if you are more familiar with them.

The 4K Capture Utility has a simple user interface. You have the Capture tab and Library tab on the top left-hand side. The Capture tab shows the live feed coming from the input, and it is also where you begin or stop recording. The Library tab basically shows all the recordings that you have.

On the top right-hand corner is the options menu, represented by a gear icon. Photos 4 to 8 shows the different sub-menus and options under each option. From there you can configure your device input and output; now, this does depend on your setup and how you want the final output to look like. Again, there are a lot of tutorials for this depending on your setup or the type of results you want to achieve.

You can also change the picture quality or some of its properties like brightness, contrast, saturation and hue. Then, there is a separate option for the video recording and mic input. Do note that while recording at a higher Bit Rate, video quality does increase but it will also significantly increase the file size of the recorded video. So be sure that you have enough storage space, or you are using the right configuration depending on your setup and/or your project’s requirements.

The Elgato 4K60 Pro MK.2 capture card is now available and comes with a manufacturer’s suggested retail price of $249.99. It is also backed by a two-year warranty and the Corsair and Elgato worldwide customer service and technical support network. For latest pricing and availability, kindly check out the links below.

I think the Elgato 4K60 Pro MK.2 is an excellent capture card, especially for recording gameplays and capture those moments without an impact on your gaming system’s performance and gaming experience. Although I haven’t tested competing capture cards, like from AVerMedia, and declare which capture card is the best out there; the 4K60 Pro MK.2 is certainly the more popular choice and I could comfortably say it’s currently one of the best capture card, if not the best.

The 4K Capture Utility is also easy to use and a great tool that works with the capture card. It’s a good thing that this software is free. Otherwise, I may have a different opinion or verdict if it weren’t, considering that the 4K60 Pro MK.2 already commands a premium price.

Also, there are plenty of use case scenario for the 4K60 Pro MK.2 aside from simply recording your gameplay or streaming. It can basically record everything what you see on your display; so, this means you can also use it to make tutorial videos or “how to” guides that is not limited to gaming, but may be related PC or Windows in general.

Although I haven’t fully explored the 4K60 Pro especially on the streaming side, one downside that I see with this is that you do need another PC to serve as the capture / recording system. Ex: PC to PC, PS4 Pro to PC or XBox to PC. If you don’t have a separate PC to serve as the “capture system”, the company recently released the Elgato 4K60 S+ – an external capture device that lets you record up to 4K60 HDR10 gameplay directly to an SD card without the need for a connected PC. We haven’t explored this one yet, and it is a topic for the future.

Overall, I think the Elgato 4K60 Pro MK.2 capture card is a must have peripheral for streamers or gamers who want to record their gameplay and share it to the world. It is a little bit pricey but it simply works well.