The Intel Core i7-10700K is generally faster, however, notice that the 3700X is a bit faster in Fire Strike and Fire Strike Ultra compared to a 10700K running at stock speeds.

In Superposition, we can see a significant difference in 720p low settings. However, the performance difference between the 10700K and 3700X is very small in 1080p high and 1440p high.

Is it going to be the same case with real games? Let’s check out the graphs below. What’s surprising is the fact that the Ryzen 7 3700X is faster in Shadow of the Tomb Raider. I’m not sure what happened there, but the results were similar after running the benchmark sequence several times.

There are some games where the performance difference between the 10700K and 3700X is very slim. And sometimes, the difference in average FPS and/or 1% lows are negligible. That’s actually good news for AMD. Well, time to wrap up this review.

If you are interested in getting one of these CPUs, you can check out the links below.

Usually, with Intel’s K CPUs, you can push them by a few more hundred MHz. If you are lucky enough, 5.3GHz is achievable with these 10th gen CPUs. However, with AMD CPUs, usually the highest boost clock speed is pretty much the limit for an all-core overclock.

I was able to push the 10700K with an all core overclock of 5.1GHz. Actually, I was able to push it even further to 5.3GHz but with an AVX offset of 2. I haven’t fully tested that overclock yet so I decided not to include it in this review. Nevertheless, I think Intel’s CPUs are more fun to overclock than AMD’s Ryzen CPUs.

Price to performance is not the only problem that the current 10th gen Intel CPU faces. These 10th Gen CPUs doesn’t support PCIe Gen4 interface, which AMD already support in their Ryzen 3000 CPUs. Perhaps many of us do not need a fast Gen4 SSD right now, but another issue is availability. These 10th gen CPU are literally nowhere to be found at the time of writing. It’s almost impossible to get a 10900K or a 10600K, and even the non-K CPUs are either sold out or out of stock.

At the back of my mind, I can’t help but think that these 10th gen CPUs are just stopgap products. We’ll have to wait for the next gen Rocket Lake CPUs if we ever want to see more features in Intel’s platform, aside from the WiFi 6 standard offered in Z490 chipset.

TL; DR, the Intel Core i7-10700K is a good CPU for gaming and some productivity workload, but it is not very attractive when it comes to price/performance or value. 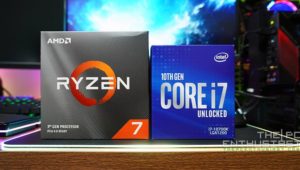