The Plextor M6 Pro is the company’s latest and fastest SATA Solid State Drive to date. Aside from the uniquely champagne gold casing (and I mean really unique even the packaging), it features a read/write speeds of up to 545MB/s and 490MB/s respectively (in higher capacities). The company also added a new feature called PlexTurbo – a unique second-generation RAM caching software, where it can significantly boost the M6 Pro’s performance by utilizing the system’s memory. The first Plextor SSD I encountered was their M6e PCIe SSD, but they released better PCIe SSDs just recently. So far, the M6 Pro is the company’s flagship for their SATA III storage solution, and they have built this SSD to compete with other leading brands, not only in terms of speed, but also in terms of value and features. Let’s find out more about the Plextor M6 Pro 256GB SSD in my review below. Like I said earlier, the Plextor M6 Pro is currently their flagship SATA 6Gbps SSD. It uses a new generation A19nm Toshiba toggle NAND flash and Marvell 88SS9187 controller. It is rated to have a sustained sequential read/write speed of up to 545MB/s and 490MB/s respectively. Meanwhile, real-world random read/write speeds can reach up to 100,000 IOPS and 88,000 IOPS respectively. But can it really reach and maintain those speeds? We will soon find out below.

Unlike the typical SSD on the market, the Plextor M6 Pro is not only built to have a fast read/write speed, but it is also built with features that you may not see on other SSDs. The M6 Pro is the first SSD from the company to feature PlexTurbo, a “software that uses some of the system RAM as an ultra-smart RAM cache; this bypasses the limitations of the 6Gb/s SATA III channel and maximizes performance.”. It’s similar to Samsung’s RAPID mode on their 850 Pro.

The PlexTurbo includes an Intelligent Boost Engine® (IBE) technology that automatically detects hot data (frequently accessed) and cold data (occasionally accessed) and applies the best caching patterns to each for highest performance. It also comes with Reduced Memory Usage in which PlexTurbo will dynamically create and compare data patterns before merge the same command data into one buffer to accelerate write response speed.

The Plextor M6 Pro is also the first SSD to survive Plextor’s new ultra-strict, enterprise-grade, Zero-Error standard requiring 400 units to pass 1008 hours of extreme testing. It’s also rated to have a mean time before failure rate of 2.4million hours. Finally, the company is offering a full five year warranty for the M6 Pro.

Other features of the M6 Pro includes TrueSpeed Technology which keeps the long-term SSD performance at like-new speeds; TrueProtect which includes 256-bit AES full-drive encryption and advanced multi-layer error checking for full data protection; and DEVSLP mode to reduce power consumption by going into an ultra-low power sleep mode that needs almost no power, but which supports a very rapid wake up.

Well, enough of the marketing stuff and let’s take a look at the product itself and finally put it to the test. This has got to be the first and most eye-catching box I’ve even seen (compared to other SSDs). I’m not sure what color is that, Rose gold or champagne gold? Whatever it is, it’s definitely unique. Like most SSDs, the features and specifications are printed at the back of the box.

Slide the first layer of flashy cover and it will reveal a plain black box. Remove the top cover and it will reveal the Plextor M6 Pro, having a similar striking color with its packaging. The package includes an array of accessories, such as: driver / software CD, quick installation guide, warranty, a 3.5-inch bracket, VIP customer support, a few screws and an extra SATA cable. The enclosure of the Plextor M6 Pro is quite unique as you can see from the photos above. According to the company the color is rose gold or champagne gold, but it actually looks like copper on the actual, with an aluminum brushed surface.

Inside the Plextor M6 Pro 256GB SSD, you can see 8x Toshiba A1923 MLC NAND flash and a Marvell 88SS9187 controller – which is proven to perform well and is used by other high performance SSD. Plextor is using an in house firmware to drive the M6 Pro though. You can also see two SKhynix H5TC2G63FFR 256MB DDR3 cache and a winbond 25Q80BV – an 8M-bit 3.0V Serial Flash Memory with uniform 4KB sectors and Dual/Quad SPI.

Since this is only a 256GB capacity, the back is pretty much empty. There is also a thermal pad for the Marvell controller that makes contact with the internal surface of the aluminum enclosure.

Here’s how the PlexTool utility software looks like. It is recommended that you download the latest version from Plextor’s website. Using the PlexTool, it gives you a summary of the drive’s status and some few other functions. You can also secure format the drive, update its firmware, do some diagnostic scan, display SMART details and enabled PlexTurbo. I would also recommend that you update the drive’s firmware to its latest version.

I find the Secure Format function a little bit annoying. Because every time I tried to do a secure format, it keeps on telling me to unplug the drive and replug it since the drive was frozen. I decided to format the drive using the Window’s Disk Management instead. Also when you try to enable PlexTurbo, it will require you to restart your system before changes take effect.

In testing the Plextor M6 Pro 256GB SSD I used my Asus Maximus VI Impact with an Intel Pentium G3258 Anniversary Edition CPU. Below are the rest of the specifications of the test system. The results are consistent with what I got in CrystalDiskMark benchmark. Above you see the 32-bit and 64-bit benchmark tests. Both returned an impressive read/write speed. The benchmark result is actually close with what I got from the Samsung 850 Pro 256GB SSD. The speeds dropped by a few megabytes in the AS SSD benchmarks but it is still close to the 500MB/s mark. As you can see from the Anvil’s Storage benchmark results I got, the read speed remained around 509MB/s and around 455MB/s write speed whether the file is compressible, incompressible or mixed. Many SSD’s in the market doesn’t perform well with incompressible files and their write speeds greatly vary depending on the type of file.

Now let’s activate the PlexTurbo and let’s see the change in numbers. The read/write speeds got a significant boost when PlexTurbo was enabled. I noticed that results greatly differ and are not consistent from one another. This is primarily because we are not seeing the actual performance of the M6 Pro, but the performance of the system’s memory. 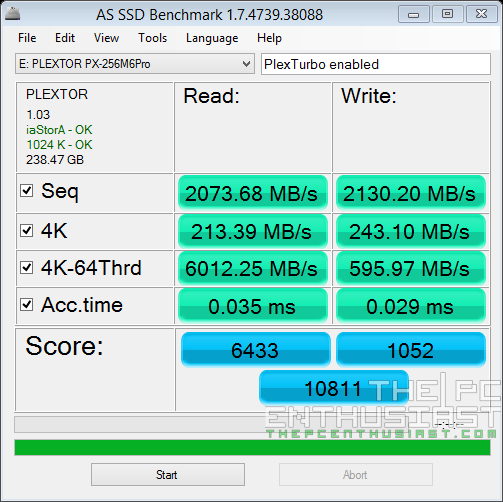 Again, in the CrystalDiskMark and AS SSD benchmarks you are seeing the read/write speeds of the system’s memory. Also notice that there is a 1000MB/s difference in the performance. This indicates that performance varies and is not consistent. Finally, during the AJA System test and Anvil’s storage benchmarks, only the read speed got the significant boost. The read speeds reported above are still from that of the system’s memory. Meanwhile, the write speeds (which is around 400MB/s) is the actual write performance of the Plextor M6 Pro.

To clarify things, the PlexTurbo won’t actually increase the speed of the M6 Pro since basically the SATA 6GBps interface won’t allow it and it’s the limit. It simply uses the system’s memory that’s why we are seeing an enormous increase in the read/write speed. It’s like the Plexor M6 Pro is using your system’s memory as an extension to somehow boost its performance. And this feature is very similar to Samsung’s RAPID mode. The Plextor M6 Pro did not only impressed me with its refreshing new looks, but it also impressed me with its performance. The read and write speeds were very consistent throughout my tests and it’s also near the rated or advertised speed. Although I have to emphasize that the 545MB/s read and 490MB/s write rated speeds are from 256GB and above only. The 128GB capacity doesn’t perform as fast as the higher capacities. If you noticed from the specifications table above, the PX-128M6Pro (128GB) has only a rated write speed of 330MB/s.

I like how Plextor differentiated their M6 Pro by giving it a stylish “copper-ish colored aluminum brushed surface” enclosure. Plus it’s available in various capacities, although I wouldn’t recommend the 128GB capacity though due to its lower speeds. Just like Samsung’s RAPID mode, the PlexTurbo is a nice added feature. But I’m still having mixed feelings about this kind of feature. It does give a (significant) boost in terms of performance, but I would rather rely on the raw performance of the SSD itself and leave the system’s memory untouched and reserved for its primary purpose. Nevertheless, even without the PlexTurbo, the M6 Pro is still a great solid performing SSD.

Finally I find the Plextor M6 Pro 256GB is a great SSD and I find no reason why I shouldn’t recommend this SSD to you. When it comes to performance, it’s not the fastest I have tested, but it’s one of the fastest, and it still impressed me. It handles both compressible and incompressible files very well, and read/write speeds are consistent. This would make a good alternative to some of the higher priced SSDs, like the 850 Pro, specially if you are looking for a high performance SSD.