A power supply is an integral part of a system; whether it’s a gaming PC, a workstation or a simple desktop PC. One common mistake of (newbie) users is they usually cheap out on the power supply, or PSU for short. We always recommend that you get a good power supply that is 80 Plus certified, and is sold by a reputable company or manufacturer. We have here one of SilverStone’s Strider Platinum series power supply, specifically the SST-ST1000-PT. It’s a 1000W power supply hailed under their Strider Series and comes with an 80 Plus Platinum certification. Is this a good PSU? Let’s find out in our SilverStone ST1000-PT review below. When building a new (gaming) desktop PC, we usually recommend that users should get at least a good and reliable 80 Plus certified power supply.  But what is 80 Plus in the first place?

What is 80 Plus Certification?

According to Wikipedia, 80 Plus is a voluntary certification program that aims to promote efficient energy use in computer power supply units or PSU. It was first launched way back in 2004 by Ecos Consulting. They certify PSUs that have more than 80% energy efficiency at 20%, 50% and 100% of rated load, and a power factor of 0.9 or greater at 100% load.

The 80 Plus certification is just one aspect that you should look out for in a power supply. It tells the efficiency of the PSU, but it doesn’t really translate to the quality of the power supply as a whole. In short, not all 80 Plus certified PSUs are guaranteed to last long or will work without fail. Just like any other electrical components, these are not immune to quality issues, poor manufacturing or engineering faults and other issues.

That is why, aside from the 80 Plus certification, it is important to buy a power supply from a reputable manufacturer; like SilverStone, Seasonic, Corsair or EVGA. Honestly, some even top PSU manufacturers sometimes have bad or faulty products. A few of years ago, I got an 80 Plus Titanium Prime from Seasonic that was dead right out of the box.  I’m not really sure what happened with that unit, perhaps it was an issue with quality control.

Anyway, going back to the SilverStone ST1000-PT, this is one of the company’s top tier power supply and it has been in the market for quite some time already. Obviously, it has an 80 Plus Platinum level of efficiency and it features a fully modular cable design. This means, you only need to connect the cables that you need, keeping things tidy in your system.

It also features a “powerful” single +12V rail design and a ±3% regulation and low ripple & noise performance for stability. The SST-ST1000-PT has a 139mm “Air Penetrator” fan that features an “intelligent RPM control” for a semi-fanless operation. According to SilversStone, this guarantees cool performance and “silent operation with minimum 18dBA during fan operation”. I’ll discuss more of this later, since the unit that we have here isn’t quite silent, especially under load.

Below are the specifications of the ST1000-PT and after that let’s take a closer look at the PSU itself. The SilverStone ST1000-PT came with a large and heavy rectangular box. PSUs with higher wattage usually have this kind of packaging. The name and a photo of the PSU can be seen at the front, and some of its features are printed at the back. At the side of the box, you can see what cables are included with the PSU.

Now, before I forget, do not confuse or mix up the ST1000-PT with the ST1000-PTS. The ST1000-PTS has a compact body designed for chassis with limited space or smaller area. That PTS version also has fewer cables compared to the full-sized ST1000-PT. The package includes some reading materials (manual and guide), and a magnetic FF141 fan filter. Aside form the six types of cables included in the package, you also get a power chord, some cable ties, mounting screws and Velcro straps. SilverStone placed a huge warning sign informing the user that the PSU’s fan will not spin during light load situations. It’s perfectly fine, it’s a similar feature that you can find on newer graphics cards; most commonly known as “fan stop” feature.

The SilverStone ST1000-PT measures 180mm in length, 150mm in width and is about 80mm in height. It’s quite heavy, weighing 3.3 kg just the unit itself. In terms of build quality, the unit itself feels very sturdy and solid. The surface of the PSU is textured but it doesn’t feel as rough compared to a 1000-nit sandpaper. The feeling is somewhat similar to a hard mouse pad, like the Razer Firely V2 or the Corsair MM800 RGB Polaris. The included FF141 fan filter is magnetic so you can easily attach it directly to the power supply or on the chassis. It’s quite handy and useful actually. There are protection caps that cover the ports. The caps prevent unwanted debris or particles from getting inside the connectors. Admittedly, I am not an expert when it comes to testing power supplies. We don’t have the proper equipment to test how well a power supply is or not. However, I can point you to two sources who properly tested this power supply. I’ll also share my user experience while I was using the power supply to test the new Z490 motherboards.

According to PCPer, the SilversStone Strider Platinum Series 1000W performed very well during their tests. The overall efficiency of the PSU is excellent and meets the 80 Plus Platinum criteria, even while operating on 120VAC at elevated temperatures. You can read more about their review here.

When I was testing the Z490 motherboards, together with an Intel Core i7-10700K and RTX 2080 Ti, I didn’t observe any instability or any anomaly in the operation of the system as a whole. I also didn’t observe any coil whine or weird behavior coming from the power supply. This led me to believe that in terms of performance, I think the ST1000-PT does deliver. However, there is one thing that I think ruins the great performance of this PSU. And that is its 139mm air penetrator fan.

The fan itself does a great job at cooling the power supply. And I think it actually does its job too well that most of the time, especially under load, it sounded like the ST1000-PT has a sports car engine built into it. In short, the fan noise is just loud and it is nowhere near at being silent.

In light load situations, the fan doesn’t spin at all and on not-so-heavy load, the fan will start spinning. However, once the load becomes heavy, especially when the GPU’s load starts to go above 50%, the fan’s speed starts to jump resulting in a very audible noise. The noise is actually louder than the fans on my AIO and the fans on the RTX 2080 Ti combined.

According to AnandTech’s review, the SilverStone Strider Platinum is undoubtedly reliable and very well made. It is generally good, but not impressive. They also observed that although thermal performance is very good, the cooling profile is quite unbalanced. You can read more about their findings here.

Like in my observations, the fan tends to spin (really) fast even if it doesn’t need to. This results in unnecessary (loud) noise even in medium load. Now, I’m not really bothered by it, since I am using the ST1000-PT in my test bench. The fan noise, in an unpleasant way, lets me know when the system begins to consume more power or when the GPU kicks in. Though, I highly doubt that it is acceptable for most users. 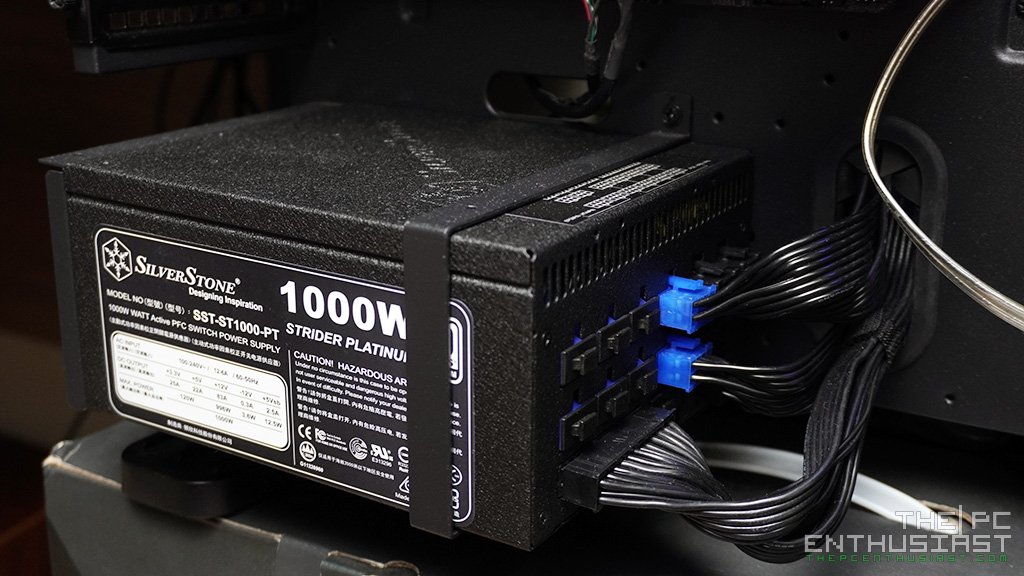 After several weeks of using the SilverStone ST1000-PT power supply to test several of the new Z490 system, I think it delivers when it comes to performance; by proving a clean and stable power. The unit itself feels robust, built quality is top notch and even the cables feels high quality. I didn’t observe any coil whine or weird (vibrating) noise coming from the components inside the power supply itself.

However, this power supply is ruined by its fan and/or its fan profile.  Like I mentioned earlier, the fan becomes audible in just around 50% of system load. Anything higher than 50% system load, or specially when the graphics card’s utilization climbs up to 80%-100%, the noise produced by the fan becomes very audible. It sounds like a (sports) car engine, at least with the specific unit that I have.

This specific model has been in the market for quite some time now. So, I am not sure if SilverStone made some changes or tweaks with newer batches of ST1000-PT to fix this issue. I hope they did. If not, I hope the company will improve the noise levels, especially the fan profile on their (future) power supplies. Or at least use a more silent running fan.

Overall, I don’t think that the SilverStone ST1000-PT has a poor quality. I think it performs well, but the noise is holding me back from fully recommending this. As I said, I use the PSU with my test bench, so I am not particularly bothered with the noise. However, I’m pretty sure most users will not buy this for a test bench or use it on a noisy environment. So, if you are looking for a robust PSU but runs silent at the same time, especially under load, you might want to look somewhere else. 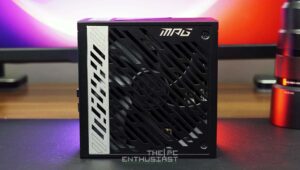