The AMD Radeon Pro Duo is a dual GPU graphics card with two 28nm Fiji XT core on one PCB. It also features HBM technology since this is basically two Radeon R9 Fury X put together. This card is designed for “creators who game and gamers who create” and for VR applications. AMD also tagged this as a workstation-class graphics card. It’s a full length graphics card and it occupies two PCI slots. The Radeon Pro Duo is liquid cooled thanks to Cooler Master (I don’t know if patent issues with Asetek have been resolved already). Under the hood, the AMD Radeon Pro Duo features a total of 8192 (2x 4096) streaming processors, 8GB HBM memory (4 each per core), up to 500MHz (1Gbps) of memory clock speed, a memory bandwidth of up to 512GBps, and a core clock speed of 1050MHz. The Pro Duo is able to offer 16 teraflops of total single-precision floating-point performance and draws its power from 3x 8-pin power connectors. As for connectivity options, the card has 4x DisplayPort 1.2 connectors. 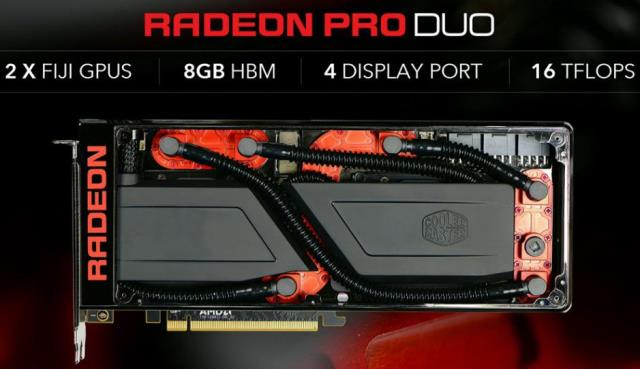 AMD has conducted internal testing of the Radeon Pro Duo early this month; comparing it with its predecessor (the R9 295X2) and NVIDIA’s last known dual-GPU, the TITAN Z. The three cards were tested on an X99 motherboard powered with an Intel Core i7-5960X processor, 16GB DDR4 memory, Windows 10, v15.301 driver for the AMD cards, and GeForce 361.91 drivers for the TITAN Z. Below are the results: Again, this was conducted by AMD, actual benchmark results may differ. I’m just putting the numbers on a graph for better comparison.

The AMD Radeon Pro Duo is said to become available in early second quarter of the year. There’s no exact date, but it’s probably around April or May. It’s also reported to have a retail price of around $1,499 USD.