Just like any graphics card series, all Radeon RX 6900 XT graphics cards in the market are built with the same core components inside. These cards feature a 7nm TSMC Navi 21 GPU, with 5120 stream processors, 80 compute units, 80 ray accelerators, 128 ROPs, and 16GB GDDR6 memory running on a 256-bit memory interface.

These RX 6900 XT cards primarily differ in the aesthetics, cooler, and PCB design. Some AIB advertises or highlights the boost clock speed of their graphics card. But at the end of the day, all of them will boost similarly. Of course, the graphics cards with a better cooling solution will boost higher and/or longer.

Here is a summary of all the RX 6900 XT graphics cards mentioned in this list. It is listed in alphabetical order.

The Radeon RX 6900 XT is currently AMD’s flagship and top-of-the-line GPU. I don’t think we will be seeing a new model or refresh anytime soon from the Red team. I could be wrong though. But, to give you an overview of how this GPU performs, below are some benchmarks.

Note that the results below are from our review of the PowerColor RX 6900 XT Red Devil Ultimate. Other cards may perform slightly faster than the others, and some will be slightly slower. Cooler design and silicon lottery are also at play. But at the end of the day, all of these 6900 XT will perform within the same performance range. Most of the time, the difference is minimal and negligible. 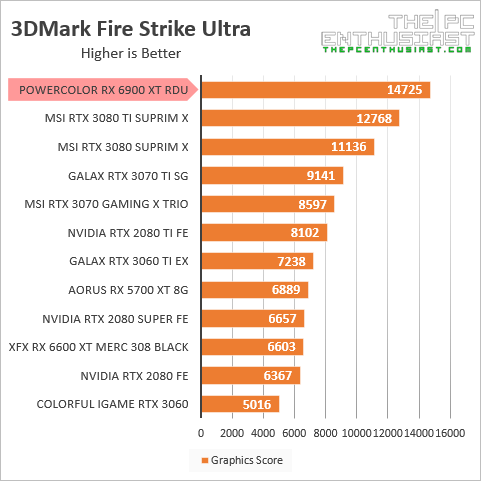 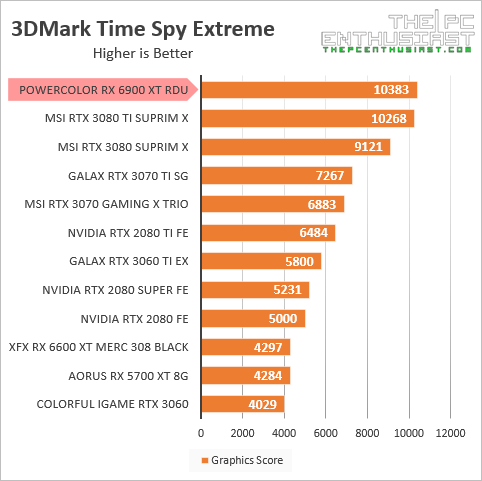 However, both the RTX 3080 Ti and RTX 3090 Ti are more expensive than the RX 6900 XT. So, despite not performing well when it comes to ray tracing, it’s still the cheaper GPU. Cost to performance-wise, the 6900 XT is better.

What RX 6900 XT has the best cooler and great cooling performance?

Most RX 6900 XT has a similar cooling design – a tri-fan cooling solution. But the model that has the best cooler is the ASUS ROG Strix LC RX 6900 XT TOP Edition Gaming and Sapphire Radeon RX 6900 XT Toxic Limited Edition. Both graphics cards feature a hybrid cooling solution. The GPU is water-cooled, while the rest of the components are air-cooled.

This keeps the main components of the graphics cards cool, resulting in higher and longer sustained boost clock speeds, thus offering better performance compared to the air-cooled graphics cards. The only downside here is these cards tend to be more expensive than the air-cooled ones. And just like any other AIO water cooling solution, they are prone to leaking or pump failure.

The MSI Radeon RX 6900 XT Gaming Z Trio seems to be the fastest out of the box. It has a higher game clock speed and boost clock speed compared to the other RX 6900 XT cards. However, since it is air-cooled, the liquid-cooled RX 6900 XT may perform better overall thanks to its superior cooling solution.

Short answer – yes! It is good for 4K gaming and based on our review, it tends to perform on par with the RTX 3080 Ti. Depending on the game title, sometimes it ends up on top, sometimes it’s just a few fps behind. But generally speaking, it can drive games above 60fps at 4K UHD resolution with ultra or highest graphics settings.

While AMD’s Radeon 6000 series graphics card is capable of ray tracing, its performance is simply not on par compared to its NVIDIA counterpart. The Port Royal benchmark below gives us a general overview of how the 6900 XT performs when it comes to ray tracing.

A fast GPU should be paired with a fast CPU or a good-enough-performing gaming CPU. For an AMD-based system, I would recommend a Ryzen 7 5800X3D or one of the latest Ryzen 7000 Zen4 CPUs. However, the latter is a more expensive system. For Intel, I recommend the latest 13th gen Intel Core Raptor Lake CPUs or the previous 12th gen Alder Lake CPUs if you spot one at a good deal.

No, definitely not! Based on our review of the RX 6900 XT, the GPU is being bottlenecked by the 1080p resolution. And in some games, there’s a huge performance drop. It’s a waste of power and performance.

All the RX 6900 XT graphics cards listed here are great. It’s really up to you which one would you prefer, or which would suit your build, and most importantly what fits your budget. But if I’m not being picky, I’d go for whichever is the cheaper card. All of these are great performing cards. Sometimes, the manufacturers or the retailers just price the product differently/higher.

First on our list is the ASUS TUF Radeon RX 6900 XT OC Edition. The TUF edition is generally a great performing graphics card. It doesn’t have an over-the-top factory overclock, but it offers moderate overclock settings out of the box. It features an axial-tech fan design with dual ball fan bearings. The middle fan rotates in the opposite direction for better airflow. It also has a nice “industrial look”, with an overall dark color theme. The TUF logo right below the PCIe power connectors comes with RGB lighting. It’s not really a head-turner but adds a little flare.

Nevertheless, the Gaming Trio, in general, is a good graphics card design with a good cooling solution. And this Gaming Z Trio in particular has the fastest clock speeds out of the box, compared to the other RX 6900 XT in this list. It features a Tri Frozr 2 cooling solution, similar to the RTX 3070 Gaming X Trio we reviewed. This card runs silently and there are RGB lighting on the sides and a bit on the front portion.

The PowerColor Red Devil RX 6900 XT is a beast. Not only in name but it has that “devilish design” as well. By default, the rear-end has bright red lighting but can be customized to different colors. It features an industrial and rugged look, similar to Asus’ TUF cards.

There are two variants of the Red Devil, the Ultimate and the non-Ultimate (just Red Devil Gaming). Both cards look exactly the same and come with the same features, like the BIOS switch. The main difference is the clock speeds (see specs table above). To be honest, I’d go for the cheaper one, and the non-Ultimate is cheaper than the Ultimate version. Both cards will perform similarly at the end of the day. Not sure what’s “ultimate” about the other version, when its only advantage is a ~100MHz increase in the clock speeds.

Sapphire’s Radeon RX 6900 XT, the Nitro+ Special Edition is one unique-looking graphics card. Unlike the other cards in this list, this one has a lighter color scheme. There is RGB lighting on each fan and there is RGB lighting on the side, as well as the logo at the back. The backplate has a silver color finish, and similar to the Asus TUF, its (smaller) middle fan spins in the opposite direction.

XFX’s approach with their Speedster MERC319 design is an all-black graphics card with silver trim or accent. There is no RGB lighting, but the logo on the front-side portion has white LED lighting. Although, not exactly the same card and GPU, our review of the MERC 308 RX 6600 XT, gives us a hint that the MERC319 is a good graphics card overall.

If you are looking for something extreme and want the best performance (regardless of the cost), enter the water-cooled RX 6900 XT. There are two models that are available. But be warned, these graphics cards are more expensive than the air-cooled ones.

First is the ROG Strix LC Radeon RX 6900 XT TOP Edition from Asus. The company calls this card a “liquid-cooled leviathan”. It features a 240mm radiator with 600mm tubing for compatibility with EATX chassis and different mounts. There’s also a blower-type fan on the card itself to cool the other components. Finally, it’s not a ROG Strix without some RGB lighting. The two 120mm fans on the radiator have RGB, as well as on the front shroud. And since it’s water-cooled, this card only occupies two PCI slots.

Last, but not least, is the Sapphire Toxic Radeon RX 6900 XT Limited Edition. This one is even “crazier” than the Asus ROG Strix LC, with its huge 360mm radiator and a slightly larger 2.5 slot form factor. The active cooling fan on the card is also larger and features a hybrid fan blade design. There is also RGB lighting on the front, side, and logo at the backplate; and the three fans on the radiator as well. Unlike Asus’ liquid-cooled card, Sapphire’s Toxic has a software BIOS switch. Users can choose to run the card in performance mode or silent mode.

That’s all for now. Which do you think is the best RX 690 XT graphics card for your use case? All of these cards are great in their respective way and offers a unique look and design.