We continue Talion and Celebrimbor’s journey on Middle Earth Shadow of War, the sequel to Shadow of Mordor that was released in 2014. The first Middle Earth game was fun and exciting but there are rooms for improvement, and we can see these improvements in the Shadow of War. Monolith Productions has added more game features with larger maps, different areas, more quests and activities. In Shadow of War, you could also build your own army with the help of Orcs serving under the Bright Lord, and conquer other fortresses. New characters are also introduced as well as Orc ranks, and then there are beasts you can dominate and mount on and many more. Shadow of War was released back in October 10, 2017 and within the first few weeks or month of its release, there were some bugs that needed attention. Today, most of those bugs were already ironed out or fixed and we’re just waiting for new DLCs to come out. In this review, we’ll focus on the graphics performance of the game and let’s see what graphics card is best suited to play Middle Earth Shadow of War. No spoilers in this review though, so go ahead and check our review if you haven’t get yourself a copy yet. About this Game:
“Go behind enemy lines to forge your army, conquer fortresses and dominate Mordor from within. Experience how the award winning Nemesis System creates unique personal stories with every enemy and follower, and confront the full power of the Dark Lord Sauron and his Ringwraiths in this epic new story of Middle-earth. In Middle-earth™: Shadow of War™, nothing will be forgotten.”

We continue the story of Talion and Celebrimbor as they forge a new Ring of Power to build their own forces to defeat Sauron. The event took place between The Hobbit and The Lord of the Rings. The game also features an improved Nemesis System, where Talion can dominate and gain Orc followers, build your own army and conquer other fortresses, turning Sauron’s army against him.

The Middle Earth Shadow of War is available to download via Steam; it’s available in standard edition, Silver Edition (includes Slaughter Tribe Nemesis and Outlaw Tribe Nemesis Expansions and Silver War Chest) and Gold Edition (includes Slaughter Tribe Nemesis, Outlaw Tribe Nemesis, The Blade of Galadriel Story, Desolation of Mordor Story Expansions and Gold War Chest). You can also download the high resolution texture pack and 4K cinematic pack for free to further improve the “immersive-ness” and visual fidelity of the game, specially if you are using a 4K monitor. When you adjust the scaled resolution, you can see on the right side of the screen how much system and video memory is required to the drive that game at that resolution. The memory needed is also affected by the texture quality found on the advanced settings. However, we later find that a 3GB or 4GB of VRAM is sufficient to play this game. But driving more frames per second is another story and will depend on the processing power of the GPU. 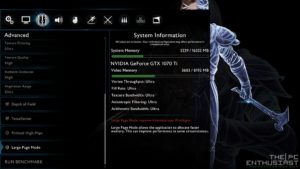 Above are the following options for the advanced graphics settings. You can use the Auto Config that will depend on the current hardware installed on your system, or choose a graphics preset quality. You can also individually adjust some settings to further fine tune your game experience or in case you need to tone down some settings to achieve a more playable frame rate.

Enabling the Preload High Mips and Large Page Mode could give you a little bit more boost and stable frame rate, but these are really optional. We stick with the graphics preset when we tested and played the game. Very High or Ultra is where you want to play this game. For me graphics quality is acceptable at high settings, but you get more visual fidelity at very high or ultra settings. There’s actually minor difference between very high and ultra and you can observe them on the screenshots on the next page.