Samsung recently released their latest storage solution, the Samsung 870 QVO SATA SSD series. It’s basically an improved or enhanced version of its 860 QVO predecessor. A new controller and 2nd generation QLC NAND flash is what the new 870 QVO SSD series are made of. But how does this new drive compare against its predecessor, the 860 QVO, and the much older but still popular 860 EVO? Let’s find out below.

In this comparison, we’ll be dividing the comparison into several groups. I’ll discuss first the controller, NAND flash type and capacities available in each series. Next, let’s talk about the difference in their performance. And finally, and perhaps the most crucial deciding factor, is the price.
Note that we have yet to get our hands on a Samsung 870 QVO SSD at the time of writing. So, most of the data shown here are from Samsung’s specifications sheet. However, we did previously review the QVO and EVO series here. Additionally, I was able to read some of the early reviews of the 870 QVO; basically, confirming my speculations and expectations.

I noticed that Samsung uses the terms “4bit MLC” and “3bit MLC” instead of QLC and TLC. Perhaps they are trying to avoid using the term “QLC” since many are aware that the QLC NAND flash is the slowest type. TLC or 3bit MLC is above QLC; then MLC or 2bit on second spot; and the fastest is SLC or 1bit single-level cell.

When it comes to warranty, Samsung offers a 3-year limited warranty for both the 870 QVO and 860 QVO SSD series. Meanwhile, the 860 EVO comes with a longer 5-year warranty period.

The Samsung 860 EVO SSD excels in both warranty period and Total Bytes Written as well. Having a TLC NAND flash, the 860 EVO has a higher endurance compared to the 870 QVO and 860 QVO. You can see that from the table below.

If you are familiar with the different types of SSDs and different NAND flash memory, I’m sure by now you have an idea which SSD series is faster. Like I mentioned earlier, TLC NAND flash are typically faster than QLC NAND flash. Below are the drives respective sequential and random read and write speeds. 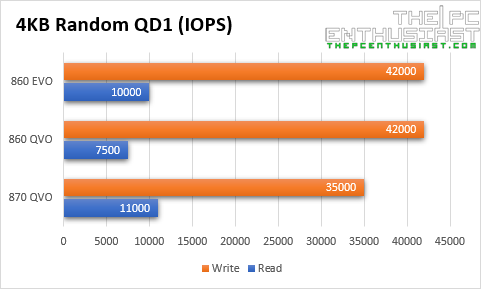 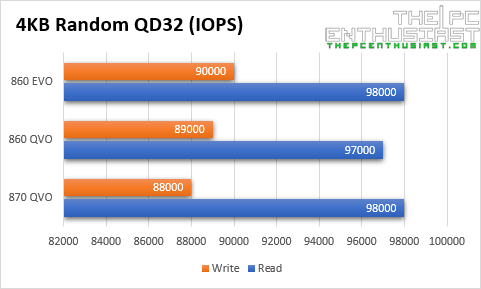 However, Samsung has a trick called Intelligent TurboWrite technology. Thanks to this technology, the Samsung’s QLC-based SSD is able to achieve SLC or TLC-level of performance. But for a limited size only, depending on the capacity of the drive’s TurboWrite size.

Below is a table showing each SSD series’ total TurboWrite size and the next graph shows the performance of the drive after the TurboWrite allocation has been exhausted. The total TurboWrite is the sum of the SLC buffer (typically 6GB or less) and the “Intelligent” TurboWrite region ranges from 36GB to 72GB on a 1TB to 4TB SSD capacity. 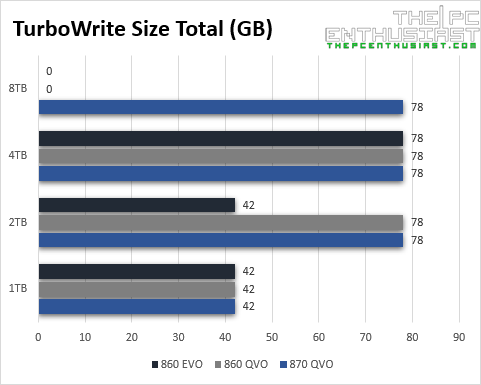 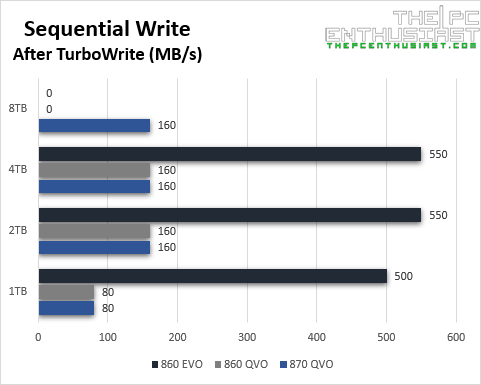 That drop is really significant, to the point that after the cache has been exhausted, it almost feels like you are copying files to a hard disk drive rather than an SSD. Yes, that was my experience when I transferred my game folder, with a size of almost 1TB, to a Samsung 860 QVO SSD.

Meanwhile, both the 860 QVO and 860 EVO has been in the market for quite some time now. Prices are already adjusted since their respective series was launched. However, at the time of writing, it seems that the 860 QVO is a bit cheaper compared to the 870 QVO, while the 860 EVO are still more expensive than the 870 QVO (depending on the capacity).

If you are after for value (price/GB) and not speed, the obvious choice would be the 870 QVO or the 860 QVO. As long as you do not exhaust the allocated TurboWrite capacity, you will not experience the significant drop in performance.

However, if you are looking for a balance of speed, performance and reliability, the 860 EVO SSD series would be the obvious choice. The 860 EVO has a much stable read/write speed, longer endurance rating and longer warranty period. Not to mention, the 860 EVO is available in M.2 form factor as well.