Like I mentioned earlier, we are going to review both the SanDisk Extreme PRO Portable SSD V2 and the Extreme Portable SSD V2 (non-Pro) in this article. Both drives are mostly similar, being a portable SSD. They mainly differ in physical size and speed.

Here is something important the consumers should be aware of before buying the newer Extreme PRO Portable SSD V2. This portable SSD doesn’t use Thunderbolt technology. Instead, it uses a USB 3.2 Gen 2×2 interface that is capable of up to 20Gbps of transfer speed.

I am not going down deeper into this “USB-rabbit-hole” in this review. But if you want to take advantage of the full speed of the drive’s theoretical speed, you need to use the proper USB cable and plug it in the right USB interface. What happens if you plug it in an older version of USB? Don’t worry, because it’s backward compatible. But the speed will be limited to the interface’s bandwidth.

SanDisk is marketing the portable SSD V2 to photographers, videographers, content creators, basically anyone who needs a rugged and though portable SSD with a fast read/write speed. In my case, I use this as an (external) game drive, since I test and use a couple of different test systems.

Both the Sandisk Extreme PRO Portable SSD V2 and non-Pro Portable SSD V2 are IP55 certified. This means that these drives have dust protection and water-resistant. It is NOT water-proof, but it can resist water from low-pressure jets from all directions (6.3mm nozzle). In addition to the IP55 rating, both also have 256-bit AES hardware encryption with password protection using SanDisk’s software.

Below are the specifications of both drives. On a separate table, I listed the capacity available and the model number of the new V2 variants, including the previous version.

The Extreme PRO Portable SSD V2 is slightly larger than the non-Pro variant. They look very similar, with a dark blue or dark navy blue color and an orange accent. The PRO version has an aluminum core for added durability and heat dissipation. It’s the orange lining on the middle of the drive. Meanwhile, the non-PRO variant is mostly made of ABS plastic and silicon. Both drives do have a silicon layer at the back. Check the hardware design below.

The Extreme PRO Portable SSD V2 is slightly larger but it has a better build quality and chassis compared to the non-Pro variant.

Both SanDisk portable SSD V2 drives use a USB Type-C interface. It’s best to connect them to their respective similar interface. But they are backward compatible as well, at the expense of transfer rate.

Also, notice on the second photo (right-hand side), you can tell that the orange portion on the Extreme PRO is metal (Aluminum). Whereas the one on the non-PRO is just plastic. It’s not even supported by an internal (metal) frame. Between the two drives, I’d say the Extreme PRO Portable SSD V2 is more rugged and durable.

In testing the SanDisk Extreme PRO Portable SSD V2 and non-PRO; I am using an AMD system with an MSI MEG X570 ACE motherboard powered with a Ryzen 7 3700X. This motherboard has a USB 3.2 Gen2 10Gbps interface, so it should be able to cater to the non-PRO’s speed.

However, it doesn’t have a USB 3.2 Gen2x2 20Gbps interface. So, I will be using the SilverStone ECU06 SuperSpeed USB 20Gbps / USB-C 3.2 Gen 2×2 PCIe expansion card on the motherboard. This will be able to take advantage of the Extreme PRO’s speed. Below are the specifications of the system I used.

AJA system test uses video files to test the read and write speed of the drive; it’s mostly sequential. Both the Extreme Pro and non-PRO Portable SSD V2s were able to come close to their respective advertised speeds. I would not expect them to go beyond 2,000MB/s and 1,000MB/s respectively. 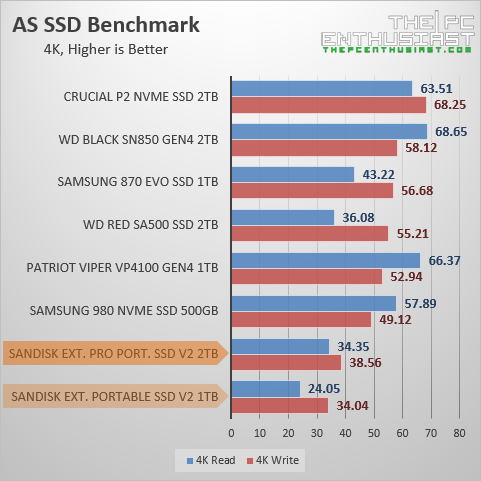 We can also see a similar result on the sequential test of AS SSD benchmark. However, both portable drive’s 4K random performance isn’t that great in this test. 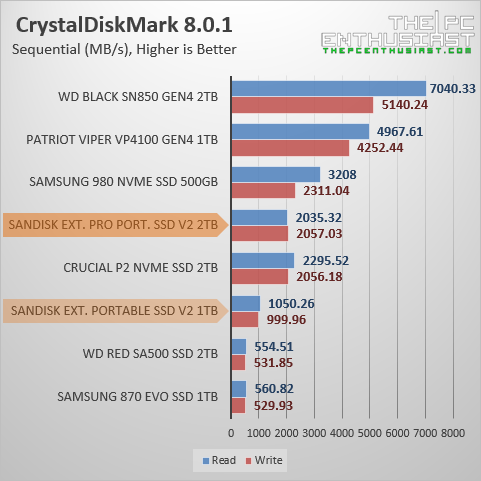 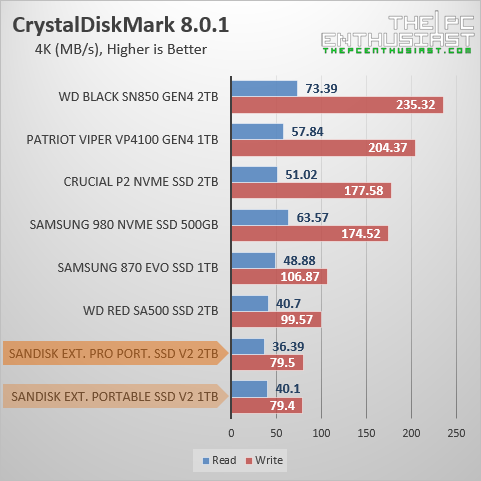 We can see a similar result using the CrystalDiskMark benchmark for the sequential test. But, similar to what we got in AS SSD, both drives do not perform quite well when it comes to 4K random workloads.

What does it mean if a drive does not perform well in random workloads? Although, both drives are still significantly faster than a hard disk drive; reading and/or writing on the drive simultaneously, or executing multiple read and/or write workloads in parallel will take more time to complete. Its random performance is similar or close to a SATA SSD, but it’s still a little bit slower.

If you are just saving some files to the drive, single workload; or retrieving files from the portable drive, again single workload, then I wouldn’t worry too much about it. It won’t stress the drive and it will finish the task without any hiccups. 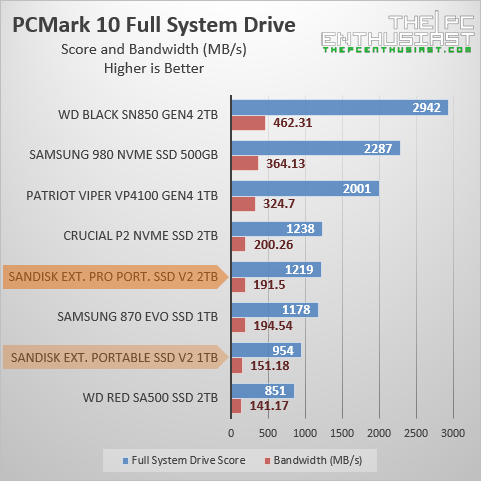 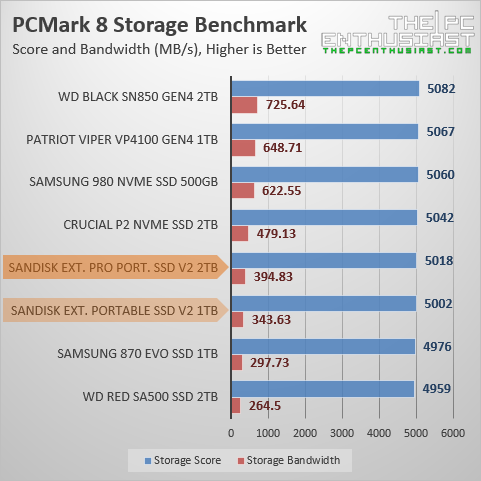 Finally, we tested both drives using PCMark 10 and 8’s storage benchmark test. Both tests are intensive and take about an hour (or more) to finish. These tests use a wide-ranging set of real-world traces from popular applications (Adobe Creative Suite, Microsoft Office), and common tasks to fully test the performance of these modern drives. This will give us a more realistic expectation of a drive’s performance and a closer to a real-world testing scenario.

As you can see from the results above, both the Extreme PRO Portable SSD V2 and the non-Pro performs faster than a SATA SSD, generally speaking. The non-Pro did trail behind the Samsung 870 EVO SSD in the Full System Drive test. But I guess it’s because of its somewhat lackluster random performance.

The Extreme PRO is almost on par with an entry-level M.2 NVMe SSD like the Crucial P2. That’s not bad, considering that most external portable drives in the market are limited to 10Gbps of transfer speed only. Okay, time for some real-world tests.

So, the numbers look impressive. But how does it perform in the real world? To see how both drives perform, I have two folders prepared to be copied to the portable drives. The first one is a folder of my Cyberpunk 2077 gameplay recordings. There are several video (mp4) files in that folder, with a total of 109GB.

The second folder is the game folder of Final Fantasy XV, about 171GB in total. The game folder contains a lot of files, both compressed and uncompressed; with large and smaller file sizes.

I also tested copying from two different sources. One is from a non-OS secondary drive, the Samsung 980 PRO Gen4 SSD. This is to avoid any possible bottlenecks or system interruption. The second is directly from the desktop. The OS drive is an ADATA Spectrix S40G Gen3 SSD, not as fast as the Samsung 980 PRO, but it’s still a bit faster than both portable drives.

Below are the same copy tasks, except that they are about to complete copying the video files. As you can see, both drives were able to copy 109GB of video files without any significant drop in speed. By the way, both drives were already populated when I did these tests; about more than half of their capacity.

What if we copy them from the Desktop (OS drive)?

Here’s what it looks like if I try to copy the same video folder but from the desktop. As you can see, the transfer rate is not consistent; even though it’s copying (compressed) video files. Perhaps it’s because we are copying from the OS drive. Other tasks are running in the background and the system may have been reading/writing on the drive while copying the files to the Portable SSD V2 drives.

Now, how does it perform when we copy a folder that contains several different (compressed and uncompressed) files? Well, it doesn’t look good; similar to the random results I got with the synthetic benchmarks.

As you can see from the screenshots above, copying a 171GB Final Fantasy XV game folder took quite a while to finish. The speed varies a lot, depending on the type and size of files being copied. The speed tends to drop when copying smaller and/or uncompressed files. Meanwhile, it ramps up with larger compressed files.

Both drive were able to finish copying the game folder in less than 20 minutes, with the Extreme PRO being just slightly faster or earlier to finish. That’s not actually fast, since copying a 109GB video folder only took about 3 minutes to complete.

It was significantly slower, again, because I was copying a game folder; containing several different file types and sizes. Looks like random (read/write) workloads are the weakness of these portable drives.

The improved and updated version of SanDisk’s portable storage drives are fast and reliable storage solution. I like the design and aesthetics of both drives. But I would lean towards the Extreme PRO since it has a better build quality and materials used compared to the non-PRO variant.

Both drives have an IP55 rating; meaning that they are dust and water-resistant, but not water-proof. They also have 256-bit AES hardware encryption and you can set up a password using SanDisk’s software if you want your files to be protected.

Pros and Cons; Which One to Get?

Perhaps, one question that you might be asking is, “which one should you get if ever”? “Which one is the better deal”? Obviously, the (non-Pro) Extreme Portable SSD V2 is cheaper than the PRO version. There are also a lot of devices today that use USB 3.2 10Gbps connectivity. Meaning, you’ll be able to take advantage of its maximum potential speed. But the downside of the non-Pro is that it is not as rugged or tough compared to the PRO version.

Meanwhile, if you are looking for a faster drive with better and solid build quality; you might want to consider the Extreme PRO Portable SSD V2 instead. Real-world copy test shows that it’s not necessarily twice as fast compared to the non-Pro variant. But it’s still faster than the non-Pro, especially when it comes to handling (large) compressed files. However, both the Pro and non-Pro portable drives suffer when copying multiple files with varying sizes and types.

The closest competition of the non-Pro variant is the Crucial X8 (review here). It’s also a good portable SSD with similar speeds to the Extreme Portable SSD V2. And on top of that, the X8 features a solid aluminum body. It does get warm to the touch though, or hot depending on the load. But it’s usually cheaper compared to SanDisk’s offering.

As for the Extreme PRO; currently, there’s not a lot of portable SSDs that use 20Gbps connectivity. There are portable drives that use the faster Thunderbolt 3 interface; offering around 3,000MB/s of transfer speed. But they are usually more expensive as well. Speaking of Thunderbolt 3, I tested and connected the Extreme PRO to see if it will run at 20Gbps via the T3 interface. Unfortunately, it only ran at 10Gbps. It worked, but speed is limited to 10Gbps only.

At the end of the day, both the SanDisk Extreme PRO Portable SSD V2 and Extreme Portable SSD V2 are excellent portable drives. Just choose which one you’d prefer most; depending on your budget, uses case, or what available ports/interface your system has.