DeepCool will be releasing their new twin tower CPU cooler dub as the DeepCool GamerStorm Assassin II. The GamerStorm Assassin II features two large aluminum fin stacks with eight nickel-plated copper heat pipes and a nickel-plated copper base. It comes with two types of fan, one 120mm push fan and another 140mm fan that act as a conveyor. More details after the jump. 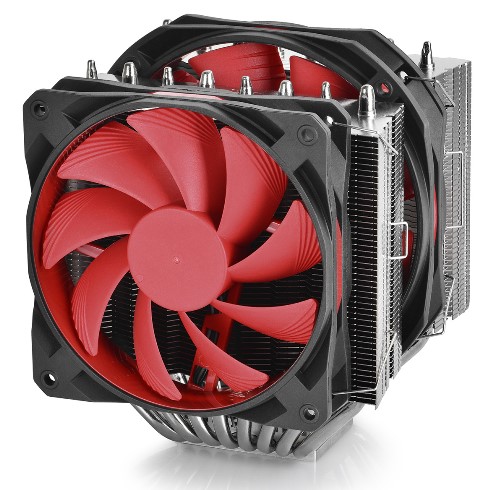 The DeepCool GamerStorm Assassin II measures 143mm x 158mm x 167mm and weighs 1.48kg, including the fans. That’s a really huge CPU cooler, but this is not the first of its kind. It’s somewhat similar to Noctua’s NH-D14 having two types of fan but comes with 2 more heat pipes.

So far these are the things we know about DeepCool’s latest CPU cooler. It wasn’t disclosed how much TDP it can handle and if it can handle hot CPUs like an AMD FX-9000. With regards to its price and availability, there are no words yet.

I’m curious how the GamerStorm Assassin II would compete against other high-end CPU cooler like the Noctua’s NH-D14 and NH-D15, or Cryorig’s R1 Ultimate. Hopefully, we will find that out soon.